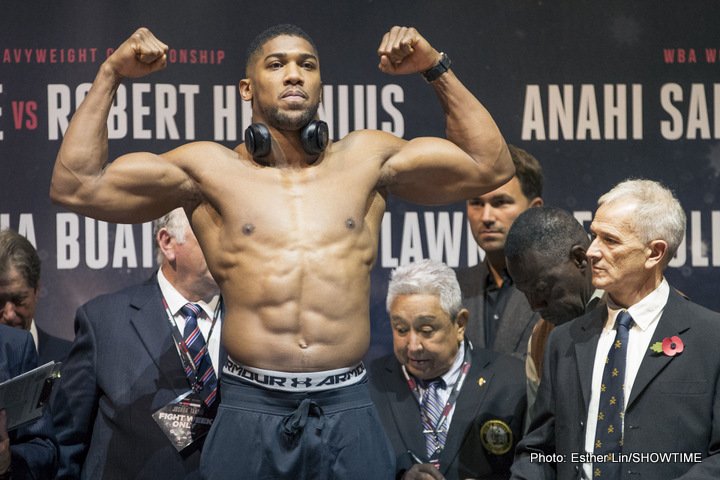 Anthony Joshua, the reigning and undefeated WBA and IBF champion, is certainly sounding as though he feels he is The Man, the top dog, of his weight division – the man who calls the shots. Ahead of his three-belt unification fight with WBO ruler Joseph Parker, AJ has come out and said that unless he “gets realistic,” WBC ruler Deontay Wilder will be “frozen out” in terms of getting the big fight with him.

Speaking with BBC Sport, Joshua said that, unless Wilder makes a serious effort at negotiating a fight with him, “we (AJ and his promoter Eddie Hearn) will freeze him out.”

“If he was serious about the fight, we’d do serious negotiation. If not, stop hooting and hollering because we’ll just freeze him out,” Joshua said of the unbeaten Wilder. “We’re in a position where I’ve still got great top-10 challengers I can compete with. He’s in a position where the broadcasters aren’t interested in [Wilder fighting] ‘Joe Bloggs’ any more. I know where I am going with my career. If he wants to be part of this and jump on the train and come to the UK, he has got to be realistic and stop living the fantasy. That is all we are saying, be realistic in negotiations.”

But as much sense as what AJ has said seems to make, here we have a problem: Shelley Finkel, who works with Wilder, has said publicly that Hearn has not been in touch regarding the making of a Joshua-Wilder fight this year – not yet anyway. Wilder, who is expected to be in Cardiff for the Joshua-Parker fight, will likely argue how he has had NO CHANCE to be realistic in negotiating, simply as he has not had the chance to sit down and negotiate.

Maybe, hopefully, some real and serious negotiating WILL take place whilst Wilder is in the UK. Wilder insists he will fight Joshua anywhere, but he also claims AJ and Hearn want no part of him. Who’s fooling who? Bottom line, the fans don’t care; they simply want to see Wilder and Joshua get it on and fight – this year.

We can’t have this guaranteed explosion of a super-fight wind up like Lennox Lewis-Riddick Bowe, can we?