The official weights are in for tomorrow night’s world heavyweight title fight between champ Anthony Joshua and challenger Oleksandr Usyk.

To no one’s surprise, Joshua scaled considerably heavier than Usyk, coming in at 240 pounds to the former undisputed cruiserweight champ’s 221 pounds. Still, despite AJ having an almost 20-pound weight advantage over Usyk, 240 is one of Joshua’s lowest-ever weights.

The overwhelming thought many people have is, AJ has come in light because he plans on using a lot of movement, of being agile in the ring.

Does Joshua plan to outbox Usyk? Usyk, who at 221 is the heaviest he has ever been in his career, is, as we know, a master boxer. Is Joshua making a mistake if he tries to match wits and skills with Usyk? Has Joshua already made a mistake by coming in too light?

Both men look to be in superb physical condition, with all the hard work done in the gym. We really could be in store for a fascinating fight, a great fight perhaps.

Most experts are picking Joshua, yet there are a good number of judges who feel Usyk will pull it off. Also, when it comes to the experts who are picking Joshua to get the win, plenty of them have added the caveat – ‘if Usyk is still there in the later rounds, Joshua could be in trouble.’

Quite a few critics feel Joshua has weighed too much, that he has carried too much muscle in some of his past fights and that this caused him to come perilously close to running out of gas. Now, at a svelte 240, some people wonder if AJ has come in too light. It’s a tricky balance, that’s for sure.

Some fans, when tomorrow’s fight was first announced, felt Joshua would come in strong and heavy, his plan to roll right over the naturally smaller Usyk. Now, however, plenty of us are expecting to see a boxing match, a chess match perhaps.

Prediction: Usyk comes through some early pressure, proceeds to outbox Joshua, and, in the later rounds, when the defending champion is fatigued and confused, Usyk stuns us all by getting the stoppage win. 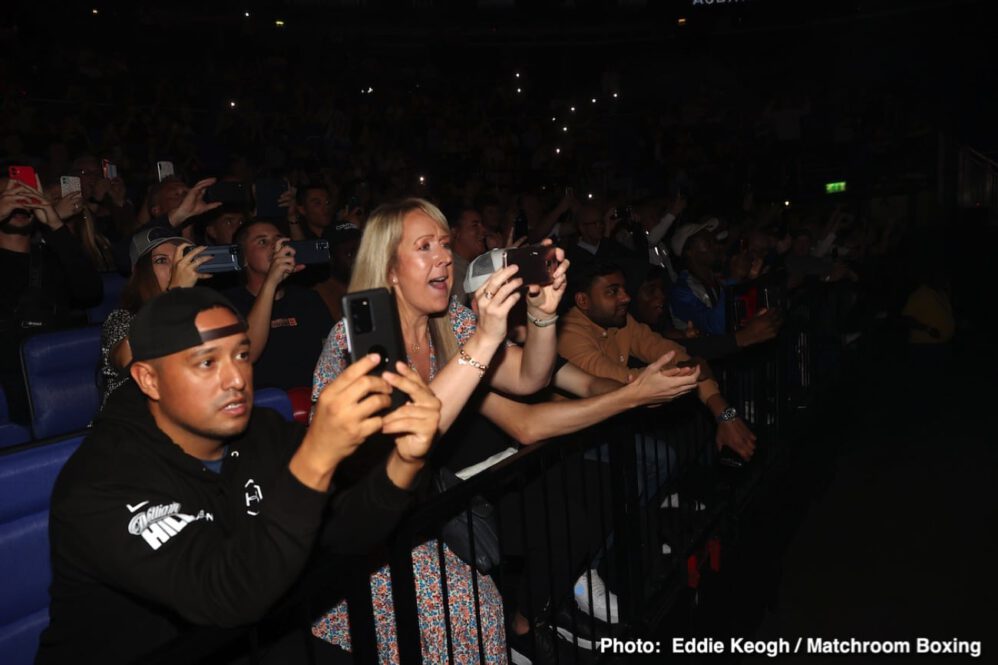 Anthony Joshua and Oleksander Usyk Weigh In ahead of their World Heavyweight Title clash tomorrow night at the Tottenham Hotspur Stadium in London 24 September 2021 Picture By Matchroom Boxing. Fans enjoy the weigh-in. 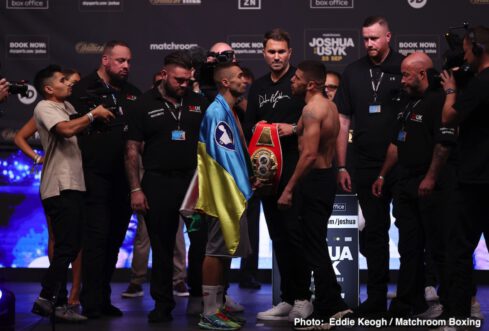 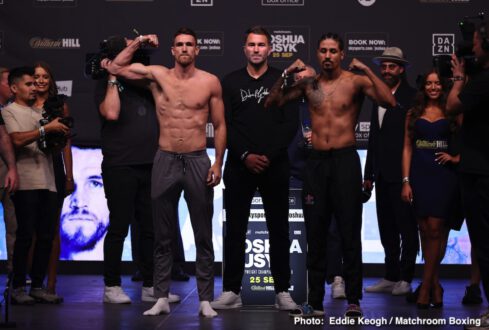 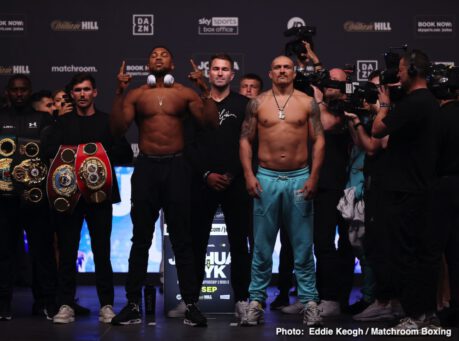 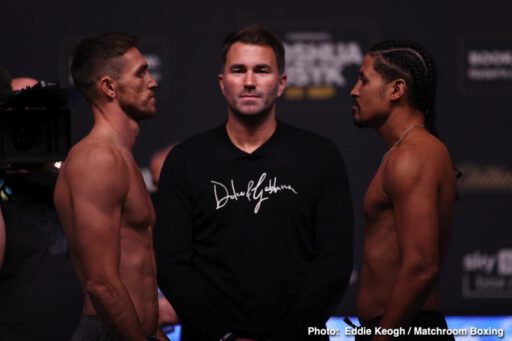 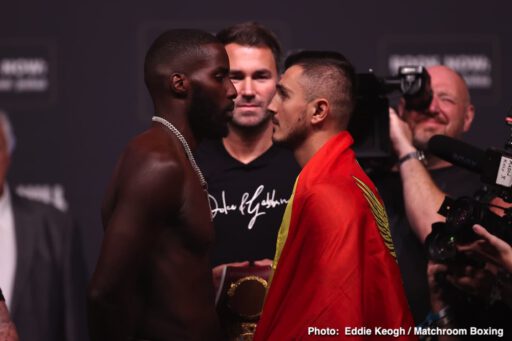 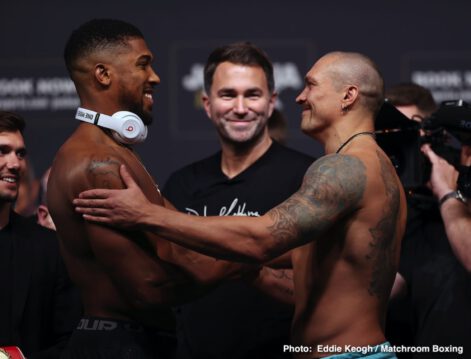 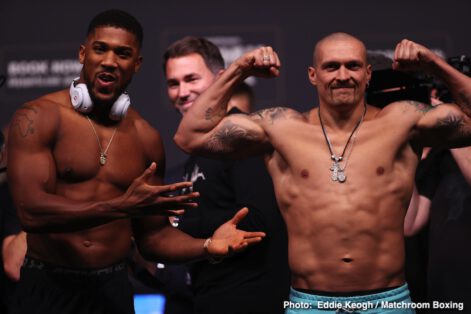 Anthony Joshua and Oleksander Usyk Weigh In ahead of their World Heavyweight Title clash tomorrow night at the Tottenham Hotspur Stadium in London 24 September 2021 Picture By EDDIE KEOGH Matchroom Boxing. The fighters face off. 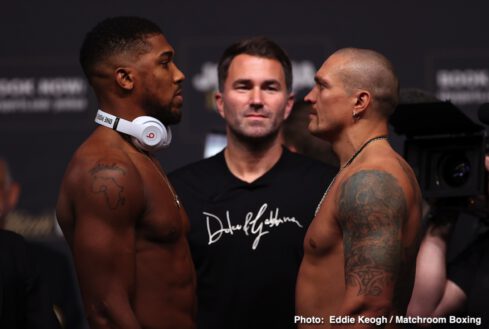 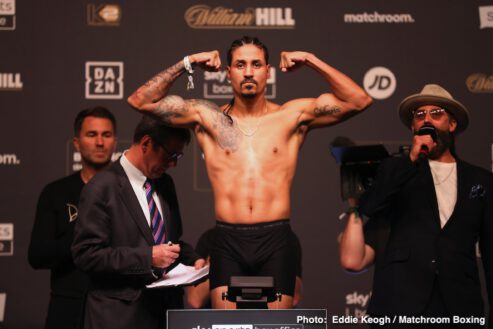 Callum Smith and Lenin Castillo Weigh In ahead of their Light-Heavyweight fight tomorrow night at the Tottenham Hotspur Stadium in London 24 September 2021 Picture By Ian Walton Matchroom Boxing. Lenin Castillo. 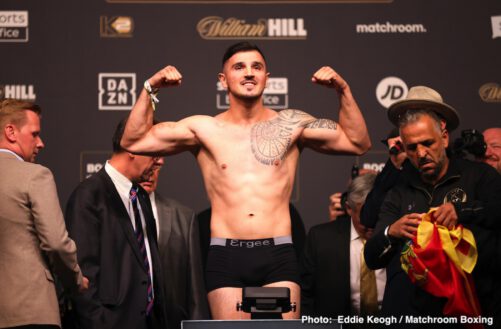 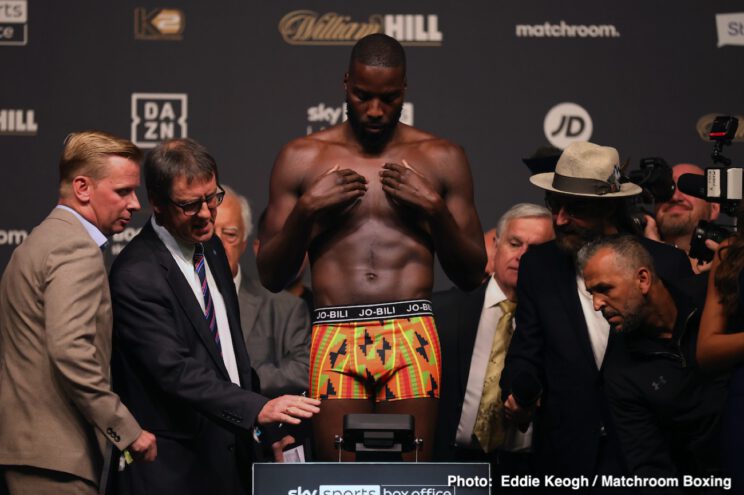 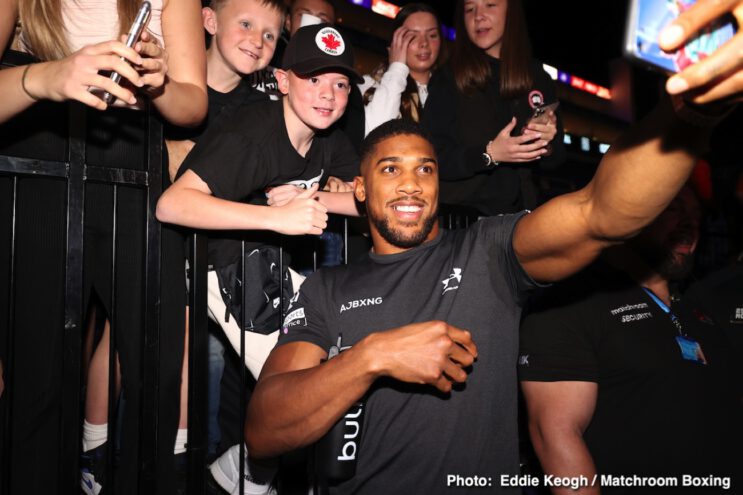