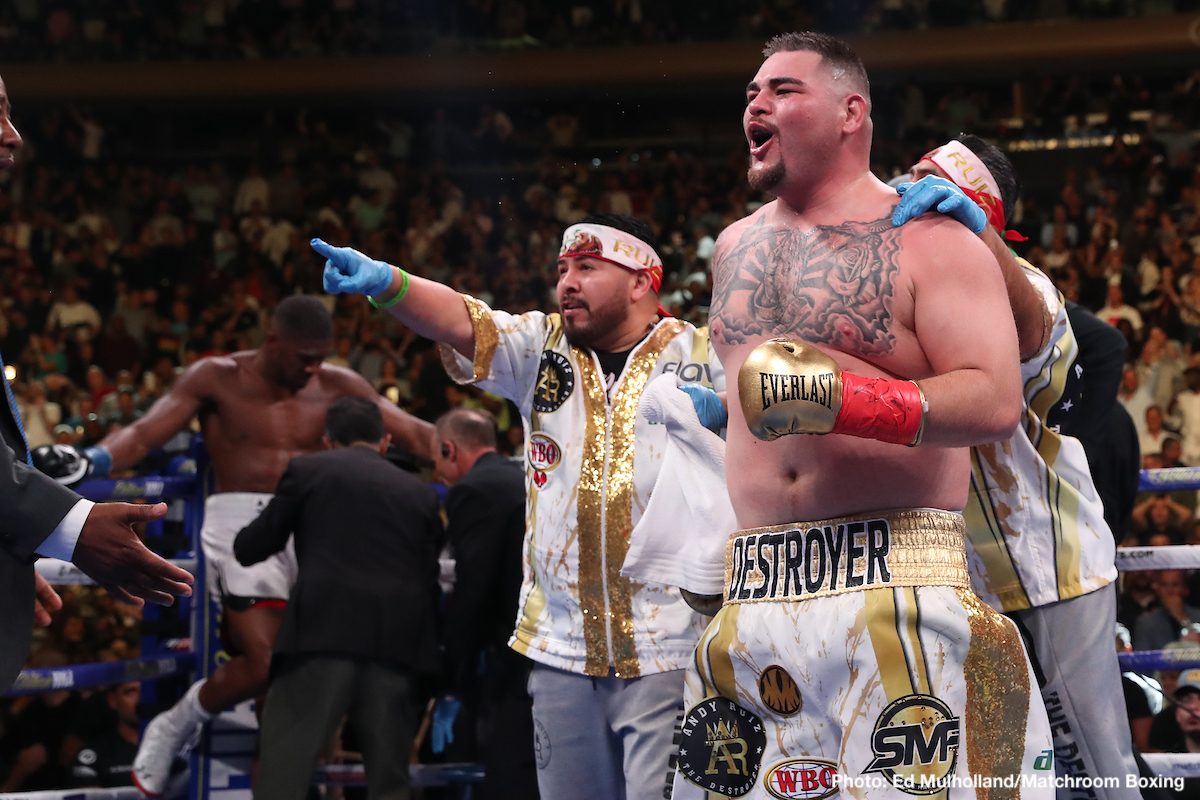 Andy Ruiz Jr. says he’s the one calling the shots when it comes to the location of his rematch with former IBF/WBA/WBO heavyweight champion Anthony Joshua. Ruiz Jr. (33-1, 22 KOs) dethroned Joshua last weekend in stopping him in the seventh round at Madison Square Garden in New York.

Joshua’s promoter Eddie Hearn wants the rematch with Ruiz to take place in the UK, and he seems to be pretty confident he’ll get his way on that. Not so fast. Ruiz says he’s going to speak with his adviser Al Haymon to find out what he thinks about where the rematch should take place. But far as Ruiz is concerned, he’d like the second fight with Joshua to take place back in New York or in Los Angeles, California.

“I don’t want to let those belts go. I’m going to stay dedicated,” said Ruiz Jr. to AB Boxing News. “I have the upper advantage right now [in negotiation position for a Joshua rematch]. I know that’s what he says [that Hearn and Joshua want rematch in the UK]. As long as I talk to Al Haymon and my team, we’re going to figure it out where. It really doesn’t matter where, as long as we get back in the ring if we show the fans what they want to see,” said Ruiz.

Ruiz says it doesn’t really matter where the location of the rematch with Joshua takes place, but at the same time, he says he’s got the advantage in the negotiations. What good is having the advantage in negotiations if you’re not going to to use it? If making the most money is the goal for Ruiz, then a rematch in the UK could bring in the most green stuff. But it’s also a place where Ruiz might lose, because things could be different with the officiating, and there’s always a chance for controversy.

Last Saturday’s fight in New York was neutral venue if anything. Ruiz’s fan base is in Southern California, not New York. Joshua had more boxing fans in the audience at Madison Square Garden then Ruiz did. The fight might as well have in the UK. It was a Canadian referee, and one judge was from the U.S, another from Canada and the third from the UK. Ruiz made sure that the judges didn’t have a say so in the final outcome of the fight.

“I’d love to have it here [New York] or in LA,” said Ruiz Jr. about wanting the Joshua rematch in the U.S. “I don’t know,” said Ruiz when asked if the rematch with Joshua will happen right away or later on. “I have to look at the contract. I’m the champion. I call the shots now. So we’re going to see what happens. It make me feel good having to shut-up all the British people, and all the people that were doubting me. They’ve been doubting me all my life. The way I look,” said Ruiz.

“It`s a very special moment for this country,” said Sulaiman to wbcboxing.com. “Andy has done what no other Mexican man has done. He himself told his Mother we don`t have to struggle any more. Andy has been a NABF Champion. He`s now a Champion of humanity and inclusion. He knows courage, having climbed back off the canvas to win. With hard work you can achieve anything and everything! We are happy to greet Andy in Mexico. His Family are proudly Mexican. They and Andy can visit Mexico where we will welcome them with open arms.”

It sounds good. Ruiz vs. Joshua would do well in Mexico City in the giant stadium there. The only question is would Joshua’s promoter Hearn go along with the idea of having the fight take place in Mexico? Joshua’s career would be on the line. Joshua can absorb one loss to Ruiz, but not two. A second defeat would rip apart Joshua’s career. It might be the end for him as a major player in boxing.

“The plan is to get in really good shape, and look better,” said Ruiz. “I’m not trying to stay like this. I know I can have more ability being in shape, looking like a Mexican AJ. I just got to work hard to keep these belts,” said Ruiz.

Ruiz is making a mistake in talking about wanting to lose weight. He’s been heavy his entire career. If he loses the fat that he on him, he could weaken himself like fighters in the past when they tinkered with their physiques by working too hard to make it look good. Even in other sports like the NFL, players that have worked too hard to get in shape by losing weight often hurt their careers. Ruiz needs to continue fighting in the 260s until end of his career. Once his career is over, he trim down, watch his weight and live healthy. For guys that are bulky like Ruiz, they’re stronger when they’re heavy. You take that away, and Ruiz will be vulnerable. Joshua’s best chance of beating Ruiz may be if he trims down too much weight, and loses muscle and power along the way.