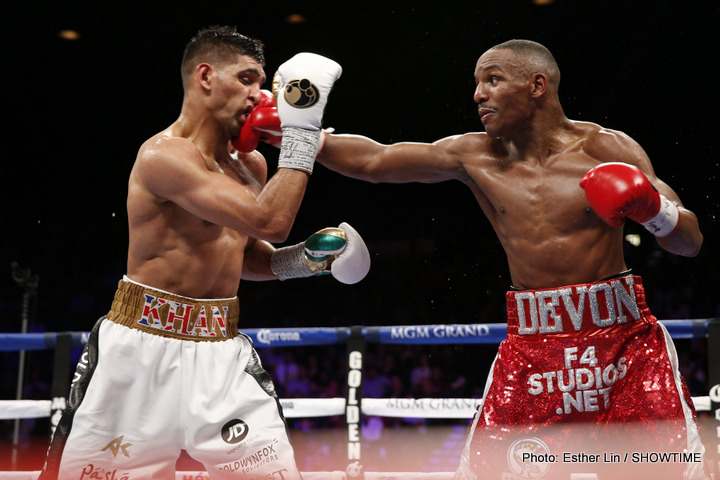 Here is what the fighters had to say in anticipation of their bouts:

“This camp has been all about getting things right. I had to make sure my mentality was right. Losing is not an option anymore. In my loss to Amir (Khan), it wasn’t anything that he necessarily did to make me lose. All the losses that I’ve had I think I could have just as easily won those fights. This is a mental game, and I wasn’t there mentally for those fights.

“I had to get rid of the distractions around camp that were keeping me from fully focusing on the task at hand and how important boxing is to me. I had to focus and then re-focus on how much this means to me. Everybody needs to reprogram themselves once in a while to help you remember what’s important.

“I know Aron Martinez is going to come to fight. He knows my record and that I’ve beaten some of the best. So he knows it’s going to be tough for him, and I’m sure he’ll bring his best into the ring with him, but it’s not going to be enough. When I’m focused like this nobody can beat me.”

“My style is to fight and hopefully he stands and exchanges with me, but if he doesn’t we have a good game plan to box him. We know he’s a boxer so I’m pretty sure that’s what we’ll see.

“I have to take care of Alexander. I want to give a good fight and then go on to bigger fights. I’m here to fight whoever they put in front of me. I’m ready to fight anybody.

“I haven’t met one single person who didn’t think I won the Robert Guerrero fight, but that’s the past. I believe I beat him, but it’s boxing and I’m ready to fight a way different type of fighter.

“It felt good to knock down Guerrero because everyone underestimates my power. I fought a lot of strong guys and they’ve felt my punches. We train to box or trade blows.”

“I’m really excited. This is my first world title defense and it’s against a tough challenge that most guys wouldn’t take. It’s not an easy win, especially with me having to come overseas.

“I’ve chosen a formidable foe and if I beat a guy like him and look good, it should raise my profile overnight.

“I don’t really study the fighters, I just like to know a little bit about their style. Montiel can do both, he doesn’t have a typical style. I like to keep it simple because you don’t want to prepare for one thing and then have your opponent come out doing something different.

“Montiel is a big puncher but I’ve been with lots of good punchers. I’ve beaten several unbeaten guys and I have loads of experience for my young age.

“I’m used to coming out here for training camps and as far as not having the home crowd advantage, I’ve won titles in hostile crowds before so it won’t be a problem.

“I think I’m there with the best in the division. I want to fight the top guys and I think if I get a big win and look good here, I’ll be in the mix.

“With these fights being on free T.V., more people get to see me and my profile will change rapidly as long as I do what I’m capable of.”

“I was very happy when I heard that we were going to fight in Arizona. There are lots of Mexicans here, so I know I’ll have a lot of people behind me on Wednesday. It’s going to be great to fight here.

“I certainly don’t feel like age has anything to do with this fight. Look at me. I’m ready to go.”