Murodjon Akhmadaliev (9-0, 7 KOs) successfully defended his IBF/WBA super bantamweight titles on Saturday night in stopping #9 WBA Ryosuke Iwasa (27-4, 17 KOs) in the fifth round of a one-sided contest on DAZN at the Humo Arena in Tashkent, Uzbekistan.

The referee called a halt to the fight at 1:30 of the fifth round after Akhmadaliev connected with a blizzard of nonstop shots to the head of the defenseless former IBF super bantamweight champion Iwasa.

It was too many punches that Iwasa was hit with consecutively for the contest to be allowed to continue.

This writer counted 11 consecutive machine-gun-like shots that Akhmadaliev landed in five seconds, and there was no way the referee could allow it to continue.

Iwasa was in trouble from the start of the fifth round, and he likely wouldn’t have made it out of the round even if the referee did allow it to continue.

The fight was stopped at 1:30 of the fifth round. Iwasa was no match for Akhmadaliev, which isn’t a shock because he’d been beaten by arguably lesser fighters like Lee Haskins.

This entire card was filled with non-competitive fights tonight, unfortunately. It’s too bad because there were a lot of talented fighters on the card, but each and every fight was a mismatch and not sporting in any way.

Giyasov, 27, stalked Moreno around the ring, hitting him with powerful shots to the head and body. It was target practice for the 2016 Olympic silver medalist, who dropped Moreno in the second round and then ended the contest in the third at 2:21 of the round.

It’s time for Giyasov to step up the level of his competition because it’s too easy for him with the way he’s mowing everyone down.

Madrimov knocked Kalombo down with a left in the eighth round. Kalombo survived the round, and made it to the final bell.

Madrimov landed a lot of shots against the painfully slow Kalombo, but he couldn’t hurt him.  The fight showed that Madrimov doesn’t have the power to hurt guys with a decent chin.

At the end of the fight, Madrimov’s face looked badly marked up with his nose bleeding, and both eyes were badly swollen.

Heavyweight prospect Bakhodir Jalolov (8-0, 8 KOs) smashed his over-matched opponent Kristaps Zutis (7-2-2, 7 KOs) in knocking him out in the second round of a scheduled six-round fight.

The 6’6″ southpaw Jalolov, who comes from Uzbekistan, knocked the 30-year-old Zutis down twice in the second round.

The referee waved it off after the second knockdown after Zutis was put down hard from a right hand from Jalolov. Jalolov dropped Zutis with a nice left hand for the first knockdown.

It was a great performance by Jalolov, a fighter that looks like he’s got star potential.

In a lightning-fast finish, Mirazizbek Mirzakhalilov (1-0, 1 KOs) looked devastating in obliterating journeyman Tasha Mjuaji (17-8-2, 5 KOs) by a first-round knockdown in his pro debut at super bantamweight.

Mirzakhalilov put Mjuaji down twice in the contest before it was stopped. The first knockdown looked like a glancing shot that caused Mjuaji to slip to the canvas.

A short time later, Mirzakhalilov flattened Mjuaji with a left hook to the head. Mjuaji stayed down from the shot and was counted out at 2:24 of round one.

Despite being the former IBF super bantamweight champion, Iwasa is the underdog in this contest, and it would be a huge upset if he were to defeat the unbeaten Akhmadaliev.

Iwasa lost his IBF title to TJ Doheny three years ago in 2018 in losing a 12 round unanimous decision. There was nothing controversial about that defeat for Iwasa. Doheny took the fight to him and proved to be too tough.

The undercard for the Akhmadalie vs. Iwasa will have these superb fighters in action:

Kalombo comes from Congo, and he still hasn’t faced the kind of opposition for boxing fans to know how good he is. With that said, Kalombo is coming off a seventh-round knockout win over the capable Daniel Lartey in December 2019

Heavyweight Bakhodir Jalovov (7-0, 7 KOs) has an easy one on paper with his six-round fight against Kristaps Zutis (7-2-1, 7 KOs). This fight likely won’t last too long, as the 6’6″ Jalovov can punch, and he’s got loads of talent.

The 2016 Olympian Giyasov is being moved quickly since turning professional in 2018.

Murodjon Akhmadaliev and Ryosuke Iwasa go at it in the main event tonight on DAZN from Taskent, Uzbekistan. IBF super-bantamweight champion Akhmadaliev (8-0, 6 KOs) looks to add former IBF 122-lb champion Iwasa (27-3, 17 KOs) to his win column at 10 am ET.

A year ago, the 2016 Olympian Akhmadaliev unseated IBF & WBA 122-lb champion, Daniel Roman, defeating him by a 12 round split decision in Miami in January 2020.

Unfortunately for Akhmadaliev, he’s not been able to fight in the last 15 months because of the pandemic, so he’s going to be looking to make up for lost time tonight against the 31-year-old Iwasa.

Boxing 247 will be giving updates of the live-action results today below. 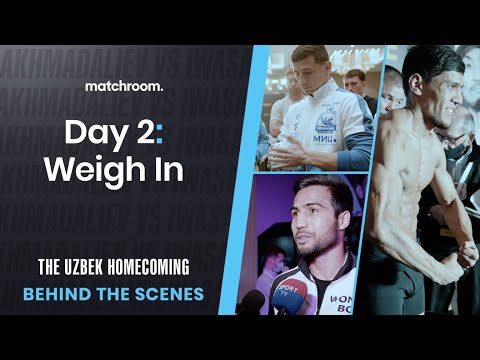