You don’t see too many Mexican heavyweights (or heavyweights of Mexican descent) and you sure don’t see ANY Mexican-American heavyweights who stand 6’9” tall. Antonio Mireles is a big, talented heavyweight who is getting plenty of attention – and not just because of his height. Last night, the 25 year old who is signed to Top Rank took out Dennys Reyes in two rounds, improving to 4-0(4) as a pro; this on the Dogboe-Gonzalez card.

The towering southpaw who was born in Iowa, has fast hands for a man of his size, and he certainly carries power. Having gone pro in October of last year, Mireles has not yet been in the ring with anyone of note, as these are obviously early days as they are for any prospect at this stage in their career. But Mireles had a good amateur career – during which he complied a 28-4 record, winning, amongst other things, the U.S Nationals and the 2020 Olympic trials – and he has been boxing since the age of 12. 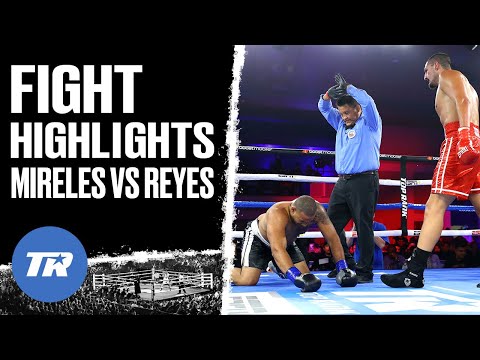 It will certainly be interesting following Mireles’ career, seeing how far he can go. The approx 270 pounder is trained by Robert Garcia (who if course recently came onboard as Anthony Joshua’s new trainer), and he is managed by David McWater. A while back, McWater spoke with RingTV.com about the heavyweight hopeful.

“There has never been a 6-foot-9 Mexican-American to win U.S Nationals and Olympic Trials,” McWater said. “Antonio is very unique in every way. We’ll be patient (in guiding his pro career). If you look at your top 40 American heavyweights, 35 of them will be over 30 and most of those guys are over 35. You’re really in a situation that no matter how good you are as a prospect in your 20s, you’re going to be five years away from your prime. Antonio has the potential to be great, but we really won’t know until we see him in the ring and we see him fight.”

Well, Mireles has now had those four pro bouts, and he has not yet gone beyond the second round. It is very early days, but Mireles absolutely one to watch. And not just because he’s big.