If heavyweight great Larry Homes was angry after being on the wrong end of a controversial decision to Michael Spinks in September of 1985, “The Easton Assassin” was downright ready to kill someone after it happened to him again in the return fight. It was 35 years ago today, when an ageing but still proud and determined Holmes faced Spinks and his “Jinx” for a second time.

No longer could Holmes break Rocky Marciano’s 49-0 record – this, he came agonizingly close to drawing level with in the first fight with Spinks, who Holmes was certain he had beaten – but the former champ could regain the crown. And Holmes wanted to hurt Spinks bad. Holmes, at age 36 and after such a long and hard career, whipped his body into great shape. Still, the advantage Spinks, the former light-heavyweight king who had made history by taking Larry’s heavyweight title, had in speed and reflexes could not be overcome. 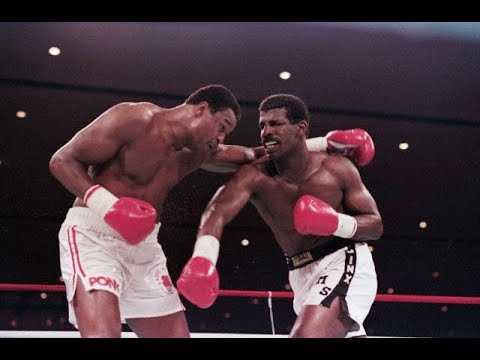 Or maybe you are one of the many fans who feel Holmes did crack the Spinks code in fight-two. Heck, maybe you feel very strongly that Holmes deserved the decision over Spinks in both fights. But in the rematch, after an angry (see fuming) Holmes came out and manhandled Spinks to the floor, it proved to be another hard and largely frustrating night for the man who had ruled the world for over seven years. This is not to say Holmes did not have his moments of success in the rematch.

Spinks was negative in the first third of the fight, allowing Holmes to build a lead on the cards. But Holmes tired, Spinks came on, and the fight proved to be a slog for the older man. Holmes did come close to getting a stoppage win late on, when he staggered Spinks with a stiff right hand. Spinks looked for a second as though he might either fall down or touch down with a hand. Holmes tried for the finish but he was running on empty.

Spinks survived and then ate another right in the 15th round, being stunned again but refusing to fall. The two embraced at the bell, which was something of a surprise. Then came the decision, a split decision that was awarded to Spinks. Having come out with his infamous, “Rocky Marciano couldn’t carry my jockstrap” insult after losing to Spinks the previous year, a bitter Holmes let loose with more nasty stuff after losing the rematch.

Showing, as Larry Merchant humorously put it, the dexterity to put both feet in his mouth, Holmes told the watching audience how “The judges, referees and promoters can kiss me where the sun don’t shine – and because we’re on HBO, that’s my big black behind.”

Holmes then retired, he felt for good. Going out at 48-2, Holmes left the sport with a bitter taste in his mouth. All these years later, and the Sugar Ray Leonard-Marvelous Marvin Hagler fight aside, it’s entirely possible the two Spinks-Holmes fights have a way of getting a fight fan angry like no other fight can. What about YOU, who do you think won these two 15 rounders?