Oscar De La Hoya, one of my favorite fighters in recent memory. That guy had the whole tool box, but also had the fearlessness to be great. I enjoyed watching Oscar over his career; he took on every tough opponent that was there to fight. Oscar had the total package, for those of us who like a display of skills, Oscar provided that. For those who like fights with the very best in the sport facing off in their known primes, Oscar also gave us that. I can’t think of a fighter he may have ducked, I can’t think of a fight where he didn’t give the fans what they wanted. In my estimation, these are traits of a fighter that anyone could be proud of. But when it comes to Oscar, I never felt the Mexican community totally embraced him, and I’ve always wondered why. Oscar De La Hoya has stolen the lime light from Floyd Mayweather and Saul Alvarez for a moment by going public with his personal demons and choosing a climatic stage of the hype to “drop his bomb”. What kind of an emergency could not wait for several days and prevented him from attending an event of such magnitude? Has he become so dysfunctional that he has to be removed from the scene as a liability to the joint venture? Was there an “intervention”?

He is the owner and founder of Golden Boy Promotions and even if he has only representative status at the company, he is hardly expendable. Even if his attendance at the Sept. 14 card is not of vital importance, his absence will be very conspicuous. The internal conflict transpires even in the press release where a public announcement calls for privacy in a vocally publicized personal dilemma. It’s always both very interesting and a great honour being a call in participant whenever a big fight is preceded by a teleconference; especially an international one ahead of a massive, massive fight such as the fast approaching Floyd Mayweather-Saul Canelo Alvarez clash. Yesterday, with big name scribes such as Dan Rafael and Lem Satterfield asking Canelo and Oscar De La Hoya questions regarding “The One,” it was hugely exciting being on the line.

I listened to the ESPN.com scribe ask his questions, along with writers for USA Today, Ring Magazine and other instantly recognisable publications, and the thing that struck me most, well actually there were two things – they were: Canelo’s amazing maturity and quiet self confidence, and Oscar De La Hoya’s bold pre-fight predictions. It looks like Oscar De La Hoya of Golden Boy Promotions is referring to WBA/WBC light middleweight champion Saul “Canelo” Alvarez as a “super hero” now following his controversial 12 round decision win over Austin Trout last month in a fight that Canelo appeared to be greatly helped by the open scoring, as well as some very, very generous scores by the three judges that worked that fight. A super hero that failed to prove that he’s better than Trout.

De La Hoya said tonight on his twitter “Who wants to see this super hero [Canelo]? And with who?”

De La Hoya was immediately bombarded with people saying that Canelo should fight WBA middleweight champion Gennady Golovkin and that he should fight someone his own size [172 lbs]. That probably wasn’t the answer that De La Hoya was hoping to get because Golovkin is a fighter that Golden Boy appears to be steering a wide path around him when it comes to matching Canelo up. 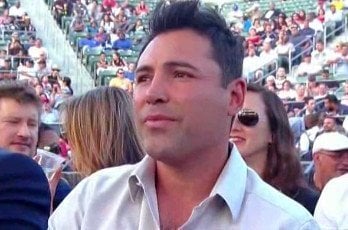