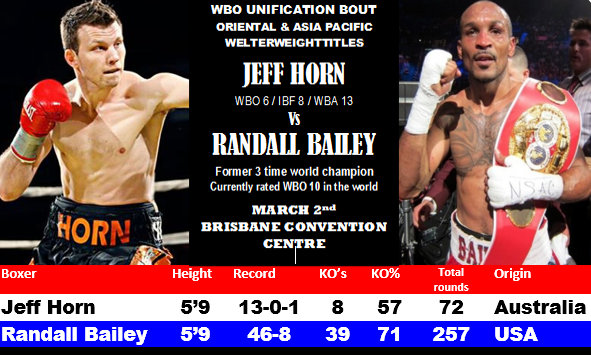 Read moreJeff Horn vs Randall Bailey in Brisbane on March 2

On June 13th at Manawatu Arena, Palmerston North, world ranked heavyweight Joseph Parker takes on Yakup Saglam in a fight that looks to have knockout written all over it. However, an equally exciting battles looms on the undercard in a match-up that is worthy of co-main event status.

Up-and-coming Australian welterweight Jeff Horn, 9 (7)-0-1 takes on the WBA 11th ranked Ghanaian Richmond Djarbeng, 19(15)-2-1 in a fight that you sense both fighters are not just coming to win, but win in impressive fashion.

For those in the know Jeff Horn has been tabbed as the most talented Australian fighter to emerge in the last decade and with a year that has so far been slowed with hand surgery the likeable yet destructive fighter is keen to make up for lost time. We caught up with Jeff to talk about his upcoming fight with Djarbeng and to also hear his thoughts on where the welterweight division is heading over the next 12 months and his role in it.

Read moreJeff Horn Interview: The Hornet plots his next move

As all of boxing once again hangs in limbo, waiting as its two biggest stars continue to indulge in their continuing dance of ‘will they or won’t they’ we look across the landscape of what has always been boxing’s deepest division, the welterweights, to see what future talent lies ahead assuming that if the Mayweather/Pacquiao match-up actually ever happens it will probably be fought with the aid of Zimmer frames and walking sticks.