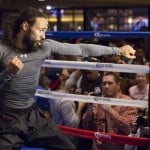 Thurman feels that Khan should at least be fighting actual welterweights without catch-weights. Thurman has made no secret to the fact that he’d be more than willing to share the ring with Khan if he would be willing to take the fight. 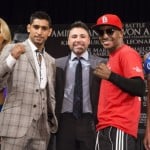 (Photo credit: Esther Lin/Showtime) Devon Alexander (26-2, 14 KOs) says he’s going to stand his ground this Saturday night in his important fight against 28-year-old Amir Khan (29-3, 19 KOs) on Showtime from the MGM Grand in Las Vegas, Nevada. Alexander wants to trade with Khan, and he’s not planning on using movement or tying him up in this fight.

That doesn’t mean that Khan is going to accommodate Alexander by standing in the pocket and going toe-to-toe with him, because Khan seems to have learned his lesson about getting into wars with his opponents. Khan learned the hard way that it doesn’t pay off for him to battle his opponents.

Khan (29-3, 19 KOs), of Bolton, England, and Alexander (26-2, 14 KOs), of St. Louis, will square off in the 12-round main event of a SHOWTIME CHAMPIONSHIP BOXING® quadrupleheader from the MGM Grand Garden Arena in Las Vegas. 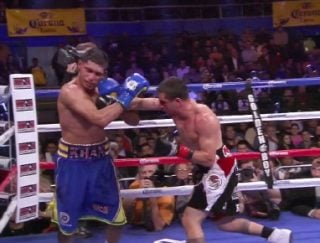 Amir Khan (29-3, 19 KOs) will be wearing some super expensive boxing trunks this Saturday night in his important fight against former two belt holder Devon Alexander (26-2, 14 KOs) at the MGM Grand in Las Vegas, Nevada. Khan’s trunks for the fight have an estimated worth of £20,000 and £30,000, according to the Dailymail.co.uk. The trunks have 24 carat gold thread in the waist band along with crocodile trim.

This is an outrageously expensive pair of trunks, and it makes you wonder if Khan is getting a little ahead of himself in wearing something as expensive as this for a fight. He’s not at the level of guys like Floyd Mayweather Jr and Manny Pacquiao, and the chances are high that he’ll never be at that level unless he’s matched carefully to put him in with guys that aren’t dangerous punchers.

Thank you so much, everybody, for calling in today. This call officially kicks off the “ROYAL BATTLE: Khan vs. Alexander” fight week activities. We have both Khan and Alexander on the call today; we will start with Devon Alexander and his trainer, Kevin Cunningham. 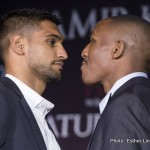 With the holiday season upon us, fighters preparing to participate in the stacked Dec. 13 event taking place at the MGM Grand Garden Arena in Las Vegas live on SHOWTIME CHAMPIONSHIP BOXING®, take a break from training to discuss their progress in camp and what they are most grateful for during this festive season.

The following answers offer some insight into the fighters’ training camp regiments.

Thanks everybody for calling in. This is really a great conference call. I’m excited that two of the fighters calling in are calling all the way from Italy. So, I think that’s something different for us and it’s exciting.