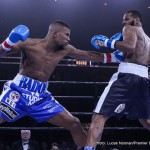 In a surprise upset, WBC super middleweight champion Anthony Dirrell (27-1-1, 22 KOs) was defeated by #8 WBC challenger Badou Jack (19-1-1, 12 KOs) by a 12 round majority decision on Friday night in a fight that wasn’t supposed to be competitive at the UIC Pavilion, in Chicago, Illinois, USA. Dirrell, 30, looked under motivated from the start as he threw single shots and spent much of the time clinching to try and shutdown Jack’s pressure style offense.

Jack didn’t have fast feet, and Dirrell likely could have out-boxed him if he was a mobile fighter like his older brother Andre Dirrell, but he simply didn’t have the mobility to stay away from Jack. All throughout the fight, Jack would cut off the ring on Dirrell and force him to fight on the inside where he was less skilled. Dirrell would then clinch to stop Jack from nailing him with shots. But Jack used these opportunities to rough Dirrell up by hitting him to the body, side of the head and even to the back of the head.

Fight week officially kicked-off Wednesday in Chicago as fighters on the Premier Boxing Champions on Spike fight card participated in the final press conference before entering the ring on Friday, April 24 at UIC Pavilion. 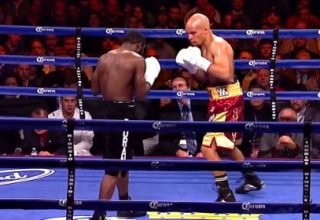 The co-feature pits Daniel “Miracle Man” Jacobs 28-1-0 (25KO) against Caleb “Golden” Truax 25-1-2 (15KO). A check of PBC’s premierboxingchampions.com website provides profiles for each of the fighters, with the exception of Caleb Truax? Undoubtedly, it was just an oversight, but Caleb merits at least a few words.

Two more competitive fights with worldwide significance will take place on the un-televised undercard of “The Homecoming”, presented by Warriors Boxing this Saturday, November 1, at UIC Pavilion in Chicago, Illinois.

PHILADELPHIA, PA (July 24, 2014)–This Friday night at the UIC Pavilion in Chicago, perennial Jr. Middleweight and Middleweight contender, Derek “Pooh” Ennis (24-4-1, 13 KO’s) will be back in action when he takes on Caleb Truax in the 10-round Middleweight co-feature that will be televised by ESPN’s Friday Night Fights.

Paired up against notorious spoiler Ossie Duran in January of this year, live worldwide on ESPN Friday Night Fights, Truax’s red-hot streak of victories came to a screeching halt, as he struggled to earn even a draw after 10 tough rounds. The night started out at the Target Center from chilly Minneapolis with a rematch from a spirited first fight featuring Milwaukee prospect Adrian Martinez fighting Duluth native Trevor Marmon.

The 1st round was evenly fought until the fighters exchanged left hooks with Adrian getting the better of it forcing Marmon to hold avoiding a knockdown.

Beginning of the 2nd round Marmon got to the body but Martinez’s uppercuts, body shots, and several huge right hands seem to bother Trevor. Martinez landed another flush left hook that closed the show with a knockout at the 1:18 mark in the 3rd round.