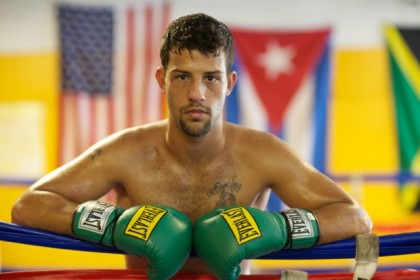 Oliveira, born in Sao Paulo, Brazil but moved to Miami, Florida when he was two weeks ago, is ranked number six by the WBC and number seven by the WBA. He looks to move up the ranking in his division, as he’s tentatively scheduled to fight, Omar “El Businessman” Chavez, (30-2-1, 22KOs), on October 12 in Las Vegas, Nevada, in an intriguing bout between two up and coming boxers. Barker from England improved his record to 26-1, 16KOs with the victory and has won three consecutive fights since his lone loss as a professional when he was stopped by current World Boxing Council Middleweight Champion and one of the pound for pound best fighters in the world, Sergio Martinez in the eleventh round.

Iraq War Veteran, Chris Traietti scored a six round knockout over Dion Stanley as the referee stopped the bout at 1:11 after Traietti landed several combinations that had Stanley down for the second time in the fight, the other knockdown was in the fifth round.

Willie “The Great” Nelson earned a hard fought ten round unanimous decision over Luciano “El Principito” Cuello in the super welterweight fight, as he controlled the majority of the bout except for the seven and tenth round.

World Boxing Association (“WBA”) and International Boxing Organization (“IBO”) middleweight champion, Gennady “GGG” Golovkin was suppose to face his most difficult opponent of his career in Matthew “Mack the Knife” Macklin, a two world challenger who fought well against world champions, Sergio Gabriel Martinez and Felix Strum; yet Golovkin had no problem in destroying him in the third round. Rising light middleweight contender, Willie “The Great” Nelson (20-1-1, 12KOs) is a born fighter who knows how to battle adversity and come back stronger. As a young child, he survived on the tough streets of East Cleveland, Ohio without any parents, who were dealing with substance abuse issues, living with one family member after another, until his older sister, Raviele took custody of him, when she was only 17 years old. Even after Raviele became Nelson`s guardian, life was still extremely difficult, as they struggle daily to make ends meet.

“I owe a great deal of my success in life to Raviele who sacrificed her life, so that she could take care of me and my younger siblings and that is why every time I step into the ring, I’m not only boxing for myself but I’m also fighting for my four children and my siblings,” said Nelson. “God only know where I would be in life if Raviele didn’t take custody of me, but I know I wouldn’t be where I’m, if it was not for her.” Vitali Klitschko and Wladimir Klitschko have dominated the heavyweight division for the last several years and since this time there has been no viable contender that has been able to dethrone them. Samuel Peter, David Haye, Odlanier Solis, Thomasz Adamek, Chris Arreola, among others, tried, however, they were all unsuccessful in their attempts to become a new world champion. The trash talking, extremely confident, undefeated Irish Heavyweight Champion and World Boxing Organization (WBO) Intercontinental Heavyweight Title Holder, Tyson Fury (20-0, 14KOs) believes he`ll be the pugilist to end the Klitschko`s reign in the heavyweight division.

“The heavyweight division, especially the Klitschko brothers are no good. They are all bums. All pins, should would have beens and I`ll knockout all of them and clean up this division once and for all,” said the 6’9” 250 pound, Fury. “We need a change in the heavyweight division and I`m going to bring that change soon.”