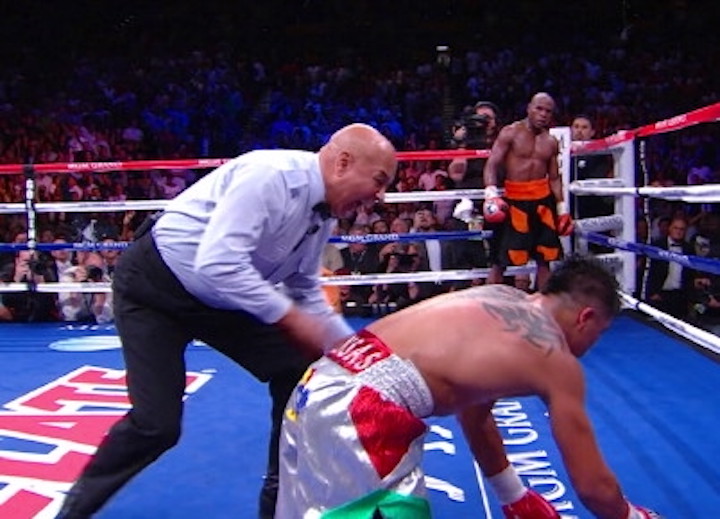 By Chip Mitchell: Fans, he did it to us again. The 24 year old enigma that we know as “Vicious” found yet another way to breakdown mentally and cause the boxing world to scratch its collective head.

“Vicious” Victor Ortiz was knocked out on Saturday night by Floyd “Money” Mayweather at 2:59 of the fourth round. It was Mayweather’s first stoppage since 2007 and it didn’t come without controversy. Say what you want, but I think controversy is good for the sport. In this one, the opinions will run about as rampant as any fight in recent memory. If you dislike Floyd Mayweather, then you probably loathe him at this point. However, let’s put personal feelings aside and look at what I feel will be the bigger issue as we move forward.

Prior to the knockout, Floyd Mayweather was enjoying a 3-0 lead on most scorecards and seemed to be winning the fourth. However, there was plenty of action in the fight as both fighters took turns coming forward. Mayweather seemed to be getting stronger and in the fourth round, he decided to press the action a bit. Victor exploded with his own answer to Mayweather’s litmus test and tried to bully Floyd into the ropes. Once there, Ortiz followed with a flurry of punches (most of which were blocked), but pressed on.

I’ve seen accidental head butts. I’ve seen head butts that were intentional. However, I’m not sure that I’ve seen a boxer use an opponent’s shoulders to launch himself headfirst to commit a head-butting foul. After the head butt, the referee stepped in as Ortiz simultaneously followed with two shots that narrowly missed. Those two shots, as well as the head butt itself could’ve been cause for disqualification. The only reason I don’t think referee Joe Cortez disqualified Victor at that point was because it was a championship fight. One question I ask is if a fighter is down 3-0, why would he purposely foul to lose an additional point? Your answer may be that Ortiz was frustrated because he couldn’t connect with any significant punches on Mayweather. Nice theory. Popular theory. However, in my opinion, it’s the wrong theory.

Victor Ortiz had a Marcos Maidana flashback. He was facing an opponent who not only was getting stronger, but (unlike Maidana) was also a defensive wizard. In other words, Victor Ortiz simply quit. Don’t believe me?

Let’s take look at Victor’s history because I think there is a bigger problem that lies ahead. In 2005, Victor was disqualified for hitting Corey Alarcon after the referee called for a break. Then in 2009, we have the infamous fight with Maidana. I think the quote back then was “I’m young, but I don’t think I deserve to be getting beat up like this…” Huh? But your opponent does, right?

Then we come to Saturday’s main event in front of a packed MGM Grand crowd of 15,000 fans. Once again, Victor Ortiz found a way out. Again, I ask why a fighter would foul when down 3 rounds to none. Frustration played a part but this fight was about a mentally strong fighter defeating a young man with a mental deficiency.

This problem is not going to go away, fans. Victor Ortiz will do this again. Alarcon, Maidana, Mayweather. Fool me once, shame on you. Fool me three times….

You can bring Eddie Futch back from the dead and he wouldn’t be able to correct the flaw that Victor has mentally. He can’t control himself. It exists in some fighters and even the fighter himself can’t stop it. Some guys spend an entire career tripping over themselves and Victor seems to be headed that way.

Andrew Golota was winning both fights with Riddick Bowe but couldn’t control himself to keep punches above the belt. Mike Tyson tried to break an opponent’s arm or bite them when things didn’t go his way. Victor Ortiz is slowly working his way into this class. It’s a shame because the kid is such a likeable young man.

Some fans will blame Mayweather for the outcome of the fight. Some will blame referee Joe Cortez. My prediction is that we will see this again from Victor at least once more. If we do, and to thy own self you are true, you’ll backtrack and realize who’s to blame. I hope Victor invests his millions wisely. He’s had a decent career so far and I hope that he makes me a liar by correcting his mental flaws. How many more “little slip ups” will he have before fans see through it? How many “little slip ups” before fans stop supporting him? I’d advise Victor to seek some help, but there is only one person who can make it right at this point. Best wishes to him.

IN THE LIGHT OF TRUTH: MAYWEATHER-ORTIZ RESULT

By Reni M. Valenzuela: Much of the boxing world is in darkness nowadays. Notably the part where Floyd Mayweather, Jr. is involved as he leaves many people “groping” again. And the recently concluded teeth-gnashing Mayweather-Ortiz comedy-drama is just another ugly attestation to the sad plight of the sport wherein the innocent fight fans have always been at the “receiving end.”

Mayweather didn’t win against Victor Orttiz and wasn’t able to grab the Welterweight belt from the champion who ripped Money Floyd in a flurry of solid punches in a couple of rounds. Mayweather was simply and foolishly declared the “legal winner” and was handed the leather symbol to wrap around his waist. But heaven can’t be fooled, for all is meaningless about the silly outcome of that fight.

Watching the replay of the bout on video, things are clear as crystal. First is that Victor Ortiz was very much in the fight up to the bizarre round four and it’s not far-fetched that Vicious Ortiz could be on his way to knocking out Money Floyd as both of his power-laden left and quick right hands were successful penetrating the head of the shoulder-rolling defensive boxer.

Second is that referee Joe Cortez was a huge blunder. He failed to give a signal understandable enough for both fighters to resume the fight during the head-butting incident in the fourth round. Note that Cortez was talking to some ring officials (which added to the confusion) when the sucker punch took place and it’s ridiculous that the “referee” didn’t even see the initial “knockout blow” coming.

It was either due to unclear or mixed signals from Cortez (unless the whole show was scripted to “sucker” the fight fans further in another drama of “rematch” in the future) . Hence it took awhile for Mayweather to unleash his “illegal” punches to the head of Ortiz. And the reason being is that Mayweather appeared to be in doubt if the fight was already “called in” and that Mayweather himself, along with Ortiz was also waiting for further words from the referee.

Though in any case, what Mayweather did in hitting Ortiz during the “break” or break violates all codes of ethics, decency, propriety and sportsmanship there is in every sports book. Hence they were lucidly malicious and intentional sucker punches of Mayweather that shocked Ortiz. But what is even more shocking and “sucking” is that certain self-blindfolded eyes argued they were not.

Call the sucker punch “legal” a million times, but I will call it only once, it was wrong.

Larry Merchant is one of the few remaining competent, credible, admirable and great figures in boxing for the past forty years. Money’s stubborn image- makers would always justify his rant and rage before a TV camera against the eighty year-old grandpa of boxing in media as merely natural reactions of the “man” to Merchant’s questioning when it was obvious and most telling that Money Floyd (with his blind defenders) may indeed be losing it.

Arum told you so. Just never mind this time that it came from Top Rank honcho.

Larry Merchant told Floyd Mayweather last night he would kick his butt if he were only 50 years younger, but today at LAX he told our camera guy … that probably wouldn’t have been the case.

Merchant described his run-in with Floyd as “kind of exhilarating in its own way” but acknowledged he probably could never have taken Floyd in a fight — no matter his age.

He described Floyd’s controversial knockout as a “legal sucker punch” but said Floyd was an “a prima donna, an outstanding fighter, … a modern reality show in progress.”

Hard to argue with any of that.