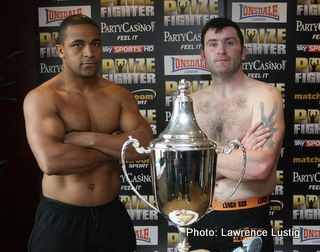 By Brendan Galbraith – Darren ‘The Raging Bull’ Corbett got the call 2 ½ weeks ago to take part in Prizefighter – The Cruiserweights II and had no hesitation accepting the challenge. Corbett is ‘over the moon to be back fighting’ and is no stranger to this competition, having been a semi-finalist in the inaugural Prizefighter – Cruiserweights.

The call for Prizefighter coincided with Corbett celebrating the birth of his daughter – Kealeigh – born on the 15th April 2010. Proud father Darren immediately vowed to dedicate his appearance in Prizefighter, and hopefully victory, to his new arrival – baby Kealeigh and his four other children, Joleen, Darren Jnr, Nicole and Jay.

“It’s brilliant to be back – I am over the moon to be back to fight in a such a competition with the former World Champion (Herbie Hide) in it..

Herbie Hide is the red-hot bookies favourite, with Skybet making him 8/11 to win the competition. Rather than being wary of this, Corbett is relishing the challenge:

“I know they are all running scared of Herbie Hide, but I’m not scared of him – you know what I mean.”

“I just had a new baby [baby girl – Kealeigh] about 11 days ago. She will fairly shift me to fight for the love of my baby; I will have a belly of fire. Herbie Hide is going to take a lot to try and shift me.”

“Honestly, I am going in it to win it. There are no doubts in my mind about Herbie Hide. I don’t care if Herbie Hide is in it.”

Darren already had four children prior to the birth of Kealeigh, explained that as he had won four belts in his professional career – one for each of his kids, and victory in Prizefighter would mean that he could secure a trophy so that all five children have a memento (belt/trophy) of his ring success as a pro.

Leading up to Prizefighter Darren is trained by his two brothers – Ryan and Eamon. “Everything has went brilliant in training, I’m injury-free and in good shape – there is not a fright in me.

And as far as tactics go – they don’t call him ‘The Raging Bull’ for nothing:

“This time there is going to be no boxing. I am just going to walk forward and fight the whole lot of them. The old Darren Corbett – The real Darren Corbett is coming back.”

So how will Corbett be winding down and relaxing on fight week?

“I will be doing a wee bit of running and training a few rounds on the pads and taking it nice and easy – not take any energy out of me – keep everything for the fight. The weight is dead on – so there is no use trying to burn yourself out now.”

Corbett is itching to get in the ring on Friday:

“I don’t know, it’s just like a death sentence – you are just waiting to go in and fight, there is a bit of a buzz. You are biting your teeth every time somebody says ‘Prizefighter’ – you are looking to fight and going’ I’m going to win this’ – it’s one of them ones”.

The last time I spoke to Corbett he had confirmed to me that he was still the Irish Cruiserweight Champion, a title that he is very proud of as it was the first professional title that he has won, and Corbett clearly outlined that if anyone wanted the title they would have to fight him for it. To his great disappointment, Corbett revealed:

“ Michael Sweeney versus Ian Tims for the Irish Cruiserweight Title and to be honest they are not the champion in my eyes and if anybody in Ireland thinks they are the champion it’s wrong.” Corbett insists he has been willing to defend the belt on numerous occasions but matches have not transpired – the latest attempt to secure a bout for his Irish Cruiserweight Title only two months ago.

To add insult to injury, no one from the Irish Board bothered to phone Corbett to tell him he was stripped of the Irish strap, Corbett found out by reading in the Irish Star, were he saw the fight poster – ‘Tims versus Sweeney for the vacant Irish Cruiserweight Title’. It is not nice when you have been stripped of something that you have fought hard for and are proud of, to be champion of your own country – you have to be proud of that.”

Corbett believes the Irish Board is “just making up their own rules and to highlight this point, said:

“Why was Jim Rock light middle, middle, super middle and light heavyweight champion and how can he hold all four of them titles at the one time? You know what I mean – so they are talking crap.” Overall, it is difficult not to sympathize with Corbett and the manner in which he found out he was stripped of the title was shambolic – to say the least.”

Prizefighter and the future

Putting that aside, Corbett has more important things to think about at the moment, his opening quarter-final fight (the third fight) is against Yorkshire man John Anthony (8-11):

“John Anthony – that’s the most important thing at the minute – John Anthony, and then if I beat John Anthony – which I should do, the next fight is Herbie Hide (if he wins) – so I will take it one fight at a time”.

Will there be a few Irish supporters at the York Hall on Friday night to cheer on The Raging Bull?

“There are a lot of people out of work going to it. I know there is about 10 or 15 going anyway, plus there is a load coming down from Scotland, as I have good Scottish friends and there is lot of my dads family that live in England and they are all going up to Bethnal Green.”

Will the previous experience in Prizefighter benefit Corbett or will he do anything differently?

“I don’t really know – because it is just like being in an amateur competition. I will be keeping myself psyched up and hyped up between fights. If you calm yourself down it is going to be harder to warm yourself back up”.

Another reason why Corbett is looking forward to facing Herbie Hide is that he would like to be another Irish man to beat a former World Heavyweight Champion, similar to Kevin McBride when he defeated Mike Tyson.

Has Corbett got a message to those who might be looking at his odds of 8/1 for him to win Prizefighter?

“It is great value. I will tell you why – I have never punched as hard in all my life and I am as fit as a fiddle. I done a run a few nights ago and I bounced over the run – I know I am fit.”

Corbett is looking forward to fighting in the York Hall and noted it was similar to the Ulster Hall in Belfast and said, “I will be the Irish Cinderella Man in the York Hall”.

Final question for Corbett, if everything goes well what would he like to do after Prizefighter?

“If everything goes well. I am going to the Irish Cruiserweight Title fight (in Limerick 15th May – Sweeney v Tims) and I am going to say ‘you are only a paper champion’ and that’s all they will be.”

“Rob Norton is the British and Commonwealth Champion and I have already beat Norton – so there would be a nice shot there. Then again, you could just turn around and retire – couldn’t you – go out in a high. I am 37 years of age and I am not getting any younger and have to look after myself. I have five beautiful kids – I will have to look after them.”

Next post: Prizefighter – Wayne Brooks: Beating Herbie Hide will be a major scalp for me; Dickinson vows to stay undefeated

Previous post: Britain’s Best Chance When It Comes To Grabbing A World Title At Cruiserweight – Herbie Hide Or Enzo Maccarinelli?