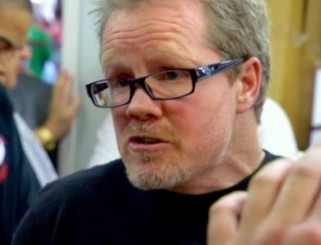 By P.H. Burbridge – Fighters fight! They spend their time thinking about fighting and they live their lives preparing for their next challenge. The technical rudiments are incredibly difficult to master and it’s a constant challenge to just maintain your technique. Time robs you of your reflexes just when your mind has finally started to make the connection between what you’ve been taught and the execution of those principals. It’s a painful reality for most fighters and one that they attempt to deny at every turn. The message trainer’s drill into your head is that time is NOT on your side and that you must get it together NOW not next month or at a later date. Tomorrow is too late. When a fighter reaches the age of 30 you can look at your watch and predict just how much longer he’ll be around. Now, this is different for everybody. No two men are the same. Some guys can extend their careers because they take care of themselves by not drinking or smoking or indulging in drug use. They get their rest and maintain an appropriate diet and exercise regimen. But, a boxer’s life also gets more complicated after the age of 30 for personal reasons. He’s an adult now and the chances are that he’s already started his family so there’s an emotional component that weighs heavily on his mind. Physically you don’t get the same results from training that you once did. Dropping pounds gets harder, getting up in the morning to run gets harder, recovering from soreness takes longer and if you’ve reached a certain level of success and financial comfort it becomes more and more difficult to leave your family to spend 6-8 weeks with a bunch of guys who are bossing you around all the time. Freddie Roach knows this all too well..

Has there been a change or at least a perceived change in Pacquiao in Freddie’s mind?

Hard to say but lately, Roach has expressed some public dissatisfaction with the way things have been handled. He was displeased about the contracted weight for the Cotto fight and more recently with Team Pacquiao’s indecisiveness in picking a training location which still has yet to be decided. Roach is a no nonsense guy and the fact that he’s making more and more public statements about how upset he is could be interpreted as a red flag. The reason Manny can’t train at the Wild Card Gym is due to an American tax law which would cost him dearly should he be in country over a certain number of days this year. He needs to do the bulk of his training some where other than the States. That’s not a big deal as Roach has many alternatives for training sites. His preference is Mexico. In a recent statement, Freddie indicated that he prefers training in the mountains of Toluca, Mexico where he has a camp set up. Julio Cesar Chavez was known to train in the mountains of Toluca from time to time. The elevation is 2,667 meters or 8,750 feet which is ideal for fighters focused on increasing their endurance. It’s a rough environment but it’s perfect for achieving the level of conditioning Roach clearly believes will be necessary for Manny to succeed against Cotto. This falls in line with my belief that Roach’s plan for the Cotto fight is to outbox him rather than the popular assumption the he will over power Miguel. I don’t see that happening and I don’t believe Roach see’s that happening either. Team Pacquiao also insisted on a 24’ ring which makes the tactical plan for this fight a no brainer. Miguel is a stout 147 pounder so don’t expect Manny to walk to him. At least not in the first half of this fight. Team Pacquiao was unsuccessful in Roach’s eyes in gaining what he wanted most and although he would never flat out say “we want to weight drain him so he’s weak on fight night” it’s pretty obvious that was his intention. If you recall Roach insisted on forcing Cotto to come down as close to 142-143 lbs as possible. He was ignored and ultimately over ruled. Bob Arum was focused on capitalizing on this deal as quickly as possible to the point that he had announced that the “deal was done” before anyone had even signed or more importantly properly reviewed anything. The most obvious faux pas was related to the WBO title. Nobody locked down that term initially and all hell broke loose when Manny realized that the title was not part of the deal. The whole thing was a bit of a mess and made the team look unfocused. Clearly Manny’s advisors were focused on the $$ and not what Freddie wanted in terms of the weight concession. Well, they got the money and it looks like they got a “title” but Freddie still didn’t get what he wanted, a weaker version of Cotto NOT the guy who hunted down Zab Judah and wore out Shane Mosley.

A 145 lb Cotto presents a major problem and that’s not lost on Roach.

The more I think about this fight the more I’m drawing a parallel between the Oscar De La Hoya-Felix Trinidad fight back in 1999. This is a shorter version of that fight and in my mind Manny will have to do what Oscar attempted to do in order to be successful. Manny must out maneuver Cotto by utilizing his speed and movement. Pacquiao needs his legs for this fight. His foot speed is the key to staying off the ropes and out of range. Miguel Cotto is an expert at cutting off the ring so this is going to be interesting. Don’t look for Manny to get into any serious exchanges with Miguel. If he does it will be against Freddie’s better judgment. Roach does not want Cotto landing any body shots especially the left hook so expect Manny to dart in and dart back out all night. This is the most dangerous fight of Manny’s career against the strongest fighter he probably will ever meet. He’s only a welterweight to fight Cotto and possibly Mayweather should he and Floyd emerge victorious in their upcoming bouts.

Aside from that Miguel Cotto is technically and fundamentally sound. He nullified Shane Mosley’s speed. He did it with angles and timing. Miguel has evolved over the years and has showed the ability to adjust in the ring to his opponents output. When he realized he couldn’t knock out Shane he started timing his shots and dictating the pace. He controlled the action with his stiff jab. That’s probably what worries Roach the most. Cotto’s jab. Cotto has already started light training for this fight which shows you just how serious he is about beating Pacquiao. Roach no doubt is displeased that Manny has so many demands on his time which for some fighters translates to a lack of focus.

Is Manny’s celebrity making it tougher and tougher to “behave like a fighter” as Teddy Atlas would say?

Between all the movies, commercials, political aspirations its definitely starting to sound like Manny Pacquiao is burning it at both ends and that’s never good for a professional fighter.

And, no one has seen that story play out more times than Freddie Roach!

(Please feel free to contact P.H. Burbridge via email at PHBboxing@yahoo.com with any comments or feedback.)