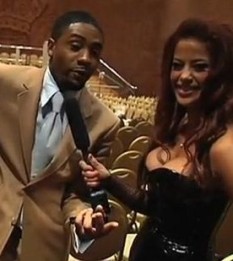 By Thomas Newman: Spencer Fearon is a man who should not need an introduction, but the former fighter, trainer and now promoter deserves one. Fearon is beginning to make big waves in the UK boxing scene and has already been formally recognised as the youngest black boxing promoter on these shores. Fearon who is the self styled “loudest mouth and most stylish dresser” in boxing took time out of is busy schedule to speak with Thomas Newman from boxingcommunity.tv :

(TN) Who is your boxing hero?

(SF) Very hard one my hero is boxing in it’s self. That wonderful body of the pugilistic art. It unifies all and transends colour and Religion. There’s a family in boxing that i’m a part of so I love my brothers in the game as they love me. Hate people who are not the family who try to muscle in as family only to get exposed for having no blood link to the game..

(TN) Who is your favourite current fighter?

(SF) Bernard Hopkins cause he is a throwback and from the old school.

(TN) Promoter you would least like to work with?

(SF) I’m just keeping it all about what i’m doing at Hard Knocks boxing promotions with my business partner and close friend Ciaran Baynes. I’ve never asked to work with anybody. I know many promoters that now wanna work with me and i’m honoured and humbled.

(TN) Fighter you would of least liked to of faced?

(SF) Richard Williams, brilliant boxer puncher with great balance and skill. Just missed out on being true world class due to illness. He was the most rounded boxer i’ve ever been around and worked with.

(TN) What was your favourite part of training?

(SF) Padwork – Man I had fast hands, so fast I should have been a pick pocket. I really miss hitting pads with the greatest padman in the game Tunde Ajayi.

(TN) What was your least favourite part of training?

(SF) Making weight and staying away from my wife and family.

(SF) I’m not commenting on other fighters – if they feel good in what they wear then thats fine. But you all do know who the best dressed Promoter in the world of boxing is? Spencer Fearon without a doubt. You know you can dress when others ask for your suits.

(TN) Favourite fight of all time?

(TN) Hardest puncher you have ever faced?

(SF) Wayne Alexander. We would spar everyday at the Lynn gym as amateurs I would handle him with no problems. Anyone that saw us spar knew who got the better, Wayne knew as well, but when we boxed in the aba’s as 19-20 year olds… boy could he hit. He hit so hard I went back to primary school lol. Me and Wayne are very good friends since 15 so all is forgiven (just).

(TN) What’s next for Spencer Fearon?

(SF) Keeping Hard Knocks real and true to the game making the people feel as part of the passion, atmosphere and the drama of my shows making the next show better than the last one that is my intention. Bringing back Choi Tseveenpurev and getting him to fight for a mayor world title, which will happen in his home of Mongolia. Got some really good kids on the come up like Nathan Graham and Junior Saeed who is so talented and at 6 foot and a super bantamweight, he can beat anyone just with the jab. To promote Kreshnik Qato in Albania as it’s a total honour to work with him and his Countrymen. If I can do that and remain humble and be a peoples person then I’m happy.

Thomas Newman would like to thank Spencer Fearon for his time and looks forward to his promotions in the future.