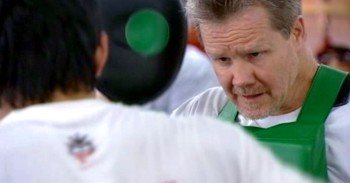 By John Wight, Scotland – The first thing that hits you when you enter Freddie Roach’s Wildcard Boxing Club is the sheer bedlam of the place – the noise of heavy bags being pummelled, speed bags rattling back and forth, the tap-tap of skipping ropes in the far corner, and in the ring the grunts and groans of men sparring to the accompaniment of their trainer’s instructions, all of which stops automatically every three minutes on the sound of the shrill beep-beeping noise of the timer as it reverberates above the general din to mark the beginning and end of each round..

Located in the heart of a Hollywood that has long since lost its sheen, above a laundry in a rundown mini-mall on the corner of Santa Monica and Vine, this is where Freddie Roach plies his trade training world champions and contenders, many of whom, like Britain’s Amir Khan, have made the pilgrimage from the other side of the world to hone and develop their craft under the tutelage of a man whose reputation is currently such that he’s assumed the status of a bona fide boxing oracle.

I first met Freddie in 1995, when he ran and trained fighters out his then Outlaws Boxing Gym on the corner of Hollywood and Highland. In those days Freddie didn’t just run the gym he also lived there, literally, in two rooms that were accessed through a door at the back. But such was the fate of a young trainer struggling to make his way after his own boxing career had ended without either fanfare or money.

Given the location of Outlaws on the corner of Hollywood Boulevard, with big glass windows allowing a good view of proceedings from the street, it was every bit as much of an attraction as the Hollywood tourist traps surrounding it, and fights with the crack heads who periodically walked in to start shouting the odds were often more competitive than the sparring that took place inside the ring.

Fourteen years on from those early days and life for Freddie Roach has changed beyond all recognition. Now, instead of crackheads invading the gym, his biggest challenge is finding the time to train the relentless stream of world champions and top contenders vying for his services.

It’s a stream that shows no sign of slowing down, one which over the past decade or so has, in no particular order, included the likes of Steve Collins, Frankie Liles, Mike Tyson, Bernard Dunne, James Toney, Bernard Hopkins, Israel Vasquez, Oscar De La Hoya, Marlon Starling, and which currently includes the previously mentioned Amir Khan and the current pound for pound best fighter in the world, Manny Pacquiao.

The energy produced by the likes of Khan and Pacquaio training under the same roof, along with a host of other champions and contenders, is palpable, and to spend just a couple of hours in the place is to understand why the Wildcard Boxing Club has become a Mecca within the sport for fighters far and wide.

But even so, Wildcard is no boxing ivory tower accessible only to the best in the world. It’s also home to an eclectic mix of ex-fighters, wannabe and well known actors, white collar professionals, and people of every demographic working out for the fun of it. The thing that draws them here is the honesty of the place; and in a town built on illusion, delusion, and the dream of fame and fortune, honesty you soon learn is a priceless commodity. Indeed, Wildcard fills a far more important role than that of a mere gym in the lives of most who train there on a regular basis. It’s a sanctuary, an escape from the pressures of playing the game, from the supplication required to make any kind of a career in the entertainment capital of the world.

As for Freddie Roach: what is it that he brings to a fighter that no other trainer of his generation does? After all, at first glance he looks far from the notion of what you might think the world’s premier boxing trainer would or should look like – more Harry Potter than Cus D’Amato. And unlike the latter, Freddie has never dedicated himself to one fighter from the very first day they put on the gloves to the last, filling the role of surrogate father, counsellor and protector as he rears his progidy with loving care. On the contrary, the long list of fighters who’ve trained under him for just one or two fights suggests a man for whom the fighter-trainer relationship starts and ends in the gym, someone who would much rather his fighters deal with any demons they might have in their own time, just as he does his.

It’s already been well documented how he’s managed to succeed as a trainer while dealing with the debilitating effects of Parkinson’s. Yet to watch him take a fighter like Manny Pacquiao on the pads is to watch a man in the full vigour of fitness and health, as if everything including his condition is left outside the ring for the duration of the workout. Like a sculptor working on a piece of clay, he focuses in on Pacquaio’s movement, his balance and handspeed, as he calls out multiple punch combinations, striving to improve the armoury of fighter whose ferocity has now been matched with a defence that Roach has painstakingly designed around it.

What is also noticeable about Roach is that he never screams at his fighters, never yells at them either in the gym during training or in the corner in the midst of a championship fight. Instead, he talks and explains things calmly and clearly, giving them the respect they deserve but with the authority of a man who possesses the uncanny ability to see that which other trainers don’t. To listen to him instruct a fighter to make the smallest of adjustments in their style, adjustments which in championship fights often make the difference between victory and defeat, is to gain a new appreciation for the role of trainer as a craft in its own right.

Yet even though now he’s as venerated and celebrated as the champions he trains, and need never live in a gym again, a more unpretentious man it would be hard to meet. And in a city where pretension is as common as bad breath in a dentist’s chair, this no mean achievement.

In the most demanding sport in the world, a sport in which the heights of fame and fortune are more than matched by the sad song of destitution and the forked tongue of those for whom fighters are no more than a disposable commodity, it seems somehow poetic that one of its legendary figures is a quiet, studious man completely shorn of pretension and self aggrandizement, practicing his trade on a run down corner in the heart of this town of broken dreams.