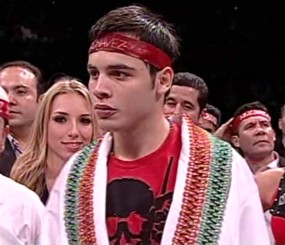 by James Slater – Last night, in Tijuana, Mexico, unbeaten 23-year-old Julio Cesar Chavez kept his undefeated record with a very exciting and tough ten-round UD over a game and determined Luciano Cuello of Argentina. Prevailing by scores of 96-95, 96-94 and a way too wide 98-92, the son of a legend improved to 39-0-1(29). 24-year-old Cuello, having only his second fight outside of Argentina, made a name for himself in losing for the first time, falling to 23-1(9).

Both men gave it everything they had last night, and as a result the action was great to watch. Chavez landed his usual hard shots to the body, his left hook going there frequently. Cuello, who bled badly from the nose in the 3rd to last round, stood and fought with Chavez on the inside for long periods and also pressed the fight by coming forward. Jabbing well in the fight, the little known Argentine really made the star attraction work hard.

By the 4th and 5th rounds a really hard, gruelling battle was raging and if not for the WBC rule that has the scores of the three judges read out after every four completed rounds of action no-one would have been too sure who was winning. As it turned out, after the first four rounds Chavez was ahead 39-37 on all three cards. The tough night’s work continued for Chavez in the last third of the fight, and in the 6th the 23-year-old picked up a cut above the right eye.

Referee Vic Drakulich went to both corners at the end of the 6th and said the cut had been caused by a punch and not a butt. By this stage of the fan-friendly fight both men were covered in Cuello’s blood, as was the ring canvas. The blood, though nasty-looking, failed to overly concern the visiting fighter. Neither guy gave an inch last night and at times (when Chavez was landing shots) the crowd roared. Not quite good enough to be an early contender for fight of the year, the 154-pound ten-rounder came damn close.

At times both men seemed tired, and who could blame them? With plenty of inside trading, plenty of guts and courage being shown and with a very live underdog giving it his absolute best, the fight was more than good value for money. Emptying themselves further in the 10th and final round, both junior-middleweights fired with both hands to head and body. It was close at the end, yet due again to the WBC’s rule, fans watching knew Chavez had almost certainly won it. After the 8th round, the announcement let fans know Chavez was up by scores of 78-74, 77-75 and a ludicrous 79-73. So, barring at least some knockdowns, or a KO, Cuello was going home with a points loss.

This is what happened, as after the last round of an excellent fight Chavez had done enough to pick up his close (on two cards) UD victory.

Cuello, though he lost last night, can certainly come again. Perhaps giving Chavez his most difficult physical test, the Argentine came very close to pulling off the win. Chavez, who showed again he has some real inner steel, will continue on with his quest to follow his father and become a world champion.