Martinez beats Cintron, but not the Ref and Two Judges 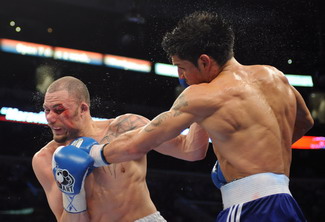 By Paul Strauss, photo by Naoki Fukuda – There was nothing sunny in Sunrise, Florida for Sergio Martinez. He clearly beat Kermit Cintron, and was robbed of a victory when the judges scored the fight a Majority Draw. He controlled the fight. He used speed and superior boxing ability to confuse and beat up Cintron. He landed a higher percentage of total punches as well as power punches. He caused much more damage than did Cintron, and could easily have been awarded a knockout in the seventh round if referee Frank Santore, Jr didn’t bungle the situation.

To be polite, Santore’s handling of the fight left much to be desired. He cost Martinez the fight (at least in the eyes of two of the judges) when he penalized Sergio a point in the 12th Round for hitting behind the head. The fact is Martinez’s punches were thrown properly, but, were landing to the back of the head because of Cintron’s defensive posture. The frog was lowering his head below his waist. In addition, the referee could have and probably should have at least warned Cintron for excessive holding..

In the seventh round, Martinez landed a powerful straight left to the chin of Cintron. It was immediately apparent Cintron was hurt. As Martinez closed in for the kill, Cintron dropped to both knees with both gloves on the canvas. At about the count of five or six, Cintron looked up at the referee and said, “It was a head butt”. The referee correctly said, “I didn’t see one.” Cintron repeated his whine.

Referee Santore appeared to reach the count of ten, so the fight should have been over. Many thought so, because the ring started to fill with people, but then referee Santore said Cintron was up at the count of nine, and the fight could continue. Before the chaos subsided and the action finally resumed, about two and one-half minutes had passed. That obviously gave Cintron a chance to recuperate.

Sergio appeared pissed and lip synced across the ring to Cintron that there was no head butt. He came out strong in the eighth wanting to finish what he had started. The southpaw wasn’t worried about moving into Cintron’s power. He was confident that he could read Cintron’s attempt to throw the right, and beat him to the punch with his speed and own left, which is exactly what he did to cause the knockdown.

Martinez fought a beautiful fight, moving in and out, and side to side. He confused Cintron with his movement and well place combinations. He had Cintron’s face cut over both eyes and bruised as well. Cintron was unable to set Sergio up for his big right hand, and he basically followed him around the ring, rather than trying to successfully cut off the ring. The fans didn’t like his lack of effort, and booed their disapproval.

Martinez was taunting Cintron with a Joe Calzaghe type move. He would drop his hands and invite a lead from Cintron. But, he did a get a bit too careless. Cintron managed to land a long looping left over Serio’s low right hand. Corner man Ronnie Shields told Cintron, “When you hurt this guy, jump on him. He also said, “Your jab is the key.” Sergio’s corner told him to work the body first and then go to the head.

In the end, Judge Tom Kaczmarek appeared to be the only one to have scored the fight correctly at 116-111. Ged O’Connor and Peter Trematerra both scored the fight a draw at 113-113, so the penalty point proved huge, and the Interim WBC title remains unclaimed. It should have gone along to Argentina with Sergio Martinez.

As for Cintron, he exhibited a lot of that same quit as he did against Antonio Margarito. Even Ronnie Shields, his trainer, told him to act like a professional. His stupid victory dance, and comment, “You know I won the fight.” directed to no one in particular (camera?), had a hollow ring to it. Max Kellerman was correct when he pronounced during the twelfth round, “Martinez won the fight.”

In the undercard, Alfredo Angulo looked impressive in scoring a TKO over late substitute Cosme Rivera. Angulo was cut in the first round, but kept pressing the action and scored well to the body. In the second round, Angulo landed a good shot to the body, and then a left to the head that wobbled Rivera, who carried his left low, and failed to exhibit any head movement

Angulo momentarily switched to southpaw in the third, but quickly switched back, and continued to land big rights over Rivera’s low left. Rivera barely made it to the bell, as he was taking a lot of unanswered shots to the head. Angulo was landing about 60 % of his punches. A couple of times, the referee appeared to want to step in and stop the fight, but then he would back off. Finally, a commission official stepped on the ring apron, and signaled to the referee that the fight should be stopped. The end came at 2.30 of the 5th round.

In the main event, Nate Campbell had a lot of trouble with Ali Funeka, but he did manage to score two knockdowns. He would set up the telling blow by first unloading hard body shots. The first knockdown came in the second round. Nate barely grazed Funeka’s temple with a long looping right, which seemed to have a delayed reaction. Then Nate landed another on the jaw, which put Funeka down. Funeka managed to make it to the bell, and Campbell came out of the round with a cut to his right eye.

In the third, Campbell continued with the hard body shots, and Funeka still seemed open for the right, but he seemed to be better aware of the punch, and would pull back enough to make the punch fall short. In the fourth, Campbell was getting out worked by Funeka. He was blocking most of Funeka’s punches, but wasn’t retaliating. Funeka continued to outwork Campbell. By the eighth, Campbell was backing up, seemingly trying to draw Funeka in so he could counter him. When that didn’t work, he resumed his pursuit, but he appeared tired.

In the eleventh, Campbell caught Funeka with another long right hand and down he went at about 2 minutes of the round. Funeka got up quickly, but appeared disoriented, but he once more weathered the storm.

In the twelfth, both fighters remained in close, with Campbell working hard to the body. It was a close fight, but Funeka seemed to win more rounds. However, the official scoring went as follows: Michael Pernick 115-111, Benoit Roussel 114-112, and Deon Dwarte 113-113. So, Nate Campbell came away with a majority decision; however, since he failed to make weight, he could not keep the titles. Can you say “Bonehead”.

Boxing News → Martinez beats Cintron, but not the Ref and Two Judges