Former cruiserweight champ and former WBA heavyweight champion David Haye today celebrates his 40th birthday. Currently working hard with Dereck Chisora ahead of “War” against Oleksandr Usyk, Haye left the rigors of the ring behind him back in May of 2018, after his second loss to Tony Bellew.

By then, Haye had suffered a quite alarming number of injuries; some of them forcing him to pull out of big fights (how would that Haye Vs. Tyson Fury fight have gone had it taken place in 2013?)

But despite the setbacks and the disappointments, Haye achieved a good deal during his career. Looking back now, was Haye good, was he great, or was he somewhere firmly in-between?

A standout amateur, Haye won silver when competing at the 2001 World Championships; losing in the final to Odlanier Solis. Haye amassed a reported amateur record of 83-13.

Going pro in December of 2002, Haye would go on to become one of the finest cruiserweights in the history of the division, Haye making his mark on the weight class in a short period of time, after a relatively small number of pro fights. 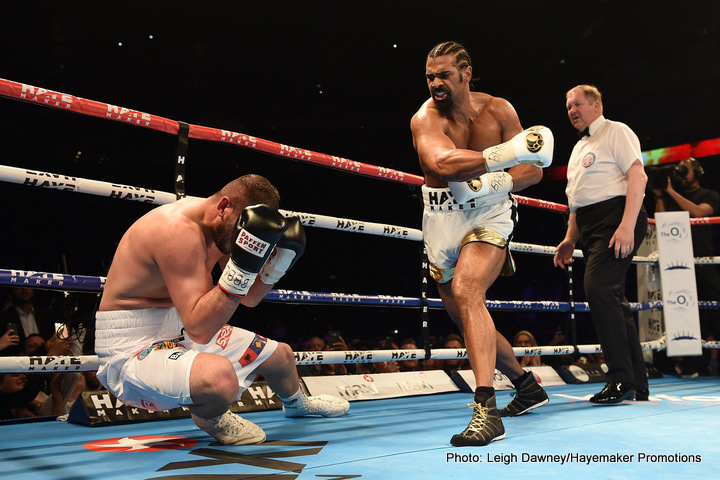 After romping to 10-0, Haye was shocked by tough veteran Carl Thompson, who stopped him in five rounds in 2004. Haye regrouped and, after just five more fights, he was European cruiserweight champ. Three retentions followed before Haye became WBA/WBC and Ring Magazine champion in 2007.

Haye’s away win over Jean-Marc Mormeck, this just the Londoner’s 21st pro bout, was possibly his career finest achievement. Haye got off the floor to stop Mormeck in France and he soon added the WBO belt to his resume, this by smashing Enzo Maccarinelli in a heavily hyped unification clash.

Then, looking to follow in the footsteps of Evander Holyfield, Haye made the full-time move to heavyweight (he had stopped Tomasz Bonin in a heavyweight fight in his fight prior to defeating Mormeck).

Haye got off the floor to stop Monte Barrett in a fun fight in 2008, before conducting a strategic masterpiece – in and out of the ring – against heavyweight giant Nikolai Valuev. Haye, who had been negotiating to fight one of the Klitschkos, pulled off a surprise by announcing the Valuev fight.

It was a masterstroke and in the fight, though it was close, Haye boxed smartly as he out-scored the much bigger but slower man. The final round saw Haye rock the tallest heavyweight champ in history, Valuev’s silly dance getting huge views on YouTube. Haye broke his hand on Valuev’s gargantuan head but he was now WBA heavyweight champ.

Still only the second man to have won world honors at both cruiserweight and heavyweight (Holyfield being the other man to have done it), Haye can look back on that big win over Valuev with great satisfaction.

Retentions came against John Ruiz (who Haye stopped and retired) and Audley Harrison, before “The Hayemaker” finally shared a ring with a Klitschko. When he did, Haye was soundly beaten by Wladimir. Worse still, Haye blamed his injured little toe for the loss, being widely ridiculed as a result.

Haye was out of action for some months, before he came back to hammer Chisora (who he of course now works with; this a development nobody could possibly have seen coming in 2012). After being set upon by Chisora after the Vitali Klitschko-Chisora fight in Germany, Haye cracked Chisora with a bottle, the chaotic scenes generating all the wrong kinds of press.

But when we look back today, Haye’s fifth round stoppage of Chisora deserves quite a bit of praise – as only two other men have managed to halt Chisora (Tyson Fury and Dillian Whyte).

Haye then took another layoff, this one seemingly permanent, Haye’s injuries finally having got the better of him. But no, Haye was not done yet, coming back as he did in 2016. Haye blasted out two handpicked foes, before he was twice upset by Bellew.

It was a bad way for Haye to exit the sport, quite ironically losing to a cruiserweight, but Haye did show incredible heart in the first fight with Bellew, when he bravely refused to let a snapped Achilles stop him from trying to fight on.

So what say you, has Haye got ANY shot at going into The Hall of Fame when the time comes? Those big wins over Mormeck, Valuev and Chisora deserve some respect, don’t they?