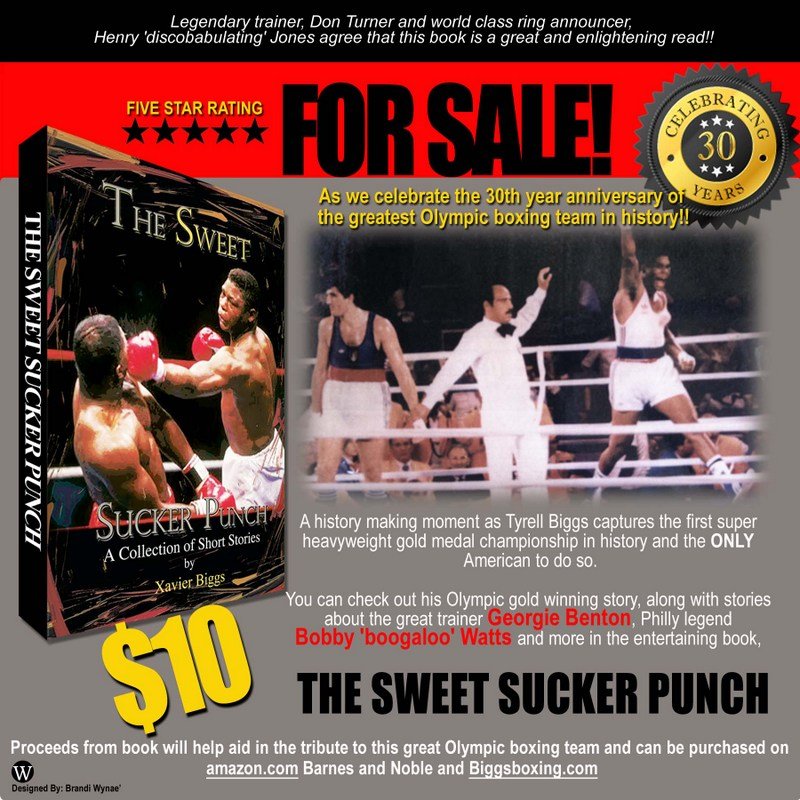 The following excerpt from my book, The Sweet Sucker Punch, is taken from one of many inspirational stories of honor and character of my experiences with some of boxing’s elite. It is my intention that you will be entertained and inspired to purchase the book for my promotional campaign in honor of the 30th anniversary of the greatest Olympic boxing team in history. Some of the proceeds will be used to help bring tribute to those legendary 1984 Olympic boxing icons.

I remember at that time I was in peak shape and scheduled to meet Rocky Lockridge for more sparring at Georgie Benton’s gym. My conditioning and confidence made me eagerly anticipate the session. When that day finally arrived, I came to the gym earlier than usual and shadowboxed and danced around the ring to the funky music that was kicking from the high-powered boom box in the corner of the gym.

After about 30 minutes Rocky came strolling in carrying his bag and shot a curious glance at me as he made his way toward the locker room to change. I enthusiastically shouted at him “What’s up Rock!” He just nodded his head, waved and went about his business.

Now I went into top gear shooting fast combinations in the air. You would’ve thought I was the champion and “Rocky Lockridge” was my sparring partner. After a while Rocky came back and sat down so Georgie could wrap his hands.

All this time he was watching me with a curious look on his face. I had endless energy so I showed off my footwork and my quick combination improvisations. Man, I was really tripping. Eventually Georgie finished the hand wrapping and Rocky got up to shadowbox and warm up. Georgie stood up and looked over at me and grunted with his raspy voice, “You got 5 in you today, baby cakes?” I answered back “Yeah man, maybe six.” All the time Rocky was just nonchalantly shadowboxing. Yep, I was in the process of making a real stupid mistake from which I would learn a powerful lesson to take with me for the rest of my boxing career.

When we started gearing up for sparring I was so jumpy Georgie had to scold me to “be still” so he could tie my gloves. Rocky just kept giving me that curious look. Rocky Lockridge was a junior lightweight champion that fought most of the best in his division and sported more than 300 amateur fights before he turned pro, winning most of them. (His final pro record was 44-9.) Rocky was with the stars of the Lou Duva stable of tomorrow’s champions, consisting of top ranked middleweight “Alex Ramos,” Johnny ‘Bump City’ Bumphus and more.

I was just a local pro-club fighter with only a few fights under my belt, and I was acting like a superstar. The first round went pretty smooth as Rocky and I sharp shot each other as we were feeling each other out. I was feeling so good I came out the second round with a blazing combination, then did a Jersey-Joe cake walk and grabbed the rope, dropped my other hand and slipped Rocky a right-hand “Gypsy Joe” style. I shook my shoulders and danced back to the middle of the ring.

Georgie just watched silently. Maybe he was a little entertained by my ring antics, or what the old timers used to call “getting cute,” but I didn’t think Rocky was too entertained when I saw that familiar curious look in his eye right before he delivered a menacing straight right hand cork screw punch to my ribs. Now the show was over as I dropped to my knees from the pain. Rocky suddenly rushed to my aid in concern and asked “Yo man, you alright?” I said, “I’m cool man. I’m cool.” But I really wasn’t. I was embarrassed and humiliated, and I thought my ribs were broken. I finished the next three rounds like a deer in the headlights. At least Rocky was merciful enough not to throw any more right hands at my ribs.

After the sparring session I moseyed over to the other side of the gym nursing my aching ribs. I sat there and admired the way Rocky shadowboxed to the R&B rhythms kicking out of the boom box. He always shadowboxed with his gloves on after sparring sessions. As I sat there cringing from the pain of my ribs it suddenly dawned on me that all these sparring sessions with Rocky had gone to my head. Rocky had been holding back all those times, and this day when I decided to ‘get cute’ he brought me back down to earth and let me know who the real champ was. It only took that look in his eye and that one punch to my ribs to give me two weeks of excruciating pain and a rude awakening to the true honor of a champion.

The more I thought about it, I admired and respected Rocky Lockridge even more. In all our sessions Rocky just toyed with me and pulled his punches for the purpose of sharpening his arsenal of tools for the real battle, and at the same time salvaging my ego, dignity and health. He was capable of destroying me within two rounds and that corkscrew right hand to my ribs was an eye opening message that said, “I’ll allow you to sharp-shoot with me so I can polish my skills and you can continue to learn, but don’t ever forget who the real champ is and always show the proper respect because I paid some serious dues to get it.” Rocky Lockridge was another great champion trained by master trainer Georgie Benton. Rocky can also be remembered by his 12 and 15 round epic battles with the great champion from Panama, ‘Eusebio Pendrosa’ and the great Mexican champion, ‘Julio Cesar Chavez.’