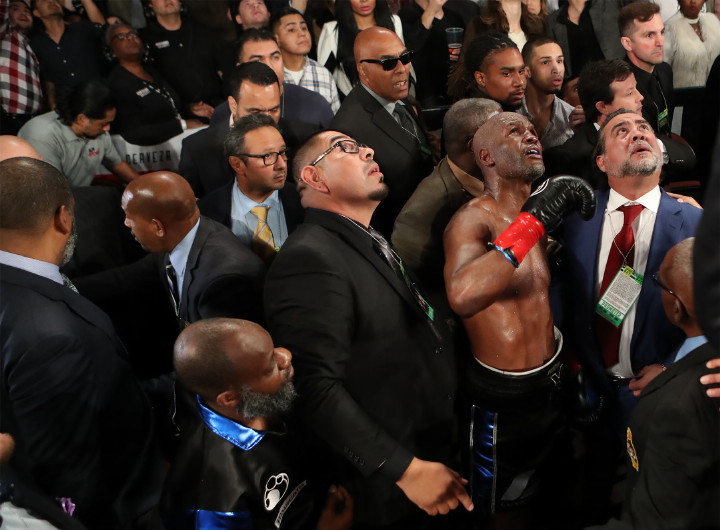 Joe Smith, Jr., landed five left and right hooks in the eighth round and then connected on a devastating left hook that knocked Bernard “The Executioner” Hopkins out of the ring and caused him to land hard on his head and twist his right ankle. Hopkins was unable to get back into the ring before the twenty second count expired, which gave Smith, Jr. the unexpected technical knockout victory with 53 seconds left in the round. This was the last bout of Hopkins’ outstanding Hall of Fame career that began 28 years ago in 1988.

This fight took place at the Forum in Inglewood, California. It was broadcasted on HBO Champion Boxing.

Smith, Jr. aggressively stalked Hopkins along the ropes in the first round and landed several hard shots, including a right hook that buckled Hopkins’ knees. Smith, Jr. out worked and out landed Hopkins in the second. Later in the round, he received a large cut on his right eyebrow courtesy of an accidental head butt from Hopkins, although it appeared that Hopkins intentionally caused the clash of heads. Smith, Jr.’s cutman did an excellent job at tending to this cut and prevented it from causing him any more problems in the fight.

He controlled the third round, but Hopkins came back strong in the fourth and fifth as he consistently landed left hooks and right jabs that took Smith, Jr. out of his offensive rhythm. There was great back and forth action in a close, competitive sixth. It appeared that Hopkins had recovered from his usual slow start and was beginning to turn this fight around in his favor, when Smith, Jr. regained momentum in the seventh, as he connected on numerous powerful punches that caused Hopkins to cover up a lot and prevented him from effectively counter punching Smith, Jr. Smith, Jr. dominated the eighth round and was on his way to winning the round before he ended the bout with the knockout.

Smith, Jr. improved to 23-1, 19 KOs and successfully defended his WBC International light heavyweight title for the first time, which he obtained in a stunning first round knockout upset over heavily favored Andrzej Fonfara, in his previous bout in June. Smith, Jr. has won seventeen in a row and is ranked second by the WBC, fifth by the WBA, and twelfth by the WBO. Hopkins dropped to 55-8-2, 1 NC, 32 KOs and suffered his second consecutive loss.

Hopkins reiterated after the fight that despite the loss, this was indeed his final bout of his career, and what an incredible career it was. Hopkins set a middleweight record twenty consecutive IBF title defenses from 1994 to 2005, became the first boxer in any division in the four-belt era to simultaneously hold all of them at the same time in 2004, and won seven world titles. After two consecutive close losses to Jermain Taylor, he moved up two weight classes to the light heavyweight division and won three additional world championships. Hopkins became the oldest fighter to ever win a world title at the age of 46 when he defeated Jean Pascal, a record that George Foreman set in 1994 at the age of 45. Hopkins then broke that record when he won another world title at 48 as he beat Tavoris Cloud. He also set the record of becoming the oldest fighter to successfully defend his title at 49 against Beibut Shumenov. Hopkins is considered one of the top five middleweight fighters of all-time and one of the best boxers this sport has had the privilege of seeing within the last twenty years.

The 25-month layoff for Hopkins, which was one of his longest inactive stretches of his career and turning 52 next month played a significant role in him losing this fight. Nevertheless, this should not take away from Smith, Jr.’s performance. He did something that no one else has ever been able to do to Hopkins, and that was to knock him out. He dominated the majority of the rounds and made Hopkins fight much more defensively than he usually does and hit him more than he is use to getting hit. Smith, Jr.’s victory will help him obtain a significant fight next year, for a world title bout, a bout against local undefeated rival Sean Monaghan, or another top ten light heavyweight boxer.