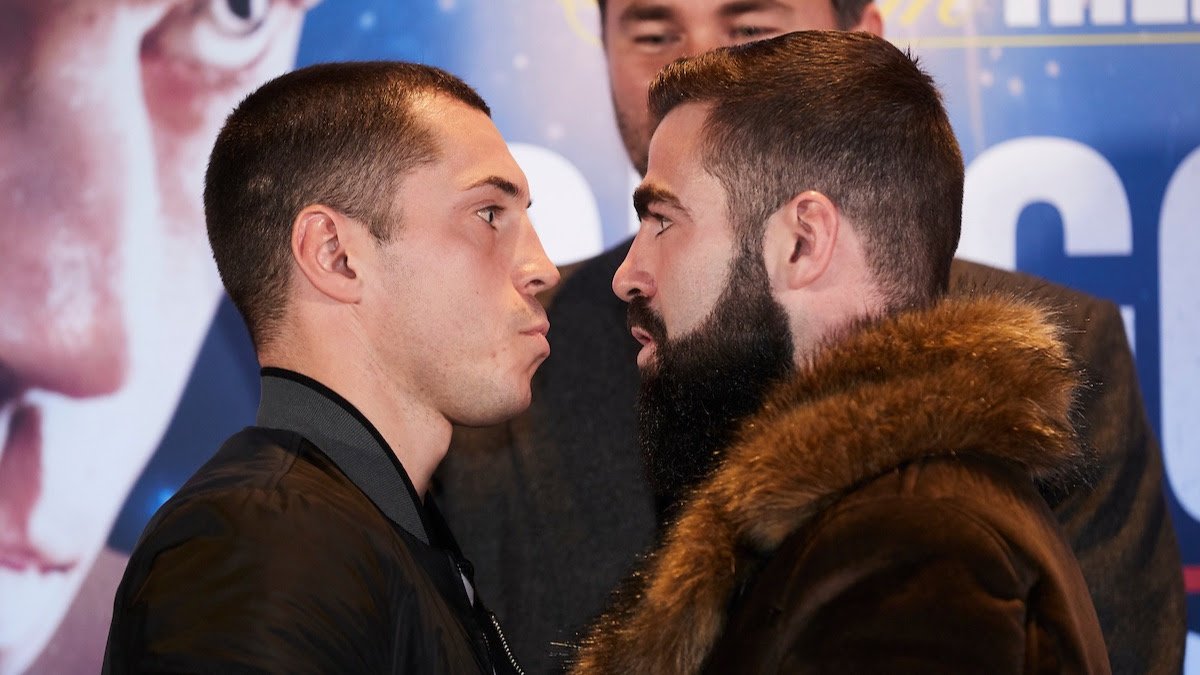 “Good afternoon everyone. Welcome. I think this is the first one of 2020. 2019 seems to have passed us by and a great great year of boxing in Britain, in America, of course finishing with that wonderful event in Saudi Arabia where Anthony Joshua reclaimed the unified World Heavyweight Championship, one in Dallas for Jacobs vs. Chavez Jr.

Next week we kick everything off, live on Sky Sports and live on DAZN, in Miami with a huge card, Super Bowl week in Miami with Demetrius Andrade vs. Luke Keeler, Tevin Farmer against Jo Jo Diaz, Daniel Roman against Murodjon Akhmadaliev, Jake Paul against AnEsonGib – Adam’s particular favourite – we can’t wait to be in Miami next week ahead of the start for the UK.

“Kell Brook returns to the ring on February 8th at Sheffield Arena against Mark DeLuca, but Manchester, we’re back here on March 7th with a great great great fight. So many great memories in this very room here, I see Anthony Crolla up the back, and of course I remember the great build-up to the fight between Scott Quigg and Carl Frampton at Manchester Arena – so many great press conferences in this room here – that was a feisty feisty build-up.

“We’re going to get exactly the same thing in this build-up between two great fighters in very similar positions. Both guys who have been a World Champion in Scott Quigg, a World Title challenger in Jono Carroll – a great fight against Tevin Farmer in Philadelphia. Of course Scott Quigg, former Super-Bantamweight World Champion attempted to unify that in one of the biggest fights that Manchester has seen in the Carl Frampton fight. This is an absolute must-win fight for both guys.

“I was gutted when we lost this fight in Saudi Arabia, and when we put it to them for March 7 Scott accepted and of course Jono jumped at it straight away. This is a must-win for both guys, high stakes. There’s a big card coming for March 7, some of those guys are here today and some of them are in camp already abroad.

We have the return of Hughie Fury, good to see him back, disappointed in Monte-Carlo when he fell ill during fight week, but he’s returning to the venue where he fought for the Heavyweight World Title against Joseph Parker.

“Scott Fitzgerald will be on the card as well, and also, late last night we awaited final confirmation that Zach Parker will be on this card fighting in an eliminator for the No.1 spot for the Super-Middleweight World Title, a very important fight to become mandatory challenger to Billy Joe Saunders, against Rohan Merdoch the Australian on this card as well.

“Ibrahim Nadim, a great young fighter, with Paul Speak and Ricky Hatton coming through. Jack Cullen returns on this card – what a fight with Felix Cash! It was probably one of my favourite fights of 2019. Dalton Smith as well, one of the top top GB talents coming through who had a wonderful start to his career last year.”

“Thanks Eddie. It’s fantastic to be back in Manchester and I think this is the fight for Manchester. Like you I was gutted that it was called off in Saudi, which was an amazing night for Anthony Joshua and for the whole of British boxing. It gives us such a huge amount to look forward to in 2020, there’s some really fantastic shows coming up.

“Kell Brook in Sheffield. We’ve got a load of stuff coming from the States, obviously we’ve seen the likes of Dillian Whyte coming back and Derek Chisora, Anthony Joshua brought his titles back. There’s so much to look forward to ahead.

“Also, the women’s scene is one fire, I was talking to Peter Fury earlier and Savannah Marshall will be going great guns this year, Katie Taylor we’ll see maybe Stateside but it would be great to have her here too, it was fantastic in Manchester last time when she become a two-weight World Champion.

“There’s some super stuff going on out there and we’re really please to be back, first of all in Manchester, I walked in with Anthony Crolla – he still loves it doesn’t he! He was working with us a little bit towards the end of last year doing a fantastic job on the safe side of the ropes.

“We loved watching him throughout his career. We followed Scott Quigg throughout his, he’s been a brilliant fighter, he’s always been so down to Earth, so easy to deal with and so wonderful in the ring. He’s had a fantastic career already, becoming a World Champion, Eddie mentioned that huge fight with Carl Frampton. He goes on, his dedication is incredible and I love that in Scott.

“I also love this guy, Jono Carroll, he’s brilliant. This fella has been in some fantastic fights. It was a terrific effort, we were there ringside when he pushed Tevin Farmer the whole way. He’s a colourful character, he’s fantastic. It’s a brilliant fight to make for the Manchester fight crowd – you guys know your stuff up here. The likes of Ricky Hatton, Anthony Farnell, Michael Gomez, Anthony Crolla through the years.

“Scott Quigg has got some life left in him the old dog, he looks fantastic doesn’t he – he always does. Jono Carroll will be pushing him all the way. It’s a tremendous bill with some terrific fighters on card. Jack Cullen – what a great fight that was with Felix Cash.

“It’s great to see Hughie Fury back and so many great youngsters coming through. I think it’s going to be a brilliant 2020 and we cannot wait to be here back in Manchester where they love their boxing, and you’re going to love this show. It’s a fantastic top of the bill Eddie.”

“It’s good to be back in Manchester in an exciting fight. I have been out the ring a long time and it has been frustrating but now I am back with Joe and really looking forward to March 7.

“This is a fight that really excites me, he is going to come and try and have a go but he will get demolished. 2020 is going to be a very successful year for me.

“I want to get in the ring and if he wants to have it then great but I think he will be on his bike! We will see if he backs up everything he is saying.

“I know that I’ve still got it and can still do it. And I am improving and on March 7 all the doubters will see that there is still plenty left in the tank. I will take Johno Carroll out, get my arm raised and move on. It’s a simple as that.”

“First of all I want to thank Eddie and and Adam for having me on such a big show and I’m finally topping a bill again.

“After Saudi got cancelled I genuinely thought that Scott bottled it, I had no issues with him but I just remember thinking he better not have bottled that.

“This is a career shift, I have always wanted to top bills and I remember being at Manchester Arena when Scott fought Kiko Martinez thinking I cannot wait until that is me and now I’m here.

“I am delighted to be here and if you know me personally you will know this is just business. And I was more than happy to go out to Philadelphia and help Tevin Farmer after our fight and I am actually have disappointed that I won’t be there.

Carroll will be training hard for Quigg fight

“I will be working my ass off in Spain to go and smash Scott Quigg up. And I want to gain as much experience as possible in this game and I welcome failure. I like it when I fail because it means I am pushing myself hard enough.

“My loss to Farmer woke me up and I want to be the best I can possibly be. Anything that will push me mentally and physically I am up for. It keeps me focused, disciplined and gives me guidance. This is going to be a fantastic fight. I am already fit so this is just about fine-tuning now. I know that I am that world level now. And I go to war, I think it is the Irish blood in me.

“I was absolutely devastated not to be able to box in Monte-Caro after all of that hard work. It wasn’t meant to be, but it has given me that bit longer with the stuff I’ve been working on in the gym. It’s exciting to be back in Manchester where I fought for the World Title, it wasn’t my night, but it’s all about learning and all of these fights put me where I am today, they’ve made me a better fighter, and people are in for a shock the next time around. It’s going to be an exciting year.

“People are going to see a major turn around. I want all of those fights again. I was basically fighting with one hand and they still couldn’t do no good with me. They’re the fights I want again. It was frustrating for myself to not let that right hand go against Povetkin. I kick myself all the time about it but it’s one of them, it happens and people are going to see a big difference next time.”

“Yeah the Cash fight was a good experience. I’d just like to say thanks for getting me back out on these shows. 2020 is going to be my year. I’m not going to come up with any excuses for Felix Cash, it’s time to get back wining and hopefully we’ll get it again. I’m not looking past anybody, I’m looking forward to my next fight, I’ve just got to keep on going and keep on winning. To be honest I wasn’t myself, I’m not going to come up with any excuses, I wasn’t myself, if it happens again I will be wining that fight. Hopefully before the end of the year we’ll get it again.”

“I enjoyed last year stepping into the professional ranks. And I had four fights, settled in well, but the new year is here now and it’s time to step up the rounds and the opposition. I just want to stay active this year, stepping up the rounds and we’ll see how the year pans out. If it were up to me I’d jump into those big fights now but you’ve got to be realistic, it’s a tough game to be in and you’ve got to learn your trade.

“Sometimes it’s not just about your ability, you’ve got to become a 12 round fighter and get the experience. I just listen to my team. I just do what they say. Obviously I’ve got the best promotional team around me, one day I want to become a World Champion but I just need to listen to my team, I’ll fight whoever they put in front of me.”

“First of all I’d like to thank Eddie, Matchroom and Sky Sports Boxing for giving me this opportunity to fight on the undercard of a great main event. I’ll show you all what I’m about on March 7. I’m still getting used to the transition into the pro game, I need to learn to plant my feet a bit more and let some more power shots go.”