This year marks the 40th anniversary of the movie ‘Rocky III.’ Sylvester Stallone’s saga of the downtrodden “ham ‘n’ egger” of a fighter who makes good, found a younger audience with the third installment, and the kids loved the film.

The enjoyment factor was not on anything like as high a level when it came to the serious (too serious) critics, but so what if these people didn’t have the spirit to get into the groove.

If Stallone “rolled the dice” by making ‘Rocky II’ (this in the opinion of a number of prominent movie critics of the day; who confessed the sequel was worthy of said dice being rolled), then he went too far with ‘Rocky III.’

A guilty pleasure of a watch for many film folk, the story of the now affluent ‘Rocky Balboa’ being brutally beaten by ‘Clubber Lang,’ – surely the most enjoyable bad guy ever in a boxing flick – reaches heights of silliness, sure (see ‘Rocky’s’ fight with gargantuan wrestler ‘Thunderlips’), yet the sheer electricity the two fights ‘Rocky’ has with ‘Clubber’ more than make the film worth seeing. Mr T is just perfect in the movie, his angry, hungry performance of an angry and hungry fighter is still marvelous to watch four decades on.

Sly is as lovable as ever as the star, while the supporting cast turn in honest work (even the most cynical viewer has to admit how the death scene of ‘Rocky’s’ beloved trainer, ‘Mickey,’ as portrayed by the great Burgess Meredith, is genuinely moving). The real star of the movie, though, aside from T, might be the montage scenes. With the rocking soundtrack blasting out during the training scenes – that one on the beach, with ‘Rocky’ and former foe turned trainer ‘Apollo Creed’ being especially memorable, for different reasons – ‘Rocky III’ becomes a movie impossible to ignore, or to be bored by. 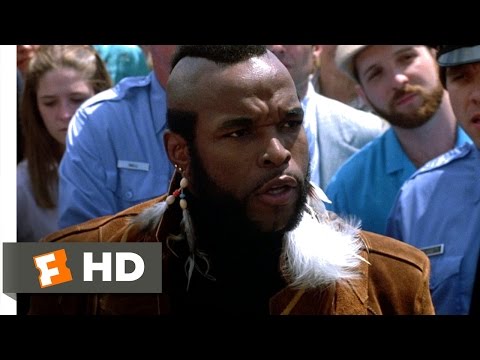 The smashing revenge fight climax, that sees a born again ‘Rocky,’ now slicker than he’d even been or ever had a right to be, got the fans pumping their fists back in 1982, and it still does the job today. The critics love to gush over “more important” boxing films such as ‘Raging Bull,’ and ‘Fat City,’ yet Stallone and co, when making their third film, made just as much effort as De Niro and co and Keach and co made when they produced their two, more highbrow films.

In short, ‘Rocky III’ is a great ride, a fantastic, high-octane, feel-good 90-minute trip. There was far more over-the-topness to come in ‘Rocky IV,’ but in 1982, Stallone was still able to reel it in just enough. And the blend of drama, action, montage sequences and silliness, made, and still makes, a great boxing movie.