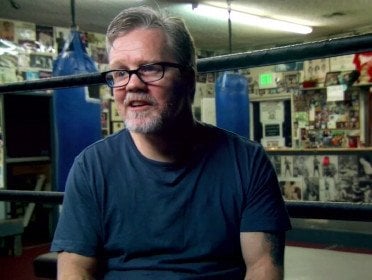 Trainer Freddie Roach recognizes that the bigger and taller Chris Algieri (20-0, 8 KOs) has an excellent jab that will give WBO welterweight champion Manny Pacquiao (56-5-2, 38 KOs) problems when they face each other on November 22nd in Macao, China. However, Roach feels confident that Pacquiao will be able to get past Algieri’s jab in order for him to land his blistering fast combinations.

“Algieri has a good reach advantage and we’re going to have to get past that and his jab. That will be our biggest problem. We have ways to do that,” Roach said.

Ruslan Provodnikov, another Roach-trained fighter, was unable to get past Algieri’s jab last June after knocking him down twice in the 1st round. Algieri got his jab working after the 1st round and ended up out-boxing Provodnikov and making him look limited.

Roach doesn’t agree that Provodnikov was beaten in that fight. In fact, Roach still stubbornly believes that Algieri didn’t do enough for him to deserve the win over Provodnikov despite the fact that the judges agreed that Algieri had done more than enough to get the win.

“It surprised me because I actually think Ruslan won that fight. (Algieri) got beat up a little bit,” Roach said.

Algieri suffered an eye injury in the 1st round when he was hit by a left hook from Provodnikov. But other than that one round where Provodnikov landed some good shots, Algieri wasn’t hit that much in the remaining rounds of the fight.

I don’t know that Pacquiao is going to be able to land his jabs against Algieri in this fight unless Algieri stops and lets Pacquiao have a stationary target. Pacquiao has mostly been matched up against guys that either stand in front of him or come straight at him.

The only guy that used movement against Pacquiao was Tim Bradley in their first fight in 2012, and he was able to negate Pacquiao’s offense completely. Pacquiao didn’t have the leg speed or the talent needed to cut off the ring on Bradley. I expect that we’re going to see the same thing on November 22nd with Pacquiao unable to cut off the ring on Algieri, and unable to keep from getting hit with his jabs.