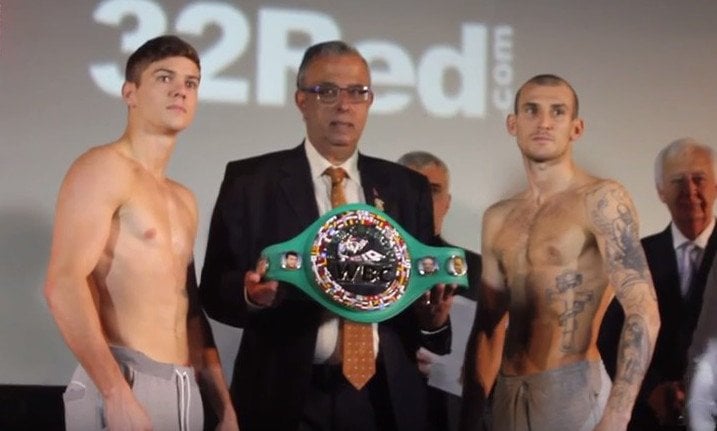 The 29-year-old WBC Silver lightweight champion Luke Campbell (15-1, 12 KOs) beat former world title challenger Derry Mathews (38-11-2, 20 KOs) by a 4th round knockout on Saturday night in front of a large pro-Mathews crowd at the Echo Arena in Liverpool, England. Mathews tried his best but he was knocked down three times in the before the bout was stopped in the 4th. One knockdown came in the 3rd and the other two came from body shots in the 4th.

Mathews, 33, was thought to be a tough test for Campbell going into tonight’s fight, but it turned out to be a bad mismatch unfortunately for the boxing fans that came to see the fight thinking it would be competitive. Mathews couldn’t handle the body shots from Campbell. Once Campbell realized in the 4th round that Mathews couldn’t take it downstairs, he could nailing him to the body in producing two knockdowns in the round before the fight was finally halted. A good fight this was not.

For Campbell, a 2012 Olympic gold medalist for Great Britain, it keeps him on the course for an eventual title shot in the future. Campbell already had his big plans for a world title sidetracked when his promoter Eddie Hearn matched him a little too tough in putting him in with Yvan Mendy last year. Campbell was soundly beaten by the fighter. Since then, Hearn has been more careful Campbell in putting him only against guys that he matches up well against in feeding him Gary Sykes, Argenis Mendez and Mathews in consecutive fights. Don’t hold your breath waiting for Hearn to put Campbell back in with Mendy, because that’s not going to happen. Hearn will be protective of Campbell until he gets his title shot, and it’ll be on him to see if he has what it takes to win a title.

Mathews suffered a cut on his nose in round two. He wasn’t jabbing, and he was loading up too much. Campbell did a good job of tying Mathews up when he would get close and putting him in head-locks.

The first knockdown of the fight came in round three when Mathews bumped into Campbell and fell on the canvas. The referee mistakenly ruled it a knockdown. The two knockdowns in the 4th were legit though.

Campbell said this to skysports.com about the fight about his win over Mathews:

“I’m very happy; I knew this would be my toughest test. He’s a warrior – I don’t know how he got up from the first shot. I was praying he wouldn’t. I look for every shot, whatever lands. Derry is a big, strong lightweight with a lot of experience – he’s been in the trenches. My game-plan was to out-box him for a points win. could really feel what was in his gloves.”

The reason why Mathews got up from the first knockdown of the fight was because it wasn’t a knockdown. It was a bump and a blown call by the referee, who failed to see what was right in front of his own eyes.