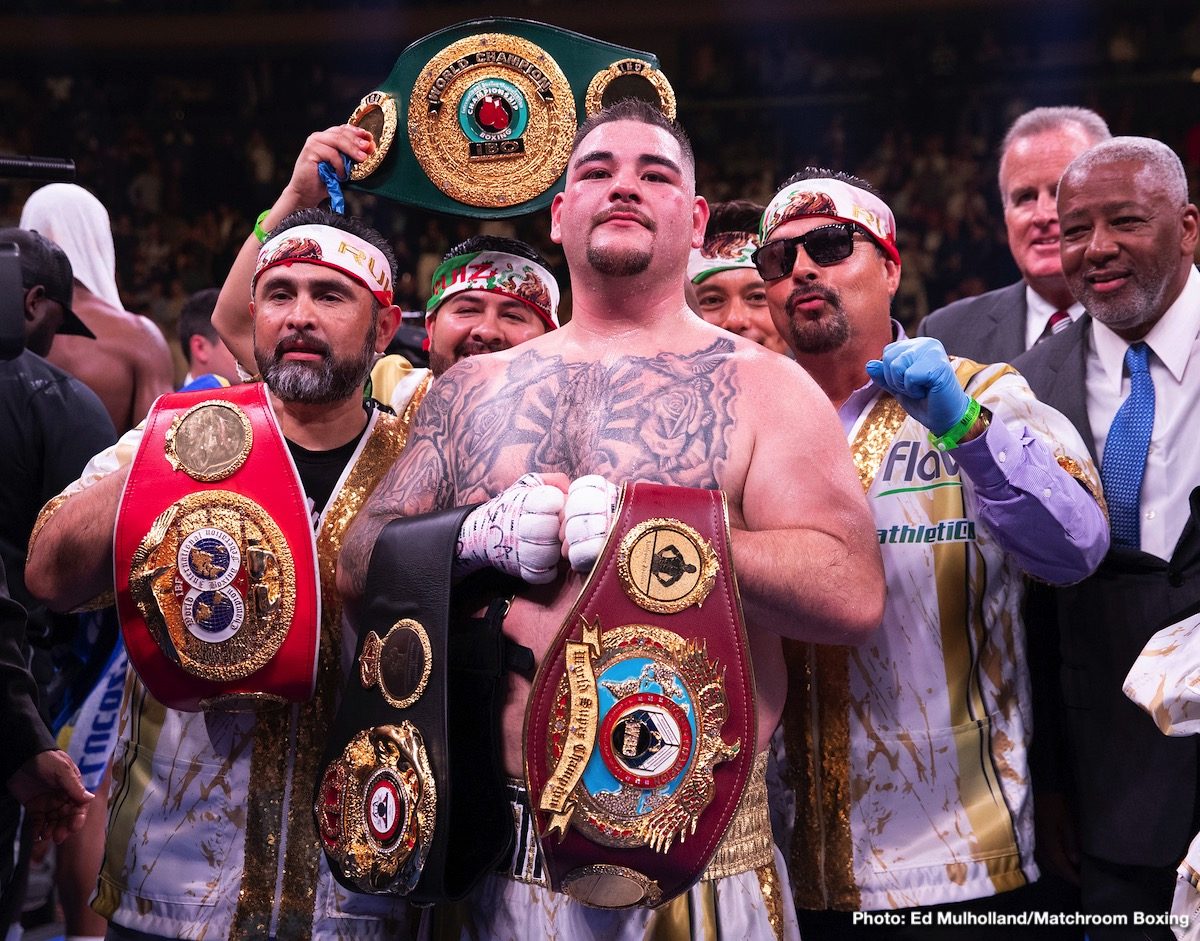 Andy Ruiz’s Jr’s shocking 7th round upset over previously undefeated Anthony Joshua for the unified WBA/IBF and WBO heavyweight straps tonight was a timeless reminder that boxing fans need every once in a while:

There are no guarantees in heavyweight boxing.

While I can’t say I had put much stock in Ruiz’s chances as a late substitute to disrupt the championship stalemate between Joshua, Tyson Fury, and Deontay Wilder, I did feel that despite his physical shortcoming, Ruiz’s skills and power entitled him more respect than his role as a mere steppingstone as highlighted by position as a 30-1 underdog. His lone loss in his first title attempt against Joseph Parker (who would later lose the WBO belt against Joshua), however, seemed to have convinced many boxing fans that his blemished record made his defeat a forgone conclusion when he signed the contract.

However, Ruiz either hadn’t read or had no plans of following the script tonight.

Ruiz showed a poise and demeanor that surprised the commentators considering the magnitude of this Madison Square Garden title affair. If anything, he fought in a manner that we boxing fans often dare not expect in this landscape of safety first and protection of records: an exciting contest where a clear aggressor dares pursue a KO.

Ruiz dared to execute this game-plan and obtained victory in dramatic fashion.

The first two rounds were uninspiring with minimal contact between the two fighters, but numbers leaning towards the former unified champ as made use of his advantages in height and reach. Joshua (22-1, 21 KO) started set up a beautiful left hook in the third, dropping Ruiz for the first time in his professional career. However, undeterred, Ruiz rose to his feet, and traded with Joshua who was seeking an emphatic finish akin to that showcased by WBC champion Deontay Wilder 2 weeks ago in the neighboring borough of Brooklyn a mere 2 weeks earlier.

Joshua’s aggression against the shorter power puncher would work against him, as he was dropped in response, and spent the final minute of the 3rd round backpedaling before getting dropped a second time before rising from the canvas to be saved by the bell.

With the fight even but momentum flowing in Ruiz’s favor, I had Ruiz’s aggression giving him the 4th round. Joshua soon woke back up and resumed using his reach and outscoring Ruiz in the 5th. However, it became clear that despite his height and reach advantage, his lack of consistency in using the jab and forcing Ruiz to work to close the distance allowed Ruiz to take back control in the 6th.

The two knockdowns that sealed the fight for Ruiz in the following and final round were academic, but what was far more telling was Joshua’s body language when asked if he wanted to continue by referee Mike Griffin. To be honest, the way he stood in the corner, leaned back with his arms on the ropes, eyes distracted by his corner: whether he was trying to maintain composure, or maybe the damage absorbed had briefly clouded his understanding of how he appeared to the rest of us, what did seem clear was that he did not have the look of a man driven to “get one back” as he had in his career defining victory against the aged Wladamir Klitschko just over 2 years ago.

Regardless of the horrid political disaster that currently seems to plague this sport, I think that Ruiz’ victory brought a collective sigh of relief to those of us fans who, while wanting our favourite fighters to be compensated for their craft, selfishly wish we could just get the fights that we want when we want them, rather than waiting years to pass as fighters worrying more about making maximum leverage out of negotiations as opposed to seeking out the challenges that will cement their legacy. If anything, the millions of dollars potentially lost due to this disruption in the heavyweight landscape may push fighters in a direction to capitalize on the financial opportunities presented to them regardless of the Mayweather-Pacquiao formula that forced upon them.

Ruiz does not have an unblemished record. He does not have particularly unique physical attributes that you would expect from an elite heavyweight boxer, and he certainly doesn’t have the physique you’d expect from world class athlete.

However, what Andy Ruiz Jr (33-1, 22 KO) did show us that he clearly had the ability to box intelligently and effectively, and when presented with the biggest opportunity of his career, ignored his detractors and showed us the mindset necessary to wrestle from Joshua the victory, and earn the distinction of being the unified heavyweight title champion in a time where the heavyweight division is stacked and where, as demonstrated tonight, no man in unstoppable.

The post fight interview with both fighters made it clear that the rematch clause will be invoked and that any questions about Joshua overlooking his opponent will be laid to rest. Regardless of the outcome though, Andy Ruiz’s performance tonight was a reminder of why on the biggest stage, there is no greater potential for excitement in sports than can be found in the sweet science.