In sad news that has been reported by RingTV.com, Argentine warrior Juan Domingo Roldan has passed away due to complications of COVID-19. Known as “The Hammer,” Roldan fought the very best during a long and at times thrilling ring career.

Frighteningly, Roldan passed away just three days after first being diagnosed with the virus. Aged just 63, Roldan died in hospital in his home town of San Francisco, Cordoba.

Our condolences go out to Roldan’s family and friends at this time.

Roldan went pro in December of 1978 and he would go on to face a number of great world champions. A very strong fighter with a solid chin and thudding punching power, Roldan was no stranger to the rough stuff in the ring.

Roldan could dish it out almost as well as he could take it. After suffering the occasional setback early on in his career (a retirement defeat, a DQ loss and a couple of draws), Roldan captured the South American middleweight title and then the Argentina middleweight title.

In November of 1983, when fighting in Las Vegas, Roldan broke into the world rankings in a big way by scoring a KO over Frank “The Animal” Fletcher. The sixth round win, scored on the Marvin Hagler-Roberto Duran under-card, earned Roldan a shot at middleweight king Hagler.

Roldan gave Hagler a good fight in March of 1984 – even scoring a “knockdown” early on in the fight, this in reality a slip erroneously ruled a knockdown by the referee – before being overwhelmed in the tenth round.

Roldan would get further world title chances. After picking up 13 straight wins, the streak culminating with a TKO over James Kinchen, Roldan fought Thomas Hearns in October of 1987, with the vacant WBC middleweight crown on the line. 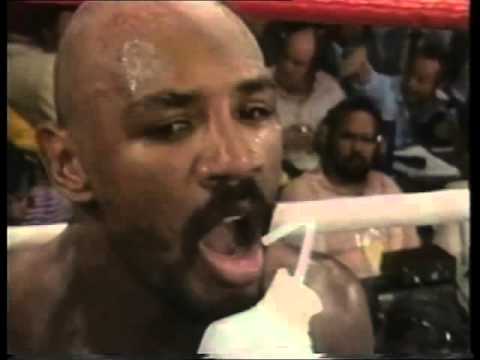 Roldan hit and hurt Hearns at times, this after a disastrous opening round that saw Roldan hit the mat twice; Roldan also going down in round two.

But the bull-like warrior came back, having Hearns on rubbery legs early in round four. Hearns, though, came back himself and left Roldan face-first on the canvas in this same round. Hearns made history as the first man to win world titles at four different weights.

Roldan wasn’t finished yet. A quick KO win over former middleweight champ Hugo Corro in the late summer of 1988 saw Roldan get one more crack at a world title. Roldan faced Michael Nunn in an IBF title challenge in November of 1988. It was a one-sided fight, with Nunn getting the KO in round eight. This was Roldan’s last fight.

Before he fought, and sadly lost, a far bigger fight with a deadly virus.