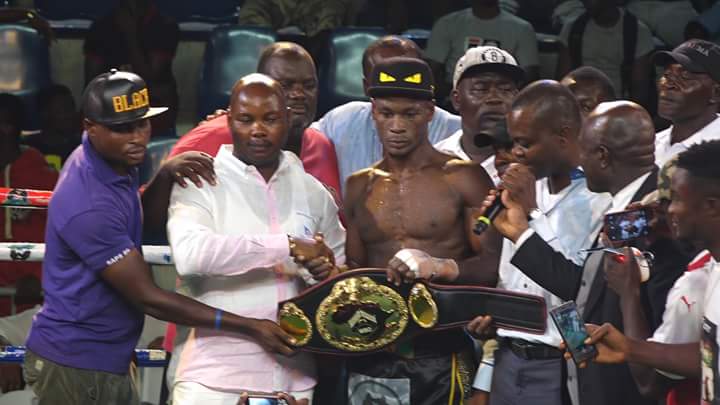 Ghana’s Patrick Allotey (38-3, 30 KOs) has moved a step closer to realising his world title dreams after making it into the top 15 of the latest WBO junior middleweight world rankings released on Monday.

Allotey, a former WBC silver welterweight champion pummeled compatriot, Frank Dodzi to annex the WBO Africa junior middleweight belt via a round 6 TKO victory at the exquisite Bukom Boxing Arena back on April 7 and now has a reward to show for it.

It was the first fight for Allotey under the Cabic Promotions and Management banner he signed unto at the beginning of the year. Cabic CEO, Ivan Bruce Cudjoe and his team have sworn to make Allotey a world champion and are hoping to push him further up the world ratings when he successfully defends the title against Badru Lusabya of Uganda in Accra on August 11.

Meanwhile, another of Ghana’s biggest world title hopefuls, Duke Micah who also holds the WBC international bantamweight title he successfully defended with a split points victory over American, Thomas Snow in New York earlier this month, also moves up a place to third on the WBO bantamweight world rankings and within reach of possibly challenging title holder, Zolani Tete of South Africa for the world championship. Unbeaten Micah (22-0, 18 KOs) also maintains his number 14 position in the WBC ratings whilst his countryman and former world champion, Joseph King Kong Agbeko who now holds the WBO Africa bantamweight title once held by Micah, also maintains his number 9 world ranking from last month in the same division.

Also keeping his same position from last month’s WBO rankings is world title chasing Richard Oblitey Commey at number 10 in the lightweight division where another Ghanaian fighter, George Ashie moved one step up to 14th spot after entering the top 15 rankings last month on the back of winning the WBO interim Africa lightweight title at the end of April.

Commey who remains the IBF number one contender and is billed to fight next on the undercard of old rival, Robert Easter Jr’s IBF-WBC unification battle against Mikey Garcia in Los Angeles on July 28, has however moved a step down to number 4 in the WBC lightweight ratings.

The trio of Fredrick Lawson, Rafael Mensah and Isaac Sackey all keep their positions from last month in three different bodies. Lawson (27-1, 21 KOs) is waiting for confirmation of the date of his next fight against Chris van Heerden of South Africa in the semi finals of the WBC welterweight tournament and stays number 15 WBC welterweight in the world.

Rafael Mensah on the other hand remains the number one contender but is hoping to go a step further by making history and winning Ghana a second world title on July 21 in Las Vegas when he fights for the WBA super featherweight belt against the titlist, Alberto Machado of Puerto Rico.

24 year old Isaac Sackey defeated experienced Raymond ‘Chorkor Banku’ Commey in April to become the WBO Africa junior featherweight champ and as a result make it into number 14 in the rankings to the world title held by countryman and namesake, Isaac ‘Royal Storm’ Dogboe of course. Sackey who has been called out by rising compatriot, Wasiru ‘Gyata Bi’ Mohammed remains at number 14 in the world.