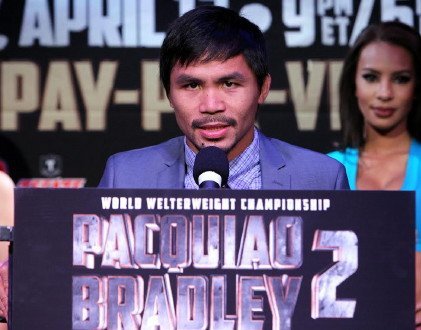 (Photo credit: Chris Farina/Top Rank) Manny Pacquiao and Tim Bradley spent most of the time during their small 2-city press tour talking about aggressiveness and the killer instinct. Bradley thinks Pacquiao has lost his killer instinct, and Pacquiao not surprisingly agrees with him and is vowing to bring it back for their fight on April 12th at the MGM Grand in Las Vegas, Nevada.

“Maybe he’s right,” Pacquiao said in agreeing with Bradley about him losing his killer instinct. “I’m sometimes just too kind and too nice to my opponents in the ring and that’s why you can’t see the aggressiveness and killer instinct. This time around I have to get it back and show I still have it.”

Well, Bradley could make it a little easier for Pacquiao to show his “Killer instinct” if he wouldn’t move so much in the rematch. The last time they fought in 2012, Bradley moved so much that he ended up injuring both of his feet. Bradley was in a mad hurry at all times to get away from Pacquiao to avoid getting hit, and it made the fight boring much of the time. Bradley fought well enough to win maybe 2 rounds, but the judges were favorable to him on that night, and he ended up winning a decision that he clearly didn’t deserve.

Bradley then turned around and got the stuffing beaten out of him by Ruslan Provodnikov in his next fight when he tried to fight without moving constantly, and he was very fortunate to get the decision. Bradley feels that he looked so bad because he didn’t move as much, but with the way that Provodnikov was cutting off the ring on him, he really had little choice but to go to war with him. If Bradley didn’t throw punches when he was trapped, he would have been knocked out. As it was, Bradley came very close to getting stopped in the 12th round.

It’s going to be tough for Pacquiao to be more aggressive in the rematch, because Bradley is clearly going to be circling the ring all night long like he was in the Juan Manuel Marquez fight. Pacquiao’s trainer Freddie Roach needs to have Pacquiao training by having him jogging after his sparring partners because it might take that kind of training to get Pacquiao properly ready for the kind of nonstop movement that Bradley will be doing on April 12th.

This fight could end up being a stinker like their previous fight if Pacquiao can’t cut off the ring and force Bradley to mix it up.