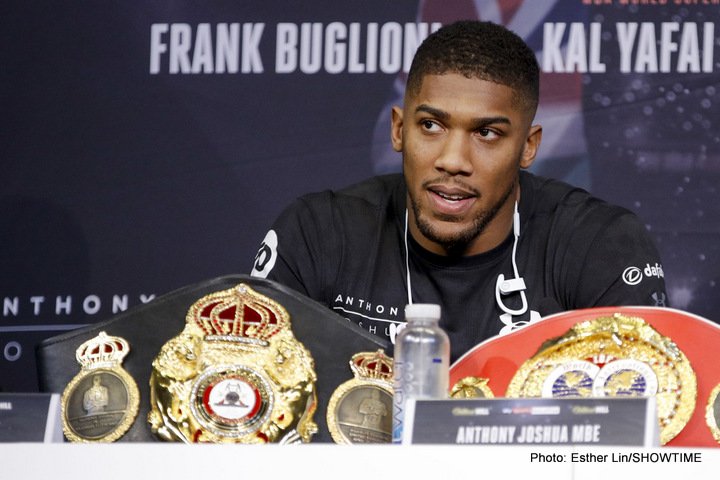 Fans have both read and heard the various insults Tyson Fury has hurled Anthony Joshua’s way; the soon to return, unbeaten lineal heavyweight champ vowing to do all manner of things to the reigning WBA/IBF champion when they meet, possibly next summer. And Joshua, usually a reserved, polite and fully respectful person, has had enough of it. AJ says he is no longer able to respect Fury and that Fury has discredited everything he has accomplished.

“What we are achieving as heavyweight champions is phenomenal,” Joshua, 20-0(20) told BBC Sport. “But for someone in my own industry to discredit it, I can’t respect that person. I don’t respect him (Fury). I don’t have much respect for many boxers in the heavyweight division. It’s not an act with me. I’m being honest. I used to. I used to say very nice things. If I speak well of Tyson Fury and say,’ what he’s achieved is so hard and I respect him’ it builds the credibility of the heavyweight championship belt up. But when Tyson Fury says, ‘Anthony Joshua is a bum’ and, ‘look at him, he’s struggling against this opponent,’ it discredits everything I’ve achieved.”

Fury of course, is critical not only of Joshua, but of every rival or potential rival of his and maybe he has managed to get under Joshua’s skin already. If this is the case, then just imagine what the pre-fight pressers and face-offs will be like for Joshua. But Fury-Joshua is a fight everyone wants to see, and Joshua knows it.

“He is a lively opponent when he is fit,” Joshua said of his fellow Brit. “He’s more than welcome to enter a ring with me. It’s something we should be focusing on in 2018. With all due respect to Tyson Fury, it would be wise if his handlers got him a few fights. Get the body ticking over again and get that love for the sport back. Get a few wins under the belt and then we can get cracking.”

Fury is expected back in the ring around April time, all being well, and everyone is interested to see who the comeback opponent will be and how sharp Fury will be in his first fight in around two and-a-half years. Rest assured though, a Fury-Joshua fight will not go away as long as both men are unbeaten, and there will be some serious bad blood in the air right until the first punch is thrown.

Who wins? That question cannot be answered until we see how much of his skill-set Fury has retained. But this much can be said, the Fury who beat Wladimir Klitschko gives Joshua a very, very tough time indeed.