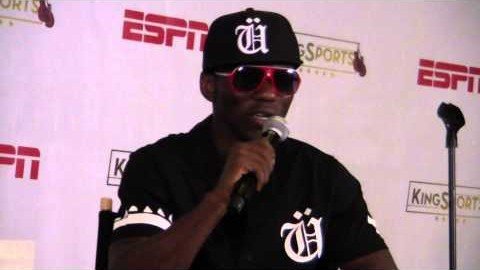 In a rather dull fight, Former WBO 160 pound title holder Hassan N’Dam N’Jikam (31-1, 18 KOs) beat Curtis Stevens (27-5, 20 KOs) by a 12 round unanimous decision tonight to earn himself a shot at the winner of the fight this month between IBF middleweight champ Sam Soliman and former middleweight champion Jermain Taylor.

As expected, N’Dam did an awful lot of moving to keep out of the way of the harder punching Stevens in their fight at the Barker Hangar, in Santa Monica, California, USA. Stevens walked into a right hand in the 8th round and was knocked down. N’Dam foolishly tried to finish Stevens off, and got caught with a couple of big right hands from Stevens. Those shots from Stevens changed N’Dam’s mind about trying to score a knockout.

Stevens’ trainer kept telling him in between rounds to go after N’Dam and stay close to him. But instead of doing that, Stevens would slowly move around the ring and not get in close the way he needed to. A short fighter like Stevens needed to bull his way in the same way that Mike Tyson used to do, but Stevens seemed unwilling or unable to fight with that kind of style. That was Stevens’ only chance of winning and he couldn’t do that. For the most part, Stevens just looked like a guy who wasn’t fully prepared for the fight.

N’Dam looked beatable tonight if he’d been in the ring with a better prepared fighter. I don’t think he could hang with Miguel Cotto, Daniel Jacobs, and especially not Golovkin. We already saw what happened to N’Dam when he fought Peter Quillin two years ago in N’Dam getting knocked down 6 times in the fight in the process of losing a 12 round decision.
Other action on the card: