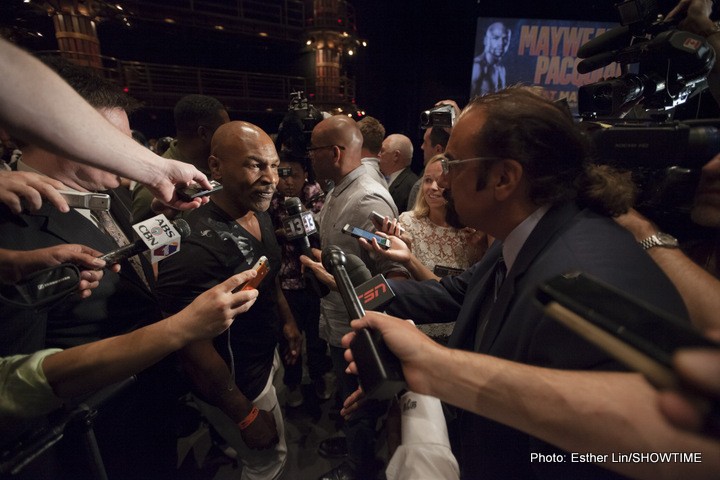 It’s coming up three years since The Greatest, Muhammad Ali, passed away. Yet no-one will ever forget him, least of all hardcore fight historian and fellow great Mike Tyson. Tyson’s knowledge and passionate understanding of the sport he himself electrified is well-documented, but Ali has a special place in Tyson’s heart and mind. This much was again confirmed when Tyson, now 52 years of age, was a guest on ‘The I Am Rapaport Stereo Broadcast.’

Tyson was asked about the ill-fated Ali/Larry Holmes fight from 1980, the fight that saw an ageing, shadow of his former self Ali take a sad beating. Tyson became emotional whilst recalling the absolute refusal to quit Ali showed, his willingness to “die for this s**t.” Tyson said Ali is utterly without compare when it comes to the heart and guts a fighter must have.

“This is the thing about Ali, when we were watching him get beat up as an old man – even when I as a young kid – he’s not going to quit, you’ve got to kill him. He won’t quit. He was getting beat up every round, he had the s**t kicked out of him by Larry Holmes,” Tyson said. “Is the champ done? No, come on, let me out. They wouldn’t stop. He had to stand up there and take the beating like a man. He wouldn’t quit. In that way I respect the guy so much. I have so much admiration for the guy. So much, but it’s just not right to do that as a human being. Just say ‘It’s over. I’ll come back another day. It’s over. You got me.’ I always like to think I’m a bad mothef****r. A vicious motherf****r. But that’s the part where he, Ali, overshines me, because I can’t understand a man that’s willing to die for this. I talked the s**t, but he’s the real deal.”

At this point in the interview, Tyson became overwhelmed and unable to continue for a while. When he regained his composure, the youngest ever heavyweight ruler gave Ali yet more respect.

“Ali is a giant,” Tyson stated. “There’s no way other fighters can match him. He’d die for this s**t. I’m not going to die for this. That’s real talk. Ali is a savage, he’s an animal. He’s a different breed of person. He’s not like us.”

Ali’s heart, courage and refusal to ever give in are of course legendary, but the Holmes fight never should have happened. Famously, Ali was already suffering from slurred speech, faded reflexes and, most shockingly, and reported after the fight, the inability to touch his nose with his finger in a rudimentary test. Yet even when he had nothing other than his raw courage, Ali kept going. As fans know, the fight was finally stopped after the tenth-round, yet even then Ali would have gone out for more (and Drew “Bundini” Brown argued with Angelo Dundee to allow him to do so).

Was Ali the bravest heavyweight of all-time? Maybe so. Mike Tyson sure thinks so.