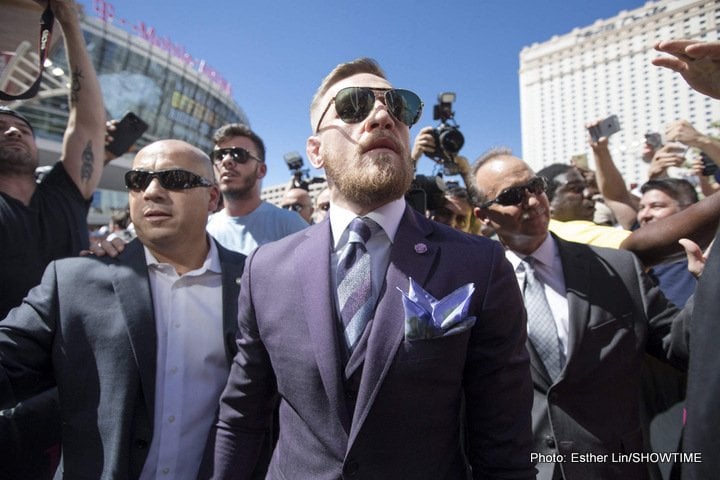 The grand arrivals took place yesterday evening in a buzzing Las Vegas, with Floyd Mayweather and Conor McGregor given the red carpet treatment. Though Saturday’s crossover fight has been, and is being, derided by many, the fans in attendance are excited about it.

Down to curiosity it may be (fans are wholly unsure of what to expect when the bell rings) but millions of people are expected to tune in – one report says that as many as an incredible 1 in Six Americans could wind up watching the bout on TV. Mayweather, though, says he has doubts McGregor has trained as hard as he should have for the contest; at least Mayweather strongly suspects the MMA star is currently carrying a good deal of excess weight – perhaps as much as ten-pounds more than the 154 pound weight limit allows.

Speaking with FightHype.com, Mayweather said that if McGregor does fail to make the weight at Friday’s weigh-in, the fight will still go ahead but that McGregor will have to pay a “heavy fine.”

“Conor McGregor is extremely heavy right now, I think he’s 164, he still has ten pounds to go,” Mayweather said. “He’s got to get that weight down, a true champion is very disciplined and very responsible but we’ll see. If he doesn’t make the weight we’ll still fight but it’s going to be a heavy fine.”

Mayweather, looking in great shape, with no concerns over making 154 himself (even seen out eating Whoppers ahead of this, a monstrous money fight) had his weight claims rebuffed by McGregor, who told reporters in Vegas that “He knows nothing.”

“Let him keep praying. Praying for weight, praying for fatigue, praying for me to take a back-step – all he’s doing is praying to the new God of boxing,” McGregor said of Mayweather. “My weight is absolutely phenomenal. Tell me one time I have ever missed weight or not performed? Let him think what he wants.”

Many fans are expected to attend Friday’s official weigh-in while millions will likely tune in on TV. Will McGregor struggle to make 154, or is Mayweather merely “praying” for an advantage?