Lomacheko open to Teofimo rematch at 135

“I said before, I’m still 135, and I want to be undisputed world champion,” said Lomachenko when asked whether he would move down to 130 to face WBO super featherweight champion Shakur Stevenson next.

“He has big power, experience, and he’s not afraid to go on the inside, and it’ll be very interesting,” said Lomachenko about his fight with Commey. “It’ll be hard for me and for him too.

“We have judges for this, and I was in the same situation, but nobody cared what I said after, and nobody cares what I said now,” said Lomachenko when asked for his reaction to Teofimo Lopez losing to George Kambosos last November.

“First of all, I continue my career for the belts, but if I have the chance to make it organize this fight, I can; I will be happy, but only at 135 pounds,” said Lomachenko when asked if he’d be interested in a rematch with Teofimo to try and avenge his loss from October 2020.

“I can’t go up to 140 lbs for this fight with Lopez. I can’t because it’s not true. I’m a fighter from smaller sizes.

It doesn’t look likely that Lomachenko will ever get a rematch with Teofimo Lopez now that the former undisputed lightweight champion is moving up to 140.

As Lomachenko pointed out, he’s not going to move up to 140 to try and avenge his loss to Teofimo. If that second fight is going to happen, Teofimo will need to move back down to 135 for it to occur.

Teofimo obviously won’t do that because his health won’t allow it. We saw what happened to Teofimo in his loss to George Kambosos Jr. on November 27th. Teofimo looked like death staring with sunken eyes and totally depleted from weight loss at the weigh-in.

If Teofimo’s career implodes at 140, which it may very well be, it won’t matter that Lomachenko doesn’t get his chance to redeem himself.

“I never think about a fight,” said Lomachenko when asked if there’s someone that is a dream match-up for him. “For me, it looks like Olympic games. When you prepare for the Olympic games, you fight for the gold medal.

“You know your glory. It’s the same situation with me in the professional [ranks]. We have the four belts, and this is my goal, that’s it,” said Lomachenko.

“I’ve always said that I’m open for every fight, but you know we have boxing politics, and we have different promoters,” Lomachenko said when asked if he’d be interested in fighting Gervonta Davis.

“Mayweather says, ‘We have our way and forget about us. We making money.’ Because they know I have real skills,” Lomachenko said when asked why he thinks his name wasn’t mentioned during the Gervonta ‘Tank’ Davis vs. Isaac ‘Pitbull’ Cruz post-fight press conference last Sunday night.

“They’re [Mayweather Promotions fighters like Tank Davis] only fighting on Showtime, and they’re fighting with guys who they believe they can win this fight. They pair their fighters against opponents that they believe their boxers can beat.

“He had a very smart strategy, and, of course, he was very fast and smart,” said Lomachenko on George Kambosos Jr. for why he was able to defeat Teofimo. “I don’t know. Unless I fight with Kambosos and Haney, then I can compare,” Lomachenko said when asked who will be the tougher fight for him between Devin Haney and Kambosos.

“No, we have a rule,” said Lomachenko when asked if he believes he’s being blocked out by the champions like Haney.

If there were some way for Lomachenko to jump the line to get to Kambosos, that would be an excellent opportunity for him to pick up four belts the easy way.

Kambosos hasn’t said who he plans on fighting next, but he’s been dropping massive hints that he’s favoring WBC lightweight champion Devin Haney.

Devin is arguably the weakest link among the champions at 135 right now and the only one that Kambosos has a real shot at beating.

Lomachenko’s only chance of getting a fight against Kambosos is if his promoter Bob Arum makes a huge offer, but that’s not likely to happen. Lomachenko vs. Kambosos wouldn’t sell if Top Rank put it on ESPN+ PPV.

“We’re grateful for the opportunity Richard [Commey] is getting,” said promoter Lou DiBella. “When you have a fighter as great as Loma, who I think has the best footwork than anybody I’ve ever seen in my lifetime.

“Literally, that’s how good I think your footwork is in the game. It’s something that people will remember for generations as one of the greatest fighters of our time.

“Richard is a good fighter; Richard is a great fighter. He’s a champion, and when a guy like this gets in the ring with his punching power, dedication, and his ability, it’s always dangerous. Loma, this is going to be a real fight, man.

“Richard has a shot. No one expected George Kambosos to come in and do what he did [against Teofimo]. The world is sleeping on Richard a little bit, but with his power, his length, and his reach, I expect this to be a sensational fight, and I think he’s really live to pull off for the boxing fans. But thank you, Loma, for giving Richard the opportunity. We really appreciate it.

“Loma is the #1 contender in the WBO and the WBC, and whoever wins this fight will occupy that spot and end up being the mandatory for whoever is the champion for whenever that mandatory position is called.

“So if you’re looking at world titles, Saturday’s fight [between Lomachenko and Commey] is that path to that position,” said Arum.

“Yeah, sure, I’m 100%,” said Lomachenko when asked if he’s healthy to the Commey fight.

If there is the possibility that Lomachenko has overlooked Commey somehow, he could pay the price in suffering his third career defeat on Saturday.

Commey hits at least as hard as Teofimo, but he’s superior to him in that he doesn’t gas out after six rounds. If Lomachenko is hiding another shoulder injury, as he did in his fight with Teofimo, Commey is the wrong guy to be fighting. 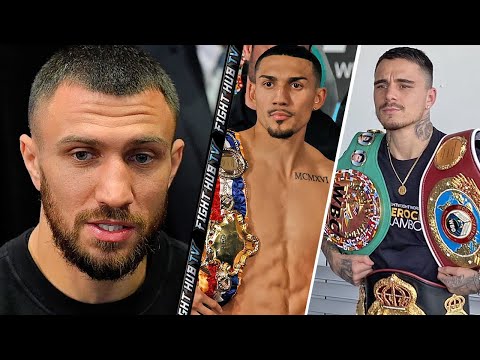