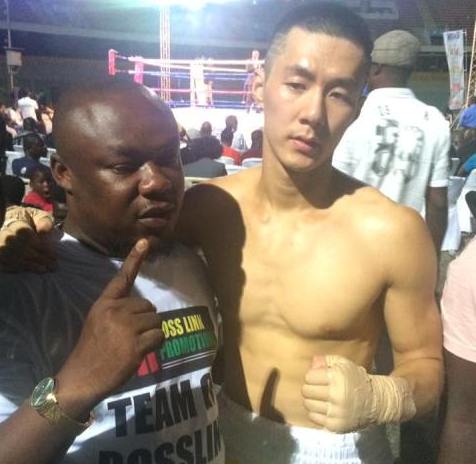 Lee Kyu Suk claimed a second straight first round win in only his second professional fight after stopping Ghana’s James Lamptey in a Welterweight contest on the undercard of Isaac Dogboe-Edward Kakembo WBO Africa championship in Accra on Saturday night.

Lee who arrived in the West African country two months ago on a 6-month training tour to hone his boxing skills, launched his professional career with a round one victory over another Ghanaian, Francis Gakpetor back in April and the Korean was at it again on Saturday night at the Accra Sports Stadium in front of dignitaries including former Ghana president, Jerry Rawlings and former boxing world champion and Hall of Famer, Azumah Nelson.

Despite the massive home backing for Lamptey, Lee was unfazed and went to work early delivering a couple of jabs and uppercuts to the body and head of the Ghanaian barely seconds into the fight. So much was the dominance that Lamptey was soon sent sprawling to the canvas following a vicious right hook and left uppercut combination.

The Ghanaian failed to beat the count and referee Roger Barnor had no choice than to stop the fight at only 1:16 of the very first round, sending into excitement Lee and the handful of Korean residents in Ghana who were at ringside to support their countryman.

“I am happy I won again, it wasn’t an easy fight as you may think but I am glad my hard work paid off. I came to Ghana to learn boxing because of their rich history in the sport producing Azumah Nelson and many other world champions and I’m happy it’s all going well,” Lee said post fight.

Ghanaian sports promoter and financier, Collins Bio Donkor whose Gh Bosslink Promotions secured the partnership that brought Lee to Ghana, was also in ecstasy about the good show from the Korean boxer and is confident the two countries can do more work to promote boxing.

“Lee has really settled well, works really hard and is always ready to learn. We are delighted with his performance so far and hope it open the way for other boxers from Ghana and Korea to partner for more exchange programmes because we have talents and they can also support us with facilities,” Mr. Bio Donkor said.