Earlier today in Australia on the under-card of the Mairis Briedis-Jai Opetetai cruiserweight title fight, middleweight contender Isaac Hardman scored a chilling one-punch KO that may well go down as The KO of the Year. Facing fellow Aussie Beau Hartas, Hardman landed a monster right hand to the head that dropped Hartas the split-second it landed. It was a brutal punch, leading to a brutal KO. Time was 2;49 of the opening session.

Hardman, who was coming off his first pro defeat, this at the hands of Michael Zerafa, is now 13-1(11) and his nasty knockout has been attracting a ton of attention on the net since it took place. Hartas, who was out cold and remained on the man for some time, is now 6-3(4). 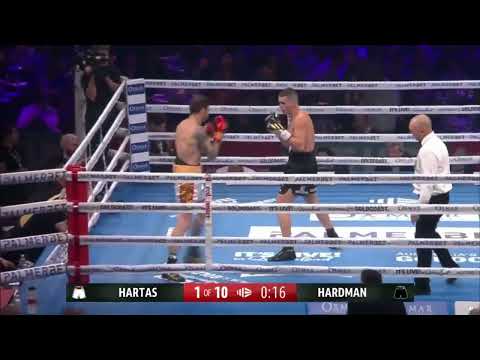 The two middleweights went at it right from the opening bell, the toe-to-toe action great to watch. Both guys landed some good shots, yet it was apparent Hardman carried the heavier hands. Then, uncorking the best, most devastating punch of his career (thus far), Hardman put Hartas’ lights out and made even hardened ringside observers cringe. To repeat – this one was just nasty.

And although neither fighter is a proven elite or a big name, it seems, here in July, as though today’s KO scored by Hardman will have a great chance of winning the KO of the Year trophy when the time comes to dish out the trophies.

It will be interesting to see where Hardman goes from here. The loss to Zerafa – a second round KO defeat that came in April – came as a setback, but Hardman showed zero ill effects today. Certainly, Hardman was not gun-shy in any way. A return fight between Zerafa and Hardman would certainly be interesting, and maybe Hardman, who is still only 25 years of age, could get his revenge.

The monster punch Hardman laid out Hartas with would likely KO any middleweight out there. Hardman’s KO from earlier today has already been viewed many thousands of times over on YouTube.