Last night in his home country of Spain, European 154 pound champ Kerman Lejarraga scored a chilling one-punch knockout over Britain’s Jack Flatley. The huge right hand Lejarraga drilled his challenger with in the ninth round took him out instantly and Flatley was laid flat on his back, out cold. Lejarraga is now 34-2(16), while the gutsy Flatley, who really gave is his all last night, drops to 17-2-1(4).

Lejarraga had a great start to the fight, while Flatley had a terrible start. 29-year-old Lejarraga dropped his 27-year-old challenger with a hard jab in the opening session and for a time it looked as though Lejarraga might have himself a short night. But Flatley dug in hard and after he had recovered, he managed to give the champion a hard night’s work. It was good action all the way but Lejarraga was the stronger, harder-punching man. The Spaniard is a relentless fighter and last night the pressure he put on Flatley proved to be too much. Both men were marked up around the face and each warrior knew he’d been in a fight. 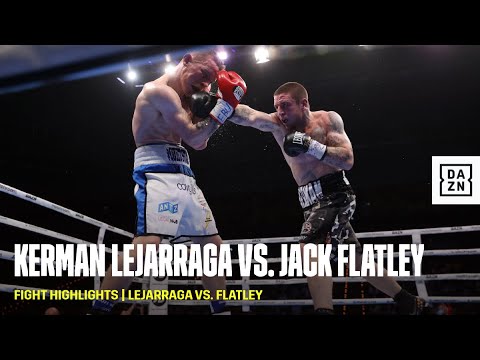 Flatley, who had never previously been stopped, won some rounds but he was sent down again in round eight. Then, in the ninth, Lejarraga scored a KO that, had it been thrown and landed by a bigger star, on a bigger star, might be in the running for KO of the Year award. As it is, this one will surely get an honourable mention when the awards are handed out. The split-second Lejarraga’s right hand landed, Flatley’s body went limp and down he went in chilling fashion. Flatley remained prostrate on the canvas for quite some time. Thankfully he was okay.

Lejarraga may never become a world champion (his two pro defeats coming against David Avanesyan, with Lejarraga being stopped by the former WBA interim welterweight champ both times in 2019), but he is a dangerous fighter for anyone and he always gives his fans great action. Lejarraga is a thoroughly entertaining pressure fighter and at European level he really will take some beating. Maybe Avanesyan simply has Lejarraga’s number.

As for the brave Flatley, he didn’t get the win last night but he sure earned himself a lot of credit.