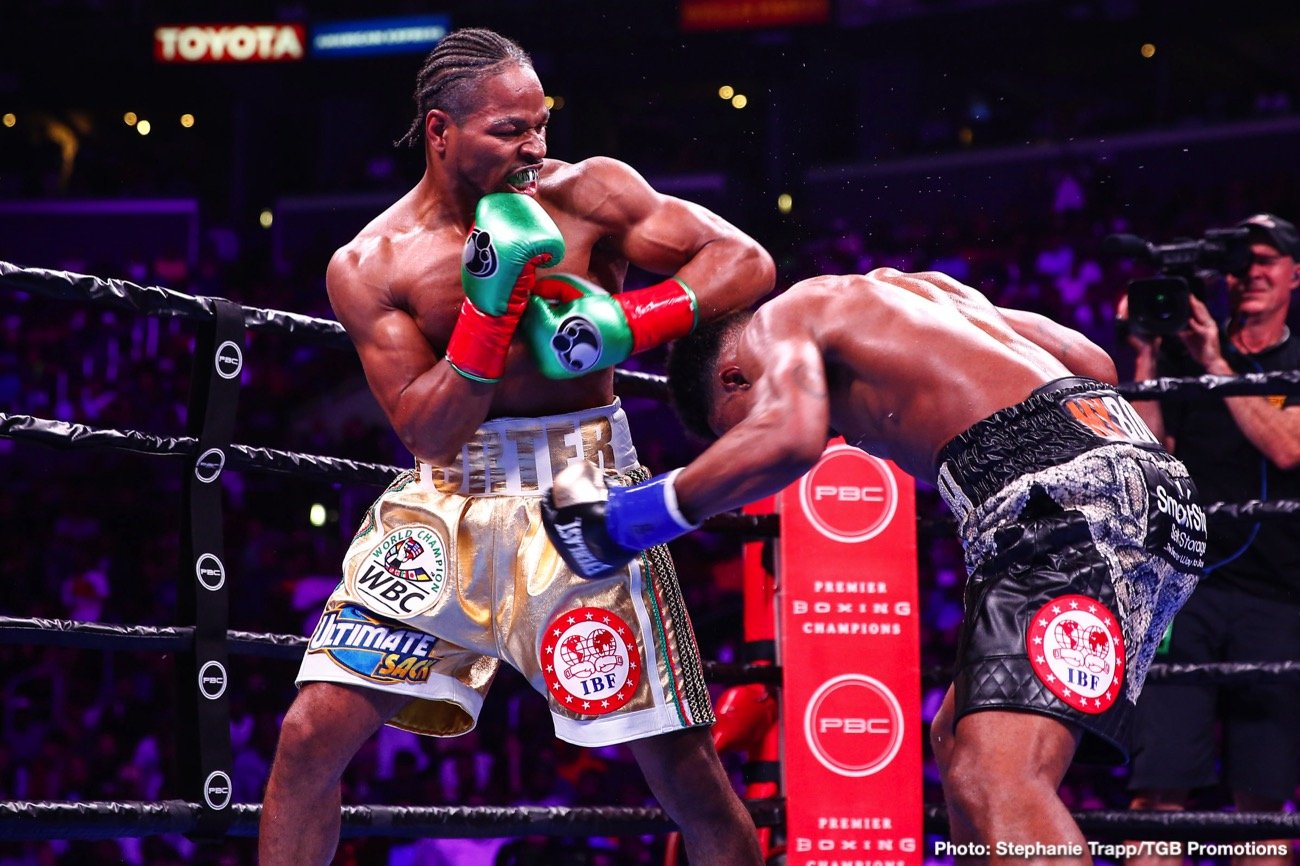 Trainer Kenny Porter is angry about both the fouling by Errol Spence Jr. and the scores that were handed down by two of the judges in last Saturday’s welterweight unification fight between Errol and WBC champion Shawn Porter at the Staples Center in Los Angeles, California.

Kenny says he complained to the referee Jack Reiss about Spence’s low blows, but he was told that he was wearing his boxing trunks high, and there was nothing he could do about it. However, even if the referee had warned Spence about his shots straying low, it likely wouldn’t have changed the outcome.

Spence was still landing the harder shots in the fight, and it wouldn’t have mattered if he were forced to aim a little higher with his punches.

“I said it was a dozen, and someone said that it was a lot more than a dozen low blows. I said to the ref, ‘He keeps hitting us low.’ ‘Well, Shawn has his shorts up high. There’s nothing I can do about it,'” said Kenny in complaining about Spence hitting Porter on the beltline.

Kenny doesn’t agree with the 116-111 scores for Spence

“It’s obvious now that they got to give him credit for what he did, and what he does,” said Kenny about Shawn. “I’m not in agreement with that wide score. I thought all the rounds were pretty close. Of course, that one where Errol definitely took when Shawn’s hand touched the canvas, but all the rounds were close. I could see it going our way or being a draw. But I damn sure don’t see it being 116-111.

“He looked at me and said, ‘Damn,'” said Kenny about Shawn after he was dropped by Spence in round 11. “It wasn’t a full-fledged knockdown. He did get touched, and he touched it [the canvas]. He didn’t even have to take his body weight to push off the floor. His hand really did just graze the canvas, but it’s boxing. Errol landed a good shot,” said Kenny.

In looking at the fight, one could agree that 116-111 was a fair score in Spence’ favor. Porter got the worst of it in 10 of the 12 rounds of the fight. He didn’t have the same power that Spence possessed. Given that both fighters landed roughly the same amount of shots, it’s easy to agree with the judges that Spence deserved the win by the 116-111 scores. Porter was nailed with huge shots from rounds 3 to 12. In the 11th, Spence knocked Porter down. If you want to win a fight, you don’t let yourself get knocked down.

“The heart that Errol had made him fight a fight that was more geared towards Shawn,” said Kenny. “If he used his reach more, he might have had a cleaner fight where you could score and say Errol was more in control. But because Shawn was in close getting good body shots off, which I’m now hearing is he wasn’t getting any credit for his body shots on the Compubox scores were were popping off. Shawn came out of this without any scratches,” said Kenny.

Spence absolutely fought Shawn’s fight by electing to slug it out with hi rather than boxing from the outside to control the contest like he’d done against Mikey Garcia. When Spence did fight at range in the championship round last Saturday, he ran away with the fight in out-boxing Porter  rounds 10 through 12. During those rounds, Porter ate a lot of hard shots from Spence, and he was getting caught repeatedly as he came forward. Porter couldn’t mug Spence on the inside the way he did with Andre Berto, Danny Garcia and Paulie Malignaggi.

Porter to return in the spring

“He’s not hurt or anything like that. So we’ll be ready to go in the spring,” said Kenny about Porter’s next fight. “We’re not getting a rematch. Errol’s not taking that fight. We’ll take any of the top welterweights that want to fight. It could be [Manny] Pacquiao. It could be Terence Crawford. We love it. He definitely does,” said Kenny when asked if Porter has the best resume in the welterweight division. Like Errol said, ‘All his [Porter] fights were close.’  Well, guess what, Errol? You’re fight was close,” said Kenny.

It’s interesting that Kenny is saying that Porter is willing to fight WBO welterweight champion Terence Crawford. The fat that Porter is interested in that fight suggests that he’s looking to cash out. This isn’t a good time for Porter to be taking on Crawford. The best time for Porter to face Crawford would be after a big win, not a loss. Porter needs to fight Crawford while he’s still relatively at his best. If Porter waits two or three years, he’ll lose something from his game, and possibly get beaten by Crawford. There’s no other champions at 147 that will likely give Porter a world title shot.