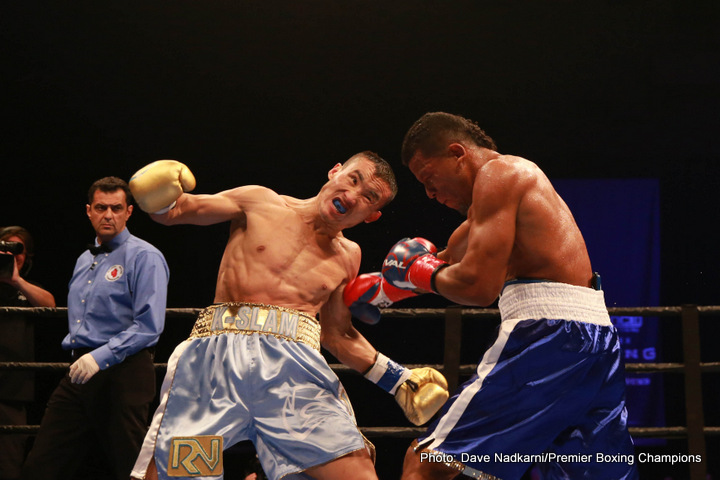 Undefeated contender Kanat Islam (21-0, 18 KOs) stopped Colombia’s Jesus De Angel (18-4-1, 17 KOs) in the sixth round of Sunday night’s main event on Premier Boxing Champions: The Next Round on Bounce TV from the Lakeland Center in Lakeland, Florida.

The rising 154-pounder from Kazakhstan stopped his ninth straight opponent inside the distance when De Angel fell to the canvas twice in round six prompting referee Telis Assimenios to halt the bout 22 seconds into the round.

De Angel appeared to succumb to an ankle injury while taking a step backward that forced him to drop to the canvas. Islam sensed his moment and pounced on the injured brawler to put an end to the bout quickly. De Angel was taken to the emergency room after the fight due to the in-ring injury.

A 2004 Olympic Bronze medalist, Islam was able to navigate around the four-inch reach advantage owned by De Angel and control the fight with his athleticism and powerful right hand. His first headlining appearance was a successful one as he looks to continue to climb the ladder towards a world title.

The friends turned rivals brought the action from the beginning as the smaller southpaw Figueroa aggressively attacked the body of Cruz in early exchanges. Cruz’s timing improved as the fight went on and his combinations began to land and stunt the attack of Figueroa.

Some of the best back-and-forth action came in round six as both fighters had found their way through the opponent’s defense. Cruz used his length to beat Figueroa to the punch, but Figueroa continued to throw punches and do plenty of damage throughout the heated final stanzas.

Galarza used his length advantage to break Suarez down with his jab and penetrate his defense with various combinations. The Brooklyn-born fighter now training out of Orlando dominated the first half of the fight on his way to the unanimous decision.

Suarez began to pick up the action in the second half of the fight landing several hard punches and challenging Galarza to exchange in the middle of the ring in round five. He landed perhaps the best combination of the fight in round six with a pair of punches that sent Galarza into retreat mode for the remainder of the round.

Overall it was Galarza’s output that proved to be the biggest difference as he threw 421 punches to Suarez’s 305 on his way to a 117-99 advantage in punches landed. The judges’ scores were 77-75 and 78-74 twice for Galarza.

Here is what the fighters had to say Sunday night:

“It felt good to go to (six) rounds to get the win. My last few opponents didn’t put up a fight and challenge me. My team wanted to test me and everything went to plan for what I wanted to do in the ring.

“I boxed, I used my feet, I moved in and out, I set up my power punches and I was able to finish him off. I hope he’s OK, I know it’s hard to fight with an injury. I hope he recovers soon.

“I saw he was beginning to get tired around round four and knew I had him hurt. That’s when I started hitting him with harder punches. I did the work I wanted to do, and then I wanted to finish him.

“There were a lot of fans from the Kazakhstan community here, a lot of fans who traveled from far places to see me fight. That meant a lot to me. I wanted to make sure they got to see everything I can do in the ring. Now I want them to see me win a world title this year.

“I feel like I can come back tomorrow. I don’t want any longer breaks in my career. I want big fights. Who are the champions? That is who I want to fight.”

“I know that I won the fight in the end, but it was a hard fight, a very tough fight. I was landing the cleaner shots but there were times where he was putting the pressure on me. He hurt me with body shots and he actually managed to hurt me in the last round with a right hook. I recognized when he hurt me and I hit him and hurt him right back. I had him hurt a couple of times.

“I knew he was a tough guy from when we fought in the amateurs and from when we sparred together. He made me bring something out of me that I didn’t even know I had and I appreciate him for that.

“This was the toughest fight of my career. Right now, I want to rest and relax, but within the next 2-3 months I’ll start looking at the guys that can get me closer to a world title.

“The fight’s over, we can absolutely go back to being friends. It’s business. They told us we had to fight each other. We’re better fighters for it and now it’s over and back to the way it was between us as far as I’m concerned.”

“I didn’t think Miguel won the fight but that’s how the judges seen that. I don’t know how, but I can’t do anything about that. The first rounds I hit him clear in the face, Miguel only caught me with a couple of clean shots but I was catching a lot of his punches with my hands and elbows. I don’t know how I lost this fight.

“I love fighting unbeaten opponents. I train with champions in the gym, I have the resources to get me ready for these fights.

“Yes of course we go back to being friends. Nothing personal. He’s my friend. We’re cool.”

“It felt good to go eight rounds. I didn’t mind going rounds, although I wanted to take him out. He was throwing a lot of wild shots just looking to catch me with a lucky blow. He caught me with some good shots but he never had me hurt. I train with southpaws all the time and was ready for anything Yardley Suarez had to offer.

“I want to come back as soon as possible. Whatever my team has in store for me, I’ll be ready.”

“I had him hurt but feel like I let the opportunity get away from me. I wasn’t busy enough; I need to let my hands go more. My corner told me that I needed a knockout to win. I went for it, but I couldn’t slow him down and land enough punches.

“I want to stay on this level, I could have done more but know that I can compete with the best.”

PBC: The Next Round on Bounce TV was promoted by King’s Promotions.