Jermall looked both irritated and nervous when he was asked about his thoughts on a fight between him and WBO 160-lb champion Andrae (30-0, 18 KOs) for his next made.

Initially, Jermall seemed like he was keeping it together in giving a measured response to the question. Still, then he seemed to lose his cool, talking nervously, saying that the commissions, sanctioning bodies, and networks could create an obstacle to him fighting Andrade.

It looked like Charlo came unglued from a small question.

With the way Jermall was sounding so pessimistic about the possibility of him fighting Demetrius, it seemed very, very obvious that he wants no part of taking the fight with the talented WBO champion.

When Jermall suggested that Andrade fight Montiel to earn a fight against him, it was crystal clear that he wants no part of fighting the Rhode Island native.

“I’m down to get in the ring with anybody,” said Charlo at the post-fight news conference last Saturday night when asked if he’d be interested in fighting Demetrius Andrade next. 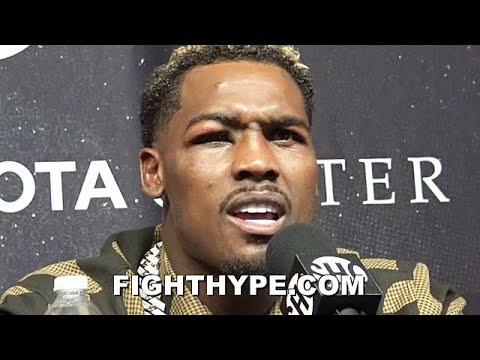 “I just showed y’all a fight like, you know. Let’s see if he could beat the dude [Juan Macias Montiel] I just fought. And then we’ll talk.’

Call it fear or whatever but it sure does look like Charlo wants no part of Andrade, and it’s understandable after watching him struggle against Montiel last Saturday.

Charlo (32-0, 22 KOs) defeated the #4 WBC ranked Montiel (22-5-22 KOs) by a grueling 12 round unanimous decision last Saturday night in a Showtime Boxing televised fight at the Toyota Center in Houston, Texas.

The fight was supposed to be a gimme for the 31-year-old  Charlo, who some boxing fans believe is the #1 fighter at 160.

However, the younger fighter, 27-year-old Montiel, walked through Charlo’s shots all night long to punish him with shots to the body and head.

In the later rounds of the contest, Charlo’s gas tank was totally depleted and was hurt multiple times by Montiel to the head and body.

“We going to clean up the division sooner or later,” said Jermall. “I don’t make the fights. I don’t pick the fights.

“You know, whatever circumstances that he in, I’m not here for none of that,” said Charlo talking fast and sounding highly agitated.

“I’m a fighter. But I don’t have rights to make the sanctioned bouts and to make the commissioners of each belt and he fights on a different network. I’m not into all that, all right?’