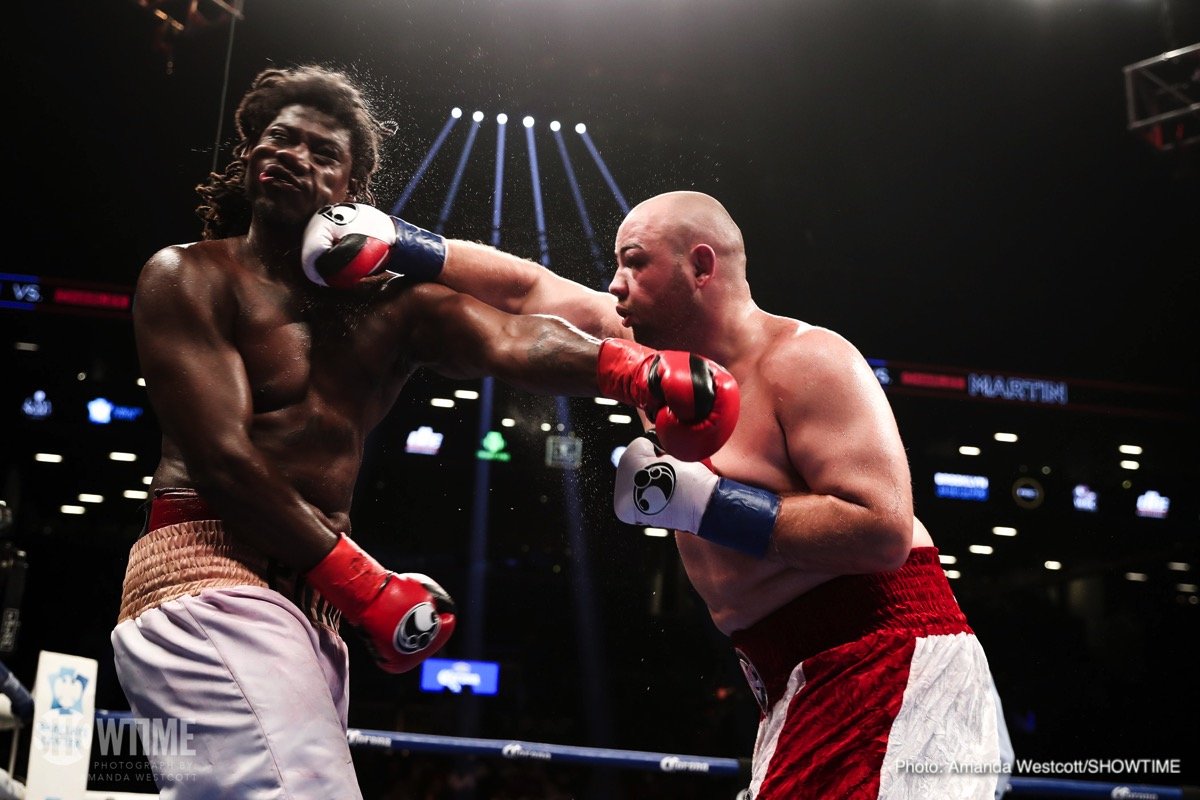 Heavyweights Adam Kownacki and Charles Martin gave us a great fun fight on last night’s Porter-Garcia card – the kind of wild, at times sloppy slugfest fans can warm to. Polish warrior Kownacki, a man who barrels forward and slings out leather with seeming abandon, adopted his ‘as advertised,’ ‘what you see is what you get’ approach against Martin, and though he had a rough patch in rounds-seven and eight, when fatigue set in, the approach worked for the 29 year old. Again. Don’t ever expect to see Kownacki box like a polished, slick pro, but expect guaranteed value for money each and every time he does rumble.

Now 18-0(14) Kownacki said after his biggest pro win how he feels he has proven himself as a top-10 fighter. He’s a whole lot of fun to watch, that’s for sure, but how far can the Brooklyn-based slugger go? “Looks can be deceiving,” Jim Gray said last night, when referring to Kownacki’s less than chiselled physique, and the beaten Martin, 25-2-1(23) could only agree.

Kownacki took some good shots from a determined Martin (who showed the kind of heart and desire he totally left at home the night he lost his brief grip on the IBF belt in his dreadful showing against Anthony Joshua) and his chin held up. Still, with the way he lunges in, drops his hands and basically has no real defence apart from offence at stages in his fights, it’s tough to imagine Kownacki standing up to a Deontay Wilder bomb or an AJ bomb. If he CAN take that kind of power – and we may find out if Kownacki keeps on winning – then who knows, maybe the rugged Pole can become champion one day.

For now, as he works and works his way up the ladder, there are some interesting fights out there for Kownacki. A fight between he and Jarrell Miller would be very interesting (though doubtful seeing how the two are good friends, the two sparring together ahead of last night’s fight), while Kownacki against guys like Bryant Jennings, Andy Ruiz or Trevor Bryan would also be good to see.

Lou DiBella has been saying for quite a while now how Kownacki, despite his less than menacing appearance, can really fight. He showed it last night. So too did Charles Martin. A rematch between these two would not be a bad idea.