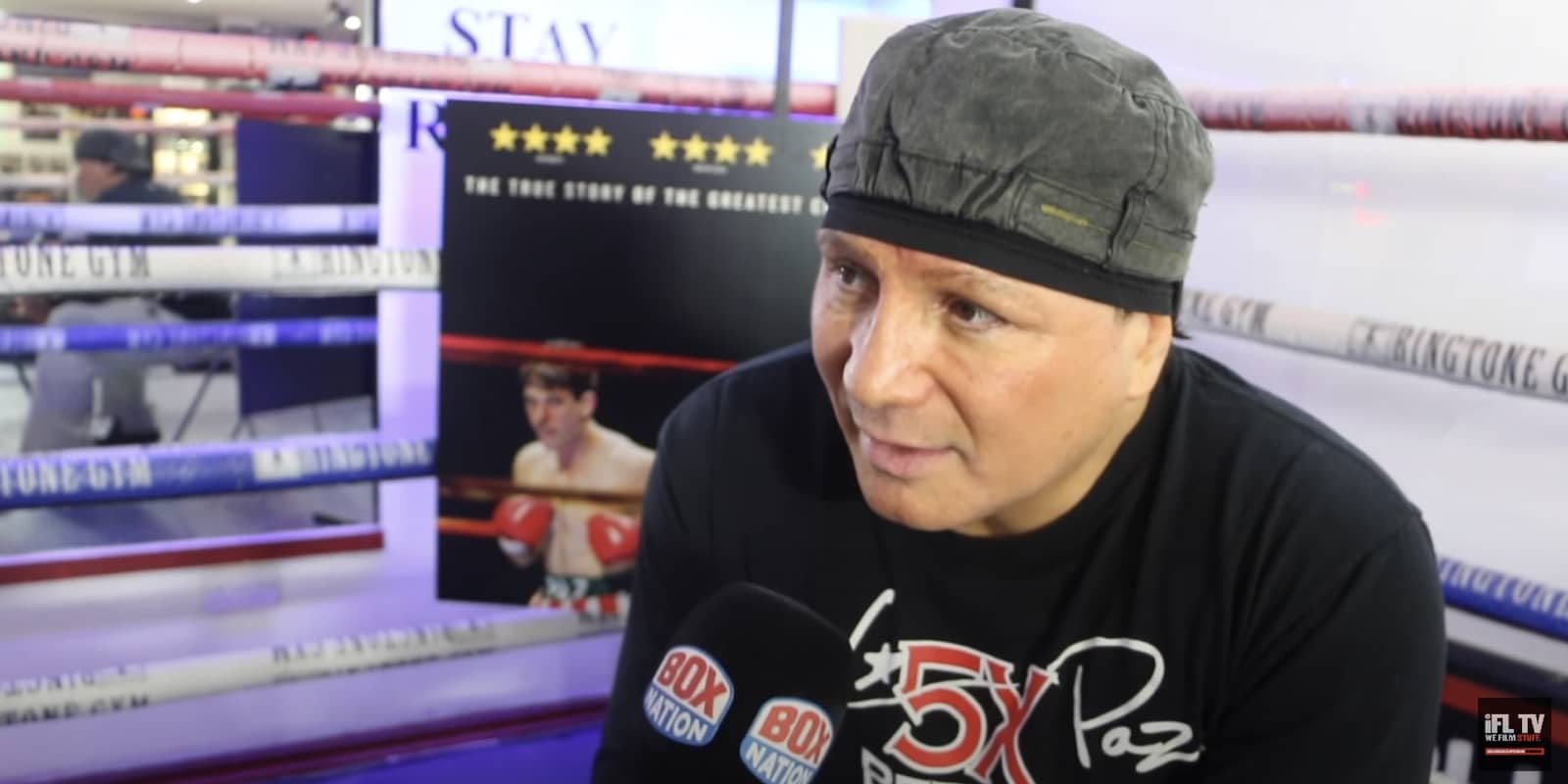 Vinny Paz, formerly Vinny Pazienza, could easily have been handed the unofficial tag of “Miracle Man.” The horrific head-on car smash Paz was victim to back in November of 1991, this at a time when he was still at or around his fighting prime, could have finished off a lesser man. Paz, his neck broken in the crash, was told by the doctors that he might never walk again; that he would certainly never fight again. 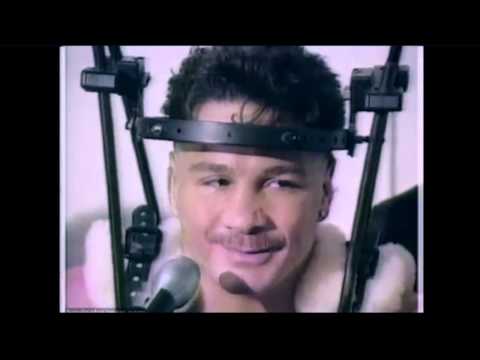 Going pro in May of 1983, Pazienza of Rhode Island soon forged out a rep as an East Coast crowd pleaser – a rough, tough, always exciting warrior who was well worth parting with well-earned dollars to see fight. At his best at 135 pounds, Pazienza would eventually capture belts at 135, 154 and, if you wish to count either the IBO and/or the WBU straps, super-middleweight.

On the way up, Pazienza defeated good men such as Jeff Bumpus (who was known as “The Tazmanian Devil), Melvin Paul, Joe Frazier Jr, and Harry Arroyo. Then, in June of 1987, Vinny had his first bitter encounter with the man who proved to be his career arch-rival, his ring enemy. Enter Greg Haugen.

Pazienza and Haugen didn’t like each other. To put it mildly. Haugen felt Pazienza thought he was better than him, that his rival failed to show him the proper respect. These two men, each as tough, as bite-down determined as the other, were about as evenly matched as could be imagined. “He’s a pretty white boy who thinks he’s something he’s not,” Haugen spat when describing Pazienza. “I hate his guts,” Pazienza fired back.

Eventually, these two ring warriors would fight 40 hard, at times gruelling rounds of battle. At the end, it was still up for grabs who the better fighter was.

Fight-one came in the summer of ’87, with IBF lightweight champ Haugen agreeing to defend against Pazienza in his challenger’s home town of Providence. Pazienza, 22-1 (the loss coming at the hands of forgotten fighter Abdelkader Marbi, who stopped Vinny in five in Italy in December of 1984), vowed to rip the title from the man known as “Mutt.” 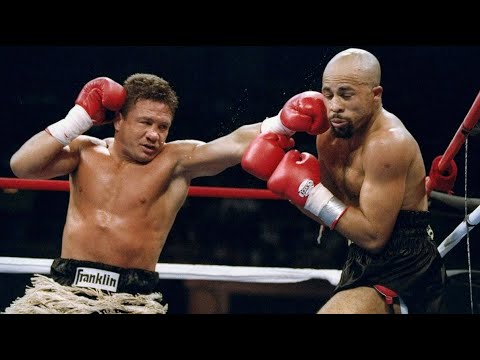 After a draining war that saw both men ship punishment, Pazienza won the belt via 15 round unanimous decision. The rematch came the following February, in Atlantic City, and this time Haugen won via 15 round UD. There had to be a rubber match. It would not come for two-and-a-half years, and the decider would be a non-title affair up at 140 pounds.

Before then, ex-champ Pazienza went up in weight and dropped decisions in two goes at a belt at 140; the first loss coming against Roger Mayweather, the second coming against Hector Camacho. Pazienza bounced back from the two defeats to win the series with Haugen, winning a ten-round UD in Atlantic City. To this day, Pazienza and Haugen remain bitter, with both arguing about the results of all three fights.

Pazienza then lost in a third bid to become a champion at 140, this time via DQ, when he threw defending champ Loreto Garza across the ring in the 11th round. The loss added to Pazienza’s bad boy image. Ever popular, Vinny was afforded yet another title chance just two fights later, this against defending WBA 154 pound champ Gilbert Dele. Pazienza, now aged 30 and sporting a 30-5 record, stopped Dele in the 12th and final round to become a two-time champ.

Then Pazienza almost lost his life.

The car smash occurred in Warwick, Rhode Island, with Vinny a passenger in the car. Pazienza suffered a dislocated vertebra as well as two fractured vertebrae. The sport of boxing was about to witness a truly astonishing comeback.

Pazienza, determined to prove the doctors wrong, was strapped into a cage-like ‘halo’ – the device actually drilled into the fighter’s head. Incredibly, just days after being sent home from the hospital, Pazienza began working out, this in secret. Just 13 months after the crash, Pazienza was back in the ring! It was enough to make a movie about – and of course it proved to be; with Paz’s life story given the silver screen treatment in 2016’s ‘Bleed for This.’ 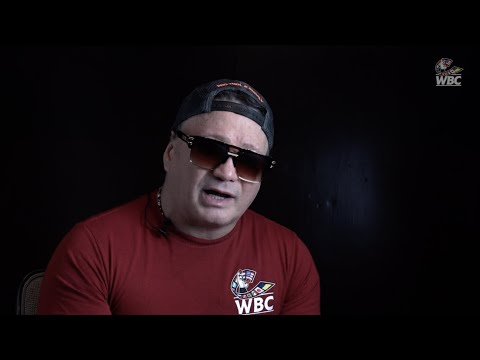 Told he would never fight again, so severe were his injuries, Pazienza royally shoved it to the experts by lacing ’em up again no less than 24 times after the accident. And Vinny got into another bitter rivalry – this one with a living legend.

After returning to the ring with a win over Luis Santana; the points win being a deservedly well-publicised fight, one that was watched behind closed fingers by many fans, Pazienza went on to defeat Lloyd Honeyghan, Robbie Simms, Dan Sherry – and Roberto Duran.

Now fighting at 168 pounds, 31 year old Pazienza recovered from an early knockdown to decision Duran in June of 1994, this in a big fight held in Vegas. As was/is the case with Haugen, Pazienza hated/hates Duran. The two would meet again, in early ’95, with Vinny again winning via decision. Pazienza was then brutally despatched by a peak Roy Jones Junior, Vinny being taken out in six rounds.

One more big win followed, this a TKO stoppage of another guy Vinny couldn’t stand in Dana Rosenblatt. Pazienza was then beaten by a comebacking Herol Graham, he picked up a decent win over Glenwood Brown, and then Pazienza lost the rematch with Rosenblatt. Amazingly, one more crack at a legit world title awaited Pazienza.

In March of 2002, a 39 year old Paz (he legally changed his name in 2001) was outpointed by defending WBC super-middleweight champ Eric Lucas. And then, finally, after a decision win over Tocker Pudwill in March of 2004, the utterly remarkable ring career of Vincenzo Edward Pazienza had reached its end.

Paz, who exited with a final record that reads 50-10(30), during which he was stopped just three times, is a real fan fave these days, his hand eagerly shaken by all fight fans who meet him.

It’s a cliché, yes, but there really is only one Vinny Paz. 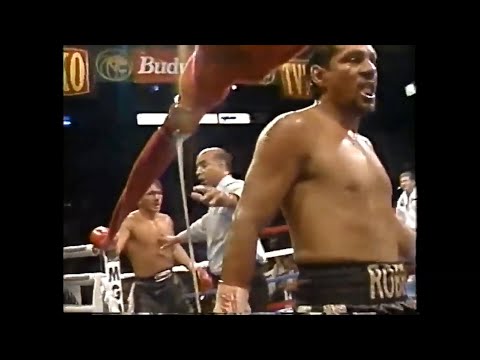