Unified lightweight champion George Kambosos Jr is already expecting a whole lot of excuses coming after he destroys WBC 135-lb champion Devin Haney on June 4th in their fight at the Marvel Stadium in Melbourne, Australia.

Kambosos (20-0, 10 KOs) is predicting that there will be a big fuss made afterward about how Devin’s father/trainer Bill Haney couldn’t make the trip to work his corner for the fight.

The Australian government won’t allow Bill into the country because of an old conviction for drugs from 1992. Instead of Bill being in Devin’s corner, the well-experienced coach Yoel Judah will be the trainer.

Kambosos doesn’t see what the major fuss is all about because he’s had to fight without his father being there, and it didn’t stop him from performing at his best.

Haney isn’t the type to complain if he were to lose and start looking for people or circumstances to blame for his defeat. If Haney loses, he’ll likely own the defeat and not start pointing fingers.

Of course, that won’t stop other people from looking for reasons to explain away Haney’s loss, but he has no control over that.

“I know there will be a whole lot of excuses once I destroy Devin Haney,” told Kambosos Sydney Morning Herald. “About the father, about the trainer, about the jet lag, about everything. I’ve got all of my team here, and I’m ready to fight,” said Kambosos.

Hopefully, Kambosos isn’t too focused on trying to bang Haney out of there because he’s not a knockout puncher. Kambosos is more of a pure boxer who wins his fights by outpointing his opponents.

“Everyone is parading Devin for making the trip to Australia, but they forget that I’ve been doing it for five years,” said Kambosos. “I’ve had to go without my father when I’m going over there.  I’m always ready to fight by any means, to fight by myself.”

“They all say that,” said Haney to K.O Artist Sports in reacting to being told that Kambosos said, ‘Pressure busts pipes.’

“You got to watch out because they’ll say that and then fight a different way. That’s why I say, he’s tricky. His durability, he’s durable,” said Haney when asked what’s Kambosos Jr’s best attribute.

“We got to see how durable he is. I can’t give him that. I don’t know. I’m going into the ring to see,” said Haney. 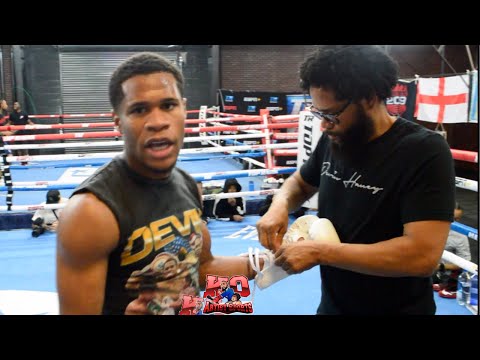