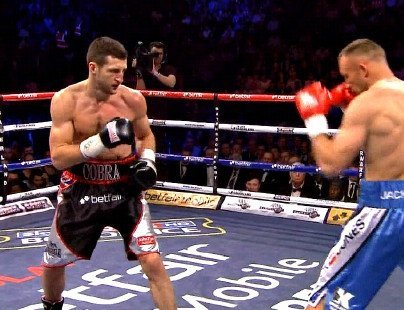 “If I don’t fight Chavez Jr in Las Vegas I will retire,” Froch said to BT Sport’s ‘Boxing Tonight’ programme as quoted by the Dailystar.co.uk. “If that fight doesn’t happen I will retire. Chavez has a massive following in America with his Mexican background. I think I can beat him, it won’t be an easy fight but business wise and don’t forget that professional boxing is first and foremost a business.”

Chavez Jr was a popular fighter a couple of years ago, but he’s lost fans and he’s likely not at the same level that Gennady Golovkin is in the United States. You can understand Froch not being too well up on things in the United States because he lives in the UK. Froch’s own poll on his Facebook site in which Golovkin wiped out Chavez Jr suggests that it’s Golovkin who is the far bigger star in the U.S right now rather than Chavez Jr.

It’s not that Chavez Jr isn’t a popular guy, because he certainly is with a segment of the U.S population, but he’s done nothing in so many years. The last big win for Chavez Jr was in 2012 when he beat Andy Lee, and I’m not sure that you can really call that a big win. Chavez Jr’s only wins since then have come against fringe level contender Brian Vera, and those weren’t big wins.

“People talk about [Gennady] Golovkin. He’s not PPV. They talk about Andre Ward, I don’t want to fight Andre Ward. He will probably beat me on points,” Froch said.

It’s refreshing that Froch is admitting that he can’t beat Ward, but it’s also kind of disappointing that he’s willing to steer around him in order to avoid a loss.

As far as Froch’s thoughts on Golovkin, it’s like the pot calling the kettle black. Yes, Golovkin isn’t a pay-per-view star in the U.S, but then again neither is Froch. Chavez Jr would be weighed down by Froch in a pay-per-view much more than he would if he were fighting Golovkin. Froch is basically dead weight for Chavez Jr because he brings nothing to the table due to him not being well-known in the U.S.

If Chavez Jr can share from Froch’s UK pay-per-view money, then it’s a good deal, but the U.S PPV money for a Froch-Chavez Jr fight likely will be poor. It’s just kind of strange that Froch is calling Golovkin a non-pay-per-view fighter when he too isn’t a U.S pay-per-view fighter. Froch would absolutely need Chavez Jr for his fight to be on U.S PPV, and I don’t think it would do well at all, certainly not close to the numbers a fight between Chavez Jr and Golovkin would do in the U.S. Golovkin is a much bigger star in the U.S than Froch. That’s just the way it is.