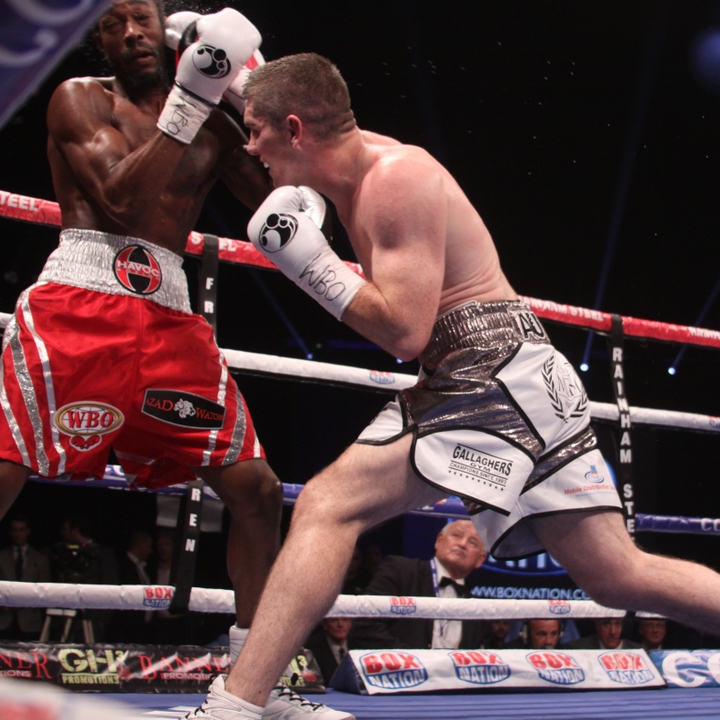 Diego Magdaleno (28-2, 12 KO) ran into a buzz saw tonight in the form of WBO lightweight champion Terry Flanagan (29-0, 12 KOs), who completely destroyed the 28-year-old Magdaleno in 2 rounds at the Manchester Arena in Manchester, UK. Before the mismatch was over, Magdaleno had been knocked down three times by Flanagan.

The fight wasn’t stopped until referee Terry O’Connor mercifully stopped in to halt the fight at 2:38 of the round due to Magdaleno being on the verge of getting seriously hurt.

In the co-feature bout, Liam Smith (21-0, 11 KOs) stopped #5 WBO John Thompson (17-2, 6 KOs) in the 7th round to win the vacant WBO junior middleweight title that had recently been stripped from Demetrius Andrade for failing to defend his title in over a year. Smith put the stork-like 6’1″ Thompson down with a big right hand in the 7th round that dropped him face first on the canvas. Thompson tried to get up but fell back down on his face.

Thompson fought well in the first five rounds in jabbing, pot-shotting, and keeping out of range of Smith’s occasional big shots. Smith came alive in the 6th round when he hurt Thompson with some jabs followed by a left hook to the head. Before the round ended, Thompson was in serious distress from a series of left hooks that Smith nailed him with.

Smith, 27, probably could have gotten Thompson out of there much earlier in the fight if he’d let his hands go in the first five rounds, because once he did start throwing his power shots in the 6th, Thompson couldn’t handle his punching power at all. Smith was just too strong for him, and there was no way that Thompson was going to be able to go the distance unless he started running.

The fight was stopped at 1:44 of the round. The victory gives Smith the WBO junior middleweight title, and he now could be fighting on December 19th on the undercard of the Andy Lee vs. Billy Joe Saunders card.