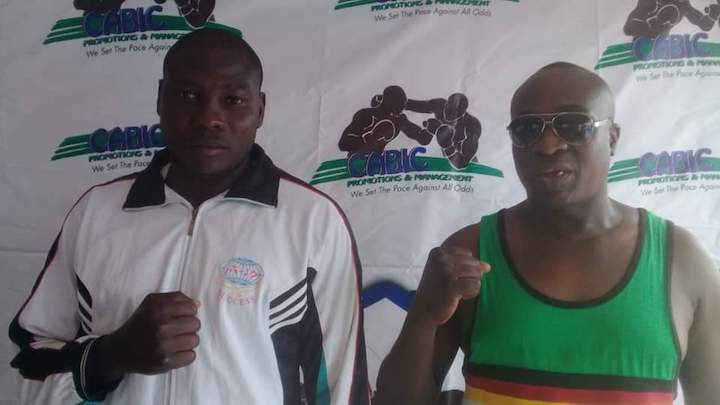 Undefeated Ebenezer Tetteh of Ghana (19-0, 16 KOs) and Morris Okolla of Kenya (11-3, 9 KOs) have set the stage for their Commonwealth heavyweight eliminator in Accra on Saturday night after both coming through their weighs successfully.

The undefeated Tetteh tilted the scales at 221.1 lbs whilst the Kenyan came in at 238 lbs at Friday morning’s weigh-in for Cabic Big Fight Night 3 put together by Cabic Promotions and Management at the Idrowhyt Event Center in Dansoman in the Ghana capital.

The fight is officially a final eliminator for the vacant Commonwealth heavyweight title, with the winner already scheduled to challenge highly rated Brit, Daniel Dubois for the British Empire belt in London on September 27.

Frank Warren’s Queensberry Promotions, who handle Dubois already announced earlier this week that Tetteh will face the undefeated Brit for the Commonwealth strap on the said September date but Anthony Kermah, CEO of Landmark Promotions who are co-staging tonight’s show in Accra with Cabic Promotions, emphasised that should Okolla emerge victorious over the home favourite, the Kenyan will thereby step up to the plate against Dubois next month.

It’s a second trip to Ghana in less than a year for Okolla who was on the receiving end of a round 10 TKO defeat at the Bukom Boxing Arena back on December 24 in a failed bid to capture the WBO Africa heavyweight belt from another Ghanaian, Richard Harrison Lartey who incidentally was stopped by the same Dubois in a fight for the WBO Global heavyweight title in London this past April.

But the Kenyan is adamant he will only return back to Nairobi this time with victory.

“I’m not here to joke at all because I want to set the record straight. I was forced to quit in the fight with Harrison because I injured my arm but everybody saw that I was winning so I’m happy to get this opportunity to execute my revenge on Ghana,” Okolla said after the weigh-in.

Read:  Boxing Casuals Get Their Version of Spence-Crawford In the form of Jake Paul vs. Tommy Fury

“Harrison got a lucky victory but Tetteh won’t be that lucky this time. I’ve prepared well and can confidently tell you that I will stop him, the fight will not travel more than 6 rounds,” the Kenyan added, confidently.

But focused on his world heavyweight title dreams and determined to win in style is the Ghanaian hailed as the ‘Pride of Avenor’ who has appealed to his fans and countrymen to throng the Accra Sports Stadium fight venue in their numbers to see him cruise to the win.

“He is joking, there is no way Morris Okolla can stop me, it’s a big joke and trust me to teach him some tough lessons in the ring tomorrow. He is going down so I entreat all my fans to come early so they can see the show for themselves,” said Tetteh, a former WBO Africa heavyweight champion.

“My avowed dream is to be a world champion and I can’t wait to show my skills against Dubois in London. It’s a big test but one that I’m ready for even though I’m not thinking of Dubois now, my focus is Okolla and I promise to silence him and send him packing back to Kenya,” Tetteh stated.

Meanwhile, also featuring on the bill scheduled for the Sports Hall of the Accra Sports Stadium is WBO Africa junior middleweight champion and world ranked number 12, Patrick Allotey (40-3, 30 KOs) defending the belt against Eric Kapia of DR Congo (22-3-2, 4 KOs) with a world title date against undefeated WBO junior middleweight world champ, Jaime Munguia of Mexico in the works for September 14.