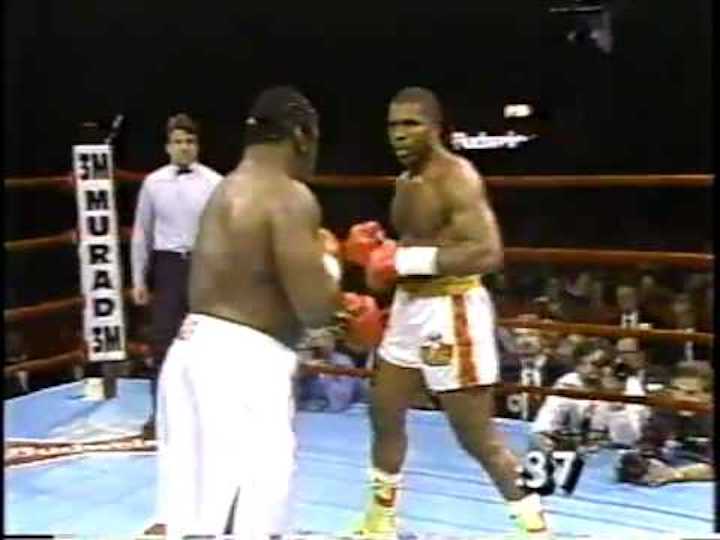 For some, the scary and brutal KO Donovan “Razor” Ruddock scored over Michael Dokes some 30 years ago this week (April 4, 1990) ranks as THE most destructive they have ever seen. In recent times, only Ray Mercer’s nasty annihilation of Tommy Morrison rivals it for most bloodcurdling heavyweight knockout.

Ruddock, largely unknown at the time, faced former WBA heavyweight champ Dokes at Madison Square Garden and it proved to be the Canadian’s coming out party. Dokes was past his best, and he had been battling drugs for some time, yet “Dynamite” had impressed many with his heroic effort against an unbeaten Evander Holyfield the year before; Dokes pushing Holyfield hard in a great, great fight. The 31 year old had won four straight since being stopped in ten rounds by “The Real Deal,” and some pundits and fans felt Dokes’ experience and still-fast hands would be too much for Ruddock.

Ruddock was 26 years of age and he had a good record, yet he wasn’t unbeaten. A young, raw Ruddock had quit on his stool after eight rounds against journeyman Dave Jaco in 1985. Ruddock said he had suffered an asthma attack but some critics wondered about his fighting heart. In time, over the years, in fights with the likes of Mike Tyson and Tommy Morrison, Ruddock blew away any suggestions he was lacking fighting heart. But first, “Razor” would blow away Dokes.

Ruddock was about to emerge as one of the most exciting and dangerous world heavyweight contenders, and Ruddock would also unveil his killer punch: “The Smash.”

READ:  Arum Says Joshua Vs. Fury Fight Can Be Made “Within The Course Of One Day”
https://www.youtube.com/watch?v=UuNIU9iwi3k

After three interesting rounds that saw both men have some success, Ruddock suddenly turned Dokes’ lights out in simply devastating fashion in round four. Three lethal left hands – uppercuts/hooks – violently collided with Dokes’ head, leaving the former champ in a crumpled heap, with no chance of getting up. Ruddock had stunned the crowd and impressed veteran commentator and former trainer of champions Gil Clancy, who said on air how Ruddock was the most impressive young heavyweight contender he had seen in years.

Ruddock KO4 Dokes was everyone’s KO of The Year for 1990.

Donovan Ruddock, who retired with a 40-6-1(30) record in 2015, and who never got a shot at a version of the world heavyweight title (barring the lightly regarded IBC strap that Ruddock failed to win in his thrilling loss to Morrison in 1995) was kind enough to recall his chilling win over Dokes for this writer.

“I fought a great former champion in Michael Dokes. Not too many people were giving me much of a chance going into that fight,” Ruddock, now aged 56, told me over the phone. “People thought he’d be too crafty for me. Dokes was in great shape for the fight, no doubt. He thought he’d beat me, they [my other opponents] all thought they would. Until they got in the ring with me and felt my power. That’s the fight when I unleashed “The Smash” to the world for the very first time. I had actually injured my right hand ahead of the Dokes fight, I kept it a secret. I worked very hard in the gym and I wanted a special punch so I could get the win in a spectacular way. I got it and then I knew I was ready. I wanted Tyson, I wanted the world title. I beat Dokes with basically one good hand. In terms of power, that fight was me at my best.”

Amen to that. Is Ruddock the best heavyweight of the 1990s never to have won a word title?