Demetrius Andrade views Canelo Alvarez as a hypocrite for giving grief about fighting nobodies and yet doing the same thing repeatedly for the last three years.

Like many boxing fans, Andrade (30-0, 18 KOs) is disgusted at learning that the superstar Canelo (57-1-2, 39 KOs) will be going up to cruiserweight to challenge the little-known WBC champion Ilunga Makabu in his next fight in early 2022.

Demetrius points out that Canelo is fighting a fighter that nobody knows in 34-year-old Makabu, and he feels that the Mexican star should be facing the top guys that fans are familiar with, like himself.

Supposedly, Canelo is going up to cruiserweight to challenge Makabu for his WBC title because he wants to capture his fifth division world title.

Canelo wants to cement his legacy by capturing as many division world titles as possible before he retires, and facing Makabu helps him further that dream.

It’s believed that if Canelo defeats Makabu, his next move will be to pick off WBC Bridgerweight champion Oscar Rivas next and then move up to heavyweight to take on WBA ‘regular’ champion Trevor Bryan before the World Boxing Association reduces the number of titles they have in the division.

For Canelo to capture an eighth and ninth division title, he would need to drain down to 147 and 140 to win belts in those weight classes. That’s not realistic, though.

If Canelo beats those three champions, it will make him a seven-division world champion.

“I’m doing whatever I need to do to get more and more to get to that point to get my name stamped in stone,” said Demetrius Andrade to iFL TV.

“There’s a famous quote, and the quote goes, ‘You’re a champion, but you don’t fight nobody,‘” said Andrade in recycling a remark Canelo Alvarez said about him last May when he called him out at his post-fight press conference following his win over WBO super middleweight champion Billy Joe Saunders.

“Yeah, you’re a champion, but you don’t fight nobody,” Andrade continued in reminding the boxing public what Canelo had told him earlier this year. Now he’s turned out to be a hypocrite by fighting obscure, weak champions in Saunders, Rocky Fielding, Caleb Plant, Callum Smith, and now Ilunga Makabu.

“That’s what Canelo said to me. I’m a champion, but I don’t fight nobody. He’s a champion and now look what he’s showing. He’s fighting nobodies.

“He’s going up to cruiserweight to fight somebody we don’t know when there are real fighters in the middleweight division that he could be fighting, but that’s his business.

“That’s what he wants to do, and whatever opportunities come up with the belt situation, if it makes sense for us, we’ll do whatever we got to do to become a three-division world champion, no problem.

It does seem disturbing how Canelo has gotten this mental hang-up that has warped his career, causing him to go after the equivalent of paper champions at 168 and now cruiserweight instead of facing the opposition the boxing world wants to see him fight.

It was bad enough that Canelo spent the last three years of his career becoming the undisputed super middleweight champion by beating these mediocre paper champions:

That’s three years of wasted time for Canelo because he could have done more for his legacy by using that time by fighting Gennadiy Golovkin, Demetrius Andrade, Artur Beterbiev, Dmitry Bivol, Joe Smith Jr., Jermall Charlo, and David Morrell Jr.

“You guys keep drilling me about the same names, but when you go ask Canelo and say, ‘Why didn’t you?’ You got to come up with a different way of wording things for Canelo, [Jermall] Charlo, or whatever,” said Andrade.

“It’s like, ‘Yo, if you ask him about Demetrius Andrade or if you bring up Demetrius, you’re going to be kicked out and banned, you can’t come to this type of s***.’ That’s bull s***.

“It’s like, ‘Yo, why is Demetrius a horrible fighter? How can you say that? He’s 30-0 with 18 knockouts and a 2008 Olympian. What makes him so horrible? If that’s the case, why do you fight these types of other fighters?’ Those are the questions that need to have the backlash to the type of fights we want to see.

“I want to see these fights, I want to make them happen, but I keep getting drilled with the same questions. Why do you guys keep asking me the same old s*** when it’s not on me. The answer is yes.

As stubborn as Canelo is, he’s not going to pay attention to the media because he’s too busy focusing on his goal of winning world titles.

Of course, you’re not going to see Canelo attempt to become the undisputed champion at cruiserweight because he’d be blown out by the talented champions Mairis Briedis and Lawrence Okolie. Canelo fighting those guys wouldn’t be fair to him because they would smash him.

If you’ve seen those guys fight, they’re much too big and talented for the 5’7″ Canelo to bet them.

“I’ve still got more to prove because I’m not satisfied all the way yet, but that’s because of what I have inside and what I want to prove to myself and to my family,” said Demetrius.

“Also, give the fans what they want to see, too is the middleweight division going at it and the best fighting the best.

“I hope he does bring it because that’s going to bring the best out of me as well and bring out tools that people may not have seen,” said Demetrius about him, hoping his opponent Jason Quigley brings his best self this Friday.

“Every time I step into the ring, it’s a different look, so let’s see what he [Quigley] brings into the ring, and trust me, I’m coming to stop him,” said Andrade.

#10 WBO Jason Quigley (19-1, 14 KOs) will be a small speed bump for WBO middleweight champion Demetrius Andrade (30-0, 18 KOs) this Friday night, November 19th, at the SNHU Arena, Manchester, in New Hampshire. The fight will be shown on DAZN. 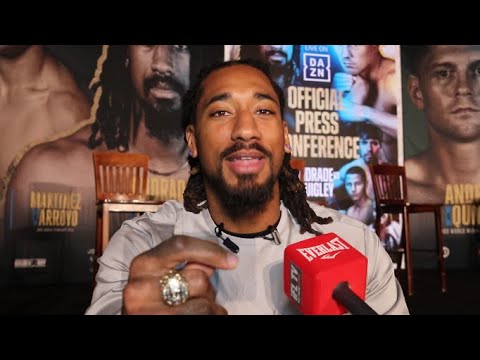