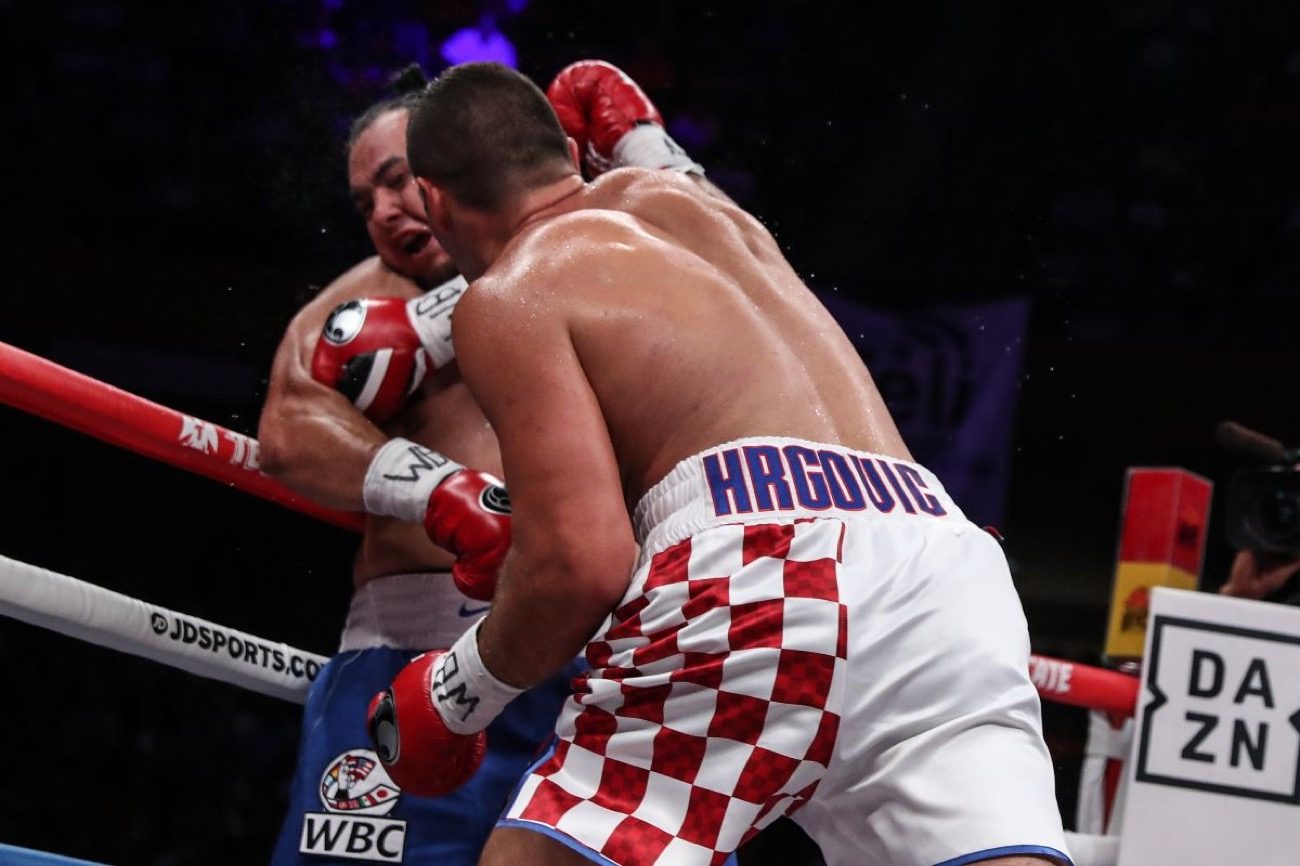 Twelve thousand Mexican fight fans got to witness ‘El Animal’ in action as the highly ranked Croatian sensation took just three rounds to dismantle the experienced Heredia, with a thudding right hand knocking Heredia onto the canvas before the referee waved off proceedings.

“The crowd was absolutely fantastic, it was an honour to fight for the Mexican fans tonight,” said the undefeated Hrgović. “Step by step I’m climbing to the top. I was asked what I think about fighting on the Anthony Joshua card in Saudi Arabia. I’m grateful for the opportunities and I’ll fight anyone. I’m expecting a big name so I can show the world who I am.”

“Filip Hrgović is the most exciting heavyweight of the new-era,” said Sauerland. “It won’t be long before he gets his opportunity to put his name in the history books.”

“Filip has taken another stop on his road to success and people are now sitting up and taking notice,” said Sauerland. “Filip is the future of the heavyweight division, and it’s just a matter of time until he gets his shot.”

Hrgovic vs Heredia Saturday In Mexico, Live on DAZN

The unbeaten heavyweight sensation makes a quick return to the ring following his explosive first round KO win in Maryland in May over Greg Corbin.

The Croatian star will be aiming for KO number seven in Mexico and defends his WBC International title against an in-form Mexican in the shape of Heredia who enters the bout on the back of a split-decision win over former World title challenger Samuel Peter in April.

“I’m looking forward to fighting Mario Heredia in Mexico,” said Hrgović. “I’m expecting a good fight and I will train hard for him like I do for every opponent.

“Mexico is not a new place for me if you look at my amateur career. I have already fought twice in Mexico in the World Series of Boxing back in 2013 and 2014, and both fights I won, so I’m really looking forward to fighting there again.

“I was very satisfied with how my first fight for DAZN in American went. It couldn’t have gone better for me really. I introduced myself in a special way.

“Gregory Corbin was a tough fighter and nobody expected a KO in the first-round. I showed the American audience what they can expect in my upcoming fights. I was only in the ring 60 seconds last time. We will see how much time I spend in the ring this time. I don’t want to underestimate anybody.

“I had three weeks off after my last fight and it was good to rest and recharge my batteries. I have already started my camp in Zagreb and will continue in Miami. I train hard in Zagreb with Yousef Hassan and Igor Cordas, while Pedro Diaz is waiting for me in Miami with my final tactics.

“I’m excited to fight in front of the Mexican fans. I know they are huge boxing fanatics and I’m sure they will appreciate my style, no doubt about that.”

“Following his devastating KO win over Gregory Corbin, we’re excited to see Filip back in the ring,” said promoter Nisse Sauerland. “We’ve said for a long time that he is the future of the heavyweight division and people are now starting to take notice. His World title charge continues on August 24 in Mexico, where fight fans can expect another show stealing performance.”

Filip Hrgović (8-0, 6 KOs) is promising excitement as he travels to Hermosillo, Mexico for a defence of his WBC International Heavyweight title against Mario Heredia (16-6-1, 13 KOs) on Saturday, August 24, live on DAZN in the US and Sky Sports in the UK.

The Croatian boxing sensation returns to action following a first-round knockout win over Gregory Corbin in Maryland, and will be aiming for knockout number seven against the in-form Mexican at the Centro de Usos Múltiples.

“This is what I live for, every day of my life,” says Hrgović. “Boxing makes me feel alive. My preparations have gone perfect and I can’t wait to step in the ring again.

“I had four weeks in Zagreb with my coaches Yousef Hassan and Igor Cordas before going to Miami for a six week training camp with Pedro Diaz. We have done some things differently this time, which you will see on August 24.

“I’m feeling great and ready for my next victory. I hope it is going to finish like my last fight, but we will see. Knockouts are always more attractive for fans but if the fight continues round by round, I’m more than ready for that option as well.

“Either way, the fans can expect good boxing show, for sure. They are all familiar with my boxing style, and no doubt, I will give them an exciting fight!”

HRGOVIC PLANS TO PUT ON A SHOW IN MEXICO

‘El Animal’ Filip Hrgović (8-0, 6 KOs) is excited to put on a show for the Mexican fans as he takes on the in-form Mario Heredia (16-6-1, 13 KOs) in Hermosillo tomorrow night, live on RTL in Croatia, DAZN in America and Sky Sports in the UK.

Having made his US debut at the MGM National Harbour in Washington on May 25, the man known as ‘El Animal’ is looking forward to fighting in front of Mexican fans for the first time as he takes another step towards a World title.

Hrgović, a 2016 Olympic bronze medalist, has beaten three Americans in his last three outings and is hoping to channel the notorious Mexican fighting spirit and give the fans a night to remember.

“I respect the Mexican people, I like this country for all the warriors that they have given the sport of boxing,” said Hrgović. “People like Morales, Barrera, Cháves, Canelo and a lot more. I’m excited to fight on this event and on DAZN.”

Hrgović’s Mexican opponent Mario Heredia, is coming off a victory against former WBC World Champion Samuel Peter and is hoping to impress in front of his home crowd.

“Finally I have got the opportunity that I was looking for, for years,” said Heredia. “This is the fight of my life and I will not waste it. I have never lost here in Hermosillo and I will continue with that mark.”

The Croatian heavyweight sensation endeared himself to the Mexican public whilst wearing a sombrero at Thursday’s press conference, and promoter Nisse Sauerland feels it won’t be long before Hrgović is a global household name.

“Filip is already a superstar in Croatia,” said Sauerland. “Fighting in different territories helps to showcase Filip’s abilities and personality to as many fans as possible. It won’t be long before he is fighting for a World title, maybe against Mexico’s own, Andy Ruiz”

Filip Hrgović against Mario Heredia will be broadcasted live around the world including living on RTL in Croatia, DAZN in America and Germany and Sky Sports in the UK.